With the publication of Trotsky: A Biography , Robert Service, a professor of Russian history at Oxford and an outstanding authority on the Russian Revolution, has completed a biographical trilogy treating the main architects of Soviet Communism. His Lenin was published in 2000, followed by Stalin in 2004. The subjects of those earlier works offer an author the advantage of having possessed relatively uncomplicated personalities: Both Vladimir Lenin and Joseph Stalin fit Isaiah Berlin’s classic definition of the hedgehog, who knows “one big thing.” Leon Trotsky, on the other hand, exemplifies the fox, who knows many things. 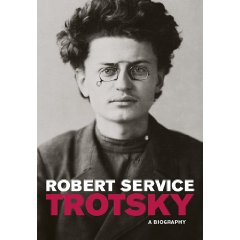 Lenin was a single-minded insurrectionary; Stalin was an equally committed bureaucratic manipulator. But the things Trotsky knew ranged from military tactics to cultural criticism and were expressed with notable literary proficiency. Trotsky also seems more complex than the other two in that both Lenin and Stalin appear to us as distant, alien figures confined in the redoubts of the Russian past; Trotsky, after his expulsion from Soviet Russia in 1929, became a fuller participant in modern culture. In the greater sense, Lenin and Stalin were seekers after power and gained it. Trotsky, by contrast, lost what power he possessed. Unlike the other two he never stood at the summit of the state. Yet Trotsky, alongside Lenin and as head of the Red Army, was, for a time, the Soviet state’s second most eminent figure.

What accounts for his fall? Some commentators have claimed he was inept; others, that he was vain. Either way, his defeat is typically explained by his own mistakes, and he often is treated with contempt. After all, Stalin won”and victory, for many, is its own justification. Service has a simpler”and even, I suspect, for most readers surprising”explanation: “Trotsky lacked a firm desire to be the leader.” For some, that may be a basis for criticism; for others, it may appear rather admirable.

Service is, at times, remarkably complimentary to his subject, although he balances his narrative with severe condemnation of the brutal actions Trotsky approved and advocated, both as a state official and as a revolutionary. Finally, Service argues, Trotsky “was close to Stalin in intentions and practice. He was no more likely than Stalin to create a society of humanitarian socialism even though he claimed and assumed that he would. Trotsky failed to work out how to move from party dictatorship to universal freedom.” This judgment encapsulates the contradictions of the Trotsky story: If Trotsky was “close to Stalin in intentions,” it seems impossible to accept that the latter ever would have been concerned with “universal freedom.” And the “society of humanitarian socialism” Trotsky envisioned was doubtless unlikely of achievement simply because, in the old and often-disdained argument, it was against human nature.

But Service also informs us that Trotsky “did not like to fight dirty” and had “a becoming modesty.” Service ascribes qualities to Trotsky, in the realm of Soviet policies, that never could be imagined in Stalin. Trotsky did not want to abandon Lenin’s New Economic Policy (NEP), which had restored freedom of private trade in Bolshevik Russia. Trotsky also “accepted that the Soviet economy would require a private sector for the foreseeable future.” He always insisted that the collectivization of agriculture should be voluntary. Within the ruling party structure, he “proposed freer modes of discussion” and “demanded the restoration of the elective principle for party posts.”

Service, probably correctly, judges that these democratic conceptions would not have produced a more humane communism. Nevertheless, they contrast starkly with the Stalinist ban on internal discussion and imposition of officials from above through fake elections. Additionally, Trotsky differed with the militantly antireligious Lenin; instead of the devastation of Russian Orthodoxy that Lenin carried out, Trotsky proposed the encouragement of a “Renovationist” reform movement among Christian believers.

Service also points to a feature of Trotsky’s makeup that certainly contrasts with Stalin and that has been treated delicately, even by most Trotsky biographers. Although he was an atheist, Trotsky identified himself as Jewish by nationality and never wavered from a defense of the Jews, as a people, from oppression. He declined to accept responsibilities as head of the secret police and as Lenin’s immediate subordinate because he feared that naming a Jew to such posts would stimulate anti-Jewish prejudice. Trotsky at first resisted appointment as military chief for the same reason, but his objections were overcome. As Service notes, “He wanted the best for all nations in the USSR””another contrast with Stalin, a non-Russian mix of Georgian and Ossetian who was, nonetheless, a Russian ultra-nationalist in his outlook. With Hitler’s triumph in Germany, Trotsky concluded that the protection of Jews from extinction required “a specific set of measures””measures that, eight years after Trotsky’s murder in 1940, would be embodied in the state of Israel.

Thus, Service finds himself caught between his justified revulsion at the Bolshevik narrative, which he has come to know in detail, and the un-Bolshevik characteristics that Trotsky never truly gave up. A major part of the Trotsky chronicle traces the evolving story that began with his early personal association with Lenin, starting in 1902”a relationship that remained positive for less than a year. In mid-1903, the revolutionary Russian Marxists held a party congress in Brussels. There, they split over Lenin’s demand that membership in the party be limited to those who worked actively for the organization. Lenin’s opponents saw in this demand an authoritarian trend toward the formation of an activist elite separated from the lives of ordinary people. Trotsky shared the opponents’ doubts and sided with those who were against Lenin. Trotsky did not join Lenin’s Bolshevik faction until shortly before the latter seized power in 1917. Trotsky had spent several years as the sharpest Marxian critic of Lenin’s political habits, and when the moment for unity came, he insisted, “I cannot call myself a Bolshevik . . . . Recognition of Bolshevism cannot be demanded of us.” Faced with the probability that any chance at radical revolution might be lost, Trotsky succumbed and accepted Leninism.

Trotsky’s life story is filled with unexpected events and responses to them, most of which Service has handled adroitly and eloquently. Service is at his best when he writes about the subjects he knows from original sources: Bolshevism and its background in the Russian social environment. He expressively details Trotsky’s origins in the prosperous Jewish agricultural class of Ukraine, his youth in Odessa, and his inevitable gravitation to the clandestine anti-tsarist movement. When he met Lenin, Trotsky had already been exiled to (and escaped from) Siberia. In 1905 the first Russian revolutionary outbreak of the twentieth century propelled Trotsky to the forefront of the protest movement as a speaker and writer who was not part of Lenin’s cadre of followers. For his activities Trotsky was tried and imprisoned again and, once again, escaped; this time, he moved to Vienna. He enjoyed success as a journalist, writing for the liberal press inside Russia as well as for small émigré journals. Although Service treats the topic lightly, Trotsky produced powerful polemics against Slavic imperialism while covering the Balkan Wars of 1912“1913.

From the start of the First World War in 1914 to his ejection from Soviet territory only fifteen years later, Trotsky led a life inseparable from movements, people, and events that are, for the most part, unknown to today’s general reader. While most of the mass socialist parties of Europe rallied to support their belligerent governments in the war, the Russian labor left and a handful of others proclaimed their opposition to the conflict. Slowly, as Russia demonstrated its organic weakness in combat, the radical alternative took shape. Trotsky participated in the step-by-step evolution from disaffection to revolution, served the new Bolshevik regime, and then fell victim to”or deliberately held himself aloof from”the internal dissensions within the new Muscovite order.

Service is meticulously accurate in his description of Trotsky’s Russian rise and fall. Still, his account likely will prove intimidating to readers as they encounter a wilderness of political controversies, names, and battles that were mysterious to the outside world even in Trotsky’s day and were hidden further by the censorship of the Stalin regime and the indifference of most Western scholars to the minutiae of Bolshevik infighting after Lenin’s death in 1924. In one fascinating passage, Service notes that Lenin died only a week after hearing that Stalin, now dominant in the Bolshevik apparatus, had threatened Trotsky with removal from the party’s central committee. Trotsky’s place in the Soviet party and the vocabulary associated with his struggle”“world revolution,” “the left opposition,” and so forth”are barely understood today, even by people concerned with Russian history.

For most contemporary readers, the post-banishment Trotsky remains a more vivid figure. His attempt, after Stalin expelled him from the Soviet Union, to create a revolutionary network in competition with the Soviet-directed Communist International failed. He showed exceptional tenacity, however, as he pursued his denunciation of the members of the Moscow regime as traitors to the revolution. Nearly all of his immediate family members were killed by Stalin or met other tragic destinies, and Trotsky was forced out of asylum in several successive countries before arriving in Mexico in 1937. There, in 1940, he was brutally murdered. While in Mexico, although he was devoted to his second wife, Natalia Sedova, he became involved in a romantic affair with painter Frida Kahlo, the wife of the world-famous Mexican artist (and communist) Diego Rivera. That affair has, in a matter for irony, kept Trotsky’s memory alive in cultural circles, among people for whom Lenin and Stalin are mere names on a page.

Given Robert Service’s professional dedication to Russian history, it is perhaps to be expected that he handles Trotsky’s last years with less certainty than he does his subject’s experiences through revolution, party disputation, and war. Perhaps the most egregious error in the book comes when Service identifies the French surrealist poet André Breton”a Trotsky admirer who joined him in composing a manifesto in defense of artistic freedom”as “a painter” whose “pictures exhibited sympathy with the plight of working people.” Breton never painted pictures (he produced some collages), and he was a resolute foe of “proletarian art.” The relationship with Breton figures prominently in almost every other book about Trotsky; some volumes have been dedicated to the relationship alone. This and other such gaffes suggest that once away from his familiar milieu, Service worked too superficially and hastily. Nonetheless, he has produced a valuable handbook on the life of one of the twentieth century’s most fascinating”and still puzzling”personalities.

Stephen Schwartz is a widely published journalist and author of The Two Faces of Islam.