This issue marks, as you may have already noticed, the redesigned layout of First Things . The blame for all this belongs solely to me, the editor, for I’m the one who decided that the old layout had grown tired and stale. There has been, over the twenty years of the journal’s history, something self-assured and unapologetic about the purity of the unaesthetic presentation”a declaration that text is what matters and visual frills are a weakness for others to indulge.

These days, however, the Internet has taken over many of the purposes of magazines, including the task of simply making text available. Indeed, in certain ways, the Internet works better than the old system of print, if the goal is purely to make reading material available to the public.

That seems to me much too small an editorial goal. Not wrong, you understand, but somehow diminished and constrained as an aim. A magazine is more than the print edition of what can now be done more quickly online. First Things is about the words it contains, but it must also be about the things those words can do in a magazine .

We have experimented with pictures over the years, illustrating an occasional architecture article and running, back in the 1990s, a year-long series of glossy-page photographs of Christian signs from across America. But none of those quite clicked in the layout at the time, for they required something more systematic and complete about the visual presentation of the journal.

And so we have now undertaken the redesign that begins with this issue. In the public discussions of America, First Things works for several things. The fight, for example, with those who want to strip the world of its religious clothing and create the naked public square. The long struggle against the murderousness of abortion. The attempt to sort out the good of modern democracy and science from the horrors that have emerged through what we insist are wrong turns taken in the name of modernity. And, most of all, the effort to be physicians to this Iron Age in which we live”the effort to reinvest the world with the richness, thickness, and freshness that is found only in truly God-haunted nations and societies.

But, as a magazine, First Things also works to preserve the high culture of intellectual journals: a culture that is fading under pressure from the Internet, from the weak American financial situation, and, not to mince words, from the absurd decline of print standards in this country.

Most of all, American magazines these days seem to have given up on elegance”and so we decided to demand art covers, and interior photographs, and fine text layout.

In other words, First Things defiantly refuses to accept the diminished condition of American print today. The object in your hands must be a pleasure to hold and read”or what good is a printed journal, with the cacophony of the Web sounding all around us?

The new layout is intended as an announcement that we will do what we have always done, and more besides. The essays will be the deep and serious intellectual endeavors they have been before, marked by the rag paper interior. And wrapped around those essays will be illustrated pages that raise, on a hilltop, the old banners of beauty in print.

Readers hate change, for a while. There is a pattern in such things, and every redesign creates controversy”and rightly so, for, as our founder, Richard John Neuhaus, once described a friend of the magazine, “He’s a conservative by temperament , one of the people who would have complained on the second day of Creation.” 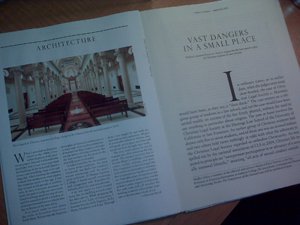 And, as I said, the blame for the redesign, if blame there is, should fall on me. The credit, however, goes to others. To David Blum, our new executive editor”a true editorial pro, who, in addition to his distinguished magazine and book writing, recently ran and revamped such publications as the Village Voice and the Harvard magazine 02138 . To Mary Rose Rybak, our managing editor, whose organizing skills and upbeat nature made a stressful process almost pleasant. And to Luke Hayman, a National Magazine Award“winning partner of the Pentagram design house, who, together with his designer Shigeto Akiyama, creatively fulfilled the nearly impossible demand that First Things announce visually that it is what it has always been and more.

This redesign is intended as a declaration. It’s an announcement that this is a journal unlike any other in the world. That we will not pander. That we defy the small and weak-willed trends of our diminished moment. That beauty, and text, and content, and presentation, and the experience of reading all matter”and matter greatly, to us and to the world in which we live.