It was a bad day for a funeral; name a day that isn’t. But this one came in a period of family turmoil in the middle of last month. My mother just admitted to a nursing home and exhibiting severe dementia; my father lost without her; and me at Day 6 in a ten-day course of antibiotics for a sinus infection that had knocked me flat for the first four days. Along with my own sadness, dealing again with death, I felt ravaged by life, slightly dizzy from the medication, and I had dry mouth on top of it, never much of an aid to preaching and liturgical leadership. 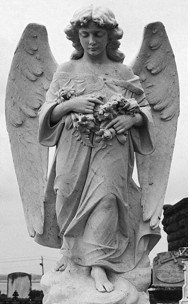 The funeral was for Andy, who yielded to Parkinson’s disease at age seventy-one. I had first met him almost eleven years ago to the day. He was diagnosed back in 1994, a long time with that cursed affliction. I carried Holy Communion to him in all that time; he attended Sunday Eucharist only once that I recall.

Andy had been a priest of the Archdiocese of New York, serving a parish in Manhattan for five years after his ordination from St. Joseph’s seminary. Priesthood did not suit him nor, it must be said, did he suit it. He came from a strong Catholic family and, in his case as I understand it, was designated as the family’s gift to the ministry. He resigned from active ministry and, instead, became a probation officer with the State of Missouri.

That sounds downright drastic, doesn’t it? I mean, moving to Missouri. But that’s where he could find a job that fit his master’s in behavioral science. Here in Kansas City he met a nice woman; they married and had one daughter, a child of his middle age, who graduated college only weeks before his death. He had become Lutheran because his wife did not wish to become Roman Catholic, and he thought the doctrines held between Wittenberg and Rome seemed most coincident.

I hated doing Andy’s funeral. I have come to hate all funerals, which is pretty opposite of what most pastors will say. It is said among clergy”said so often by now the secret is out, and lay people know it too”we pastors would rather preach at a funeral than at a wedding. The funeral, we assure each other, is an opportunity to really, really, really preach the gospel because everybody who needs to hear it is there and ready to hear it. There is some hope, real and genuine, to be said at a funeral, hope for a little something beyond the confines of this life.

Weddings are not like that. Weddings often, usually, entail some genuinely tasteless moments (like the pregnant bride who thought it would be cute to have Yummy, Yummy, Yummy, I Got Love in My Tummy as a wedding solo; relax, I didn’t let it happen). They are profligately expensive. People wear funny, extravagant costumes, and, if the groom is “Country Bob” with his cowgirl bride, they expect the right to decorate the sanctuary with bales of hay, just to help set the theme. People spend far more time planning a wedding, girls saying yes to the dress, than they do their marriage. Pastors, on the whole and this one in particular, are pretty cynical about weddings.

In fact, the more cynical I am on the subject, the easier wedding sermons become. I hardly give them a second thought any more. Recite the biblical expectations of marriage; two minutes, tops, not counting time outs for yawns. Take another five minutes to explain why they need to learn how to forgive each other (humor works here) to reinforce the areas a pre-marital inventory revealed as weaknesses, and move on to the vows. Who listens?

But funerals deplete my strength. There is my own sorrow, to begin with. My grief, the real grief of death, never comes over me until the service begins. There is no other time where I may just sit, reflect, and let the emotions run over me, because I have had no time. I have spent two intense days or a little more from the time of the death to the time of the funeral dealing with undertakers, family, bulletins, Scripture selections, visitation, and all the attendant details from what hymns should be included to whether there will be a family eulogy, on down to deciding whether the family wishes to follow the casket in procession or be seated with the congregation ahead of the service.

For these reasons and others I have found it impossible to write a funeral sermon at any other time except on the morning of the funeral. Through those two or three days from death to burial my mind has been racing. What can I say? What should I say? How should I say it? Where is the gospel, here? If I were just preaching bromides with a prayer at the end”you’ve heard them”it wouldn’t be nearly as difficult. But my approach to a funeral sermon is to try and show how this life in some way tells the rest of us something about the gospel, of God’s unfailing love for humanity. Sometimes it is not the life that tells us anything, but the manner of death. Either way, every Christian life has a story and every story may be told through the gospel. A sermon like that will first of all be a true sermon, a sermon that names things for what they are, that describes the condition we are in and why we are in it, with the remedy of Jesus Christ at hand.

I attended two funerals in 2010, for old family friends, one Lutheran, one Presbyterian. The sermons were flat affairs, both of them. It seems most of the passion at a funeral shows up in a family tribute. Family remarks are a way of publicly saying how significant is the family’s loss and how deep was their love for the deceased. The family, it seems, must do this because neither sermon I heard ever got around to it. More shockingly, there was no gospel; not a word of Jesus’ death for us, with us. Not a word of why Jesus died and how he died. And even less was there anything of resurrection. There was no word of God snatching us from the folly of our own sin. No word for us on God rescuing us from the pallid hall, preserving us from the ultimate entropy of death and decay.

What did I hear? I heard a sort of logical progression on the virtue of being nice. I heard the dead person was a nice man, a nice woman, now rewarded with something nicer than this life. That is not the gospel.

I persist in this notion, an intuition if you like, that the life of every Christian tells us something about how the gospel gets lived, how ordinary Christians with greater and lesser degrees of faithfulness managed to do it. There is a lesson in the lives of the saints rightly remembered that may be properly noted. I try to summarize that from within the gospel. I seek hints from this life, now mourned in death, that help me illuminate the gospel that animated this life, whether the deceased consciously knew it or not. I look for what needs to be said for and about this life for these people gathered for this occasion, to mark and remember the death of a fellow Christian, and then I try to say it.

Yet it is only on the morning of the funeral, sometimes very early morning, after everything has tumbled around that my funeral sermon seems to coalesce, and I know what to say. Often, almost always, I write it for myself as much as for anyone else. I have to understand this death and what it means for the Christian faith, my faith.

And for Andy? I had to say what he said to me. Parkinson’s wasn’t a day by day affair; not even hour by hour. Those time frames were too broad. No, he lived it moment by moment, frozen in one, incoherent in speech and movement in the next. But there were moments of brief relief amid progressive loss. He would think of St. Paul’s “momentary affliction” in preparation for a “weight of glory.” He learned to live his faith the same way he had to live his illness. That’s what I said of Andy.

And now, all that done and decided I am virtually overwhelmed by my own feelings, feelings I have managed to postpone until the moment the entrance rite is recited. It is a rare funeral where I do not give way to tears. With luck I will merely choke my way through the hymn of the day following the sermon. But sometimes, standing before congregation and casket, the sermon or maybe the Eucharistic Prayer is marked (or marred) by periods where I must pause to regain my composure. Well, Jesus wept at the tomb of his friend. Why can’t I?

So, yes, all things considered, I’d rather do a wedding any day.

Russell E. Saltzman is pastor of Ruskin Heights Lutheran Church, Kansas City, Missouri. His previous On the Square articles can be found here .