For two years, we have lived in a forest on the convergent lower slopes of two mountain ranges, and above a shallow wooded ravine that descends to a narrow streambed on our side and rises up on the opposite side towards the high ridge that looms above our treetops to the west. During our time here, that mountain has been a commanding and magnificent presence for us, seeming at times almost impossibly near at hand, at other times forbiddingly remote, but always silently, sublimely watchful.

Nearly every morning, no matter the season, it is mantled in clouds, sometimes so heavily that it disappears altogether behind opaque walls of pearl-gray mist.

And nearly every evening, as the sun descends below its ridgeline, the whole mountain is briefly crowned in purple and pale gold, and the southwest horizon, where the ridge descends, is transformed into a gulf of amethyst, rose, and orange.

When the darkness falls, moreover, there is none of the dull rufous pall that the glare of city lights casts up to hide the stars in heavily populated areas. 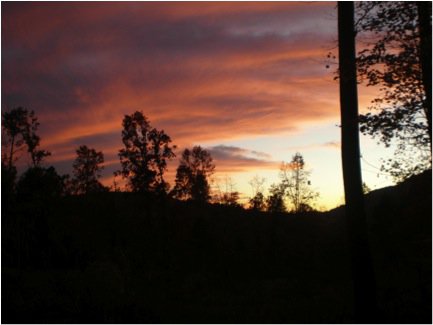 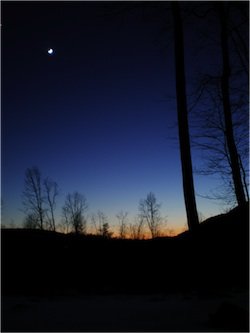 Here in our shady submontane seclusion, cool breezes constantly blow down from the peaks above, and through the southern pass, even during the hottest months of summer. The soughing of the trees rises and falls as the gusts strengthen or weaken, but never wholly abates, and the sunlight”reaching us through the filtering leaves”incessantly flickers and undulates around our house. The birds are so numerous and various that their songs blend inextricably together, and only occasionally can one momentarily recognize a particular phrase”a goldfinch, say, or a cardinal”before it merges back into the larger polyphony. Then only the short, sharp staccato of the woodpeckers is immediately recognizable.

Just now, however, the more dominant music here is the oddly sweet mixed chorus of the woodland frogs, especially at night, but throughout the day as well. The rain this spring, here as in much of the country, has been heavy and regular, and so the ditches are full to overflowing, and gleam like silver when viewed at an oblique slant. The smaller depressions at their edges, also full of water, catch the reflections of overhanging leaves, and the green mingles with the gray of their silt in such a way that they often look like pools of jade. When one comes nearer, however, all the standing water is quite clear and filled with small black tadpoles. Next year’s frog choruses will be louder.

Life abounds under the brow of the mountain. All the woodland creatures one would expect, great and small, are here”deer and black bears, glistening black snakes and tawny foxes, Ruby-Throated Hummingbirds and owls and Blue-Tailed Skinks, and so on. The butterflies at the moment are becoming quite plentiful; there are Black Swallowtails, Zebra Swallowtails, Tiger Swallowtails, but also Red Admirals, and Painted Ladies, and a host of others. And azure and emerald and opalescent beetles and flies are now appearing as well. 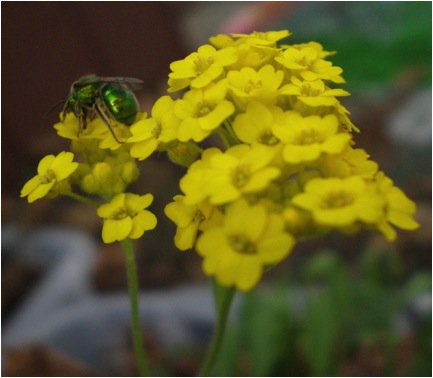 (That photograph, I should note, was taken not by me, but by my wife.)

The mountain ridge can be reached by foot, if one is willing to make the effort. The best passage to the top lies northwest of our house, and one must follow it first down into the ravine, into its green depths, through the shadows of its deciduous trees and immense Loblolly Pines, over carpets of moss and ferns and creeping juniper, and across the narrow stream that just now is coursing quite vigorously. The best path”not the easiest, but the most idyllic”lies across a small waterfall created by a thick tangle of oak and Asian Tulip roots over a minor subsidence in the soil. Mountain laurel is extremely plentiful in the ravine, and at present is in full blossom. Bronze and golden box turtles lurk in the shade and by the water.

The ascending slope from there is quite gentle at first, and only becomes an arduous climb at a few places. In all, it takes only about two hours to reach the ridge if one keeps moving. If one sets out well before dawn, and arrives at the top in time to see the sunrise, one will find oneself walking as much in the clouds as through the trees, and there is a brief period (twenty minutes or so) when the sunlight first reaches the ridge, at a sharply lateral angle, and one is all at once passing through shifting veils of translucent gold. Unfortunately, it is an effect that no photograph can capture: invariably, it is not only the rich aurous lambency of the scene that is lost, but the impression of depths within depths, layer upon layer.

In any event, I can do none of this any justice. To describe the place with anything like the detail or lyricism it merits would be a long, and perhaps interminable, task. I have relied on pictures simply because I do not quite have the words right now. In a week, we will be gone. Family responsibilities necessitate our moving to a larger house”one very pleasantly set in a grove of tall tress, but not watched over by our mountain. I simply feel as if it has been a rare privilege to live here for the time we have had, and that I ought to pay some tribute to the place before leaving, out of some sense of honor or natural piety. 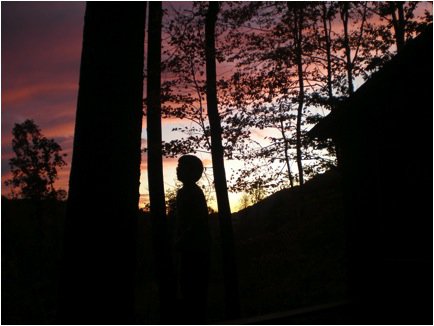 So one last photograph. I actually took it soon after our arrival here, as my son (age ten at the time) was watching the sunset for the first time from our porch, over the small open glade to our southwest. But at the moment it seems to capture something for me, a mood at once of delighted wonder and deep sadness. It comes as close as I can at present to expressing the farewell that I want to wish this house and that mountain. It is a melancholy with which I suspect we are all familiar at some level, as individuals and as a race, something that haunts us and of which my sadness is only a fragmentary reminder”the feeling of having lost paradise.


David Bentley Hart is contributing editor of First Things . His most recent book is Atheist Delusions: The Christian Revolution and Its Fashionable Enemies (Yale University Press). His other “On the Square” articles can be found here .