In recent years, much work has been done to restore the traditional principles of church design; one principle, however, is still often overlooked: siting. St. Germanus is brief and clear on the subject, as always. In the final section of Ecclesiastical History and Mystical Contemplation , which deals directly with architectural matters, he says:

Praying toward the East is handed down by the holy apostles, as is everything else. This is because the comprehensible sun of righteousness, Christ our God, appeared on earth in those regions of the East where the perceptible sun rises, as the prophet says: “Orient is his name” (Zech 6:12); and “Bow before the Lord, all the earth, who ascended to the heaven of heavens in the East” (cf Ps 67:34); and “Let us prostrate ourselves in the place where his feet stood” (cf Ps 67:34); and again, “The feet of the Lord shall stand upon the Mount of Olives in the East” (Zech 14:4). The prophets also speak thus because of our fervent hope of receiving again the paradise in Eden, as well as the brightness of the second coming of Christ our God, from the East.

Note in his last sentence St. Germanus mentions two goals: Eden and the Second Coming. Thus one’s movement through the church building, from west to east, darkness to light, front door to Sanctuary, is a metaphor for the personal Christian life: conception in original sin; baptism and life in sanctifying grace; increasing sanctifying grace through a life of virtue assisted by the sacraments; and finally, death, judgment, and (we hope) the Beatific Vision, that is, Eden. This structural orientation is also a metaphor for all of salvation history: from the Old Testament age of prophecy, to the New Testament age of grace, to the Second Coming and the end of the world.

There is a prominent exception to this basic rule for church siting. The earliest church buildings in Rome, built centuries before St. Germanus was born, were oriented in the exact reverse direction, that is, with the doors to the east and the sanctuary to the west. The priest in these churches stood on the west side of the altar and effectively faced the people on the other side. Liturgical scholars tell us that, at a certain point in the Mass, the assembly turned around, the church doors were opened, and all faced the rising sun in the east.

So far as I know, we can only speculate as to why these basilicas were sited this way. Three reasons are commonly offered: first, it may have been to accommodate the confessio , the tomb of a saint located underneath the high altar, often with steps leading down to it (as at St. Peter’s Basilica in Rome), or the sanctuary and altar can be raised up a few steps so that the confessio is at the same level as the nave (as at San Clemente, for example). Either way, a small, simple confessio prevents the celebrant from standing on the same side of the altar as the congregation. Second, it may have been an attempt to imitate the Temple at Jerusalem, whose doors were to the east, and Holy of Holies to the west. Finally, some claim the orientation was intended to imitate synagogues, which pointed toward the Temple at Jerusalem. 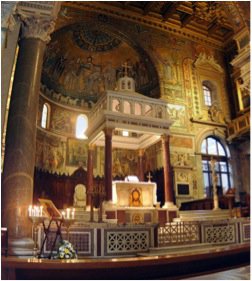 The confessio below the high altar at Santa Maria in Trastevere
makes it impossible to say Mass from the assembly’s side of the altar.

St. Germanus’ explanation of the symbolism of the parts”that the sanctuary is Christ’s tomb; and that the apse is the cave in which He was buried; and that the altar is the spot in the tomb in which Christ was placed suggests a fourth possible reason: as one moves from east to west, from light to darkness, one joins Christ’s Passion, death, and burial. When one turns around part way through the liturgy and moves from west to east, one is joined to his resurrection and ascension, and is ready to greet him when he comes again.

As beautiful as the architectural symbolism of this reverse orientation is, it strikes most people as a rather awkward arrangement for liturgy. Yet the orientation of church buildings was considered so important that people were willing to live with unusual siting in order to get it. The result sometimes produces churches like Saint Agnes Outside the Walls in Rome, where the front door is not located on the main road (the Via Nomentana) but rather near the apse. To gain access from this side, a small portico just to the north of the apse leads to the side aisle mezzanine, the ancient matroneum . This was a difficult architectural problem. On the other hand, it is just this sort of problem which sets the stage for an original and memorable solution. 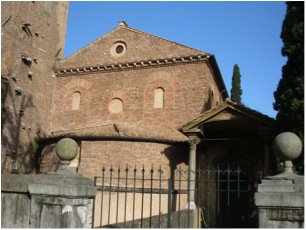 A contemporary view from the Via Nomentana.

After the Middle Ages, Christians gradually stopped insisting on orientated churches. Nevertheless, we continue to refer to the sanctuary as “liturgical east” whether it is truly east or not. Of course, the orientation of our church buildings is wrapped up in liturgical questions which are beyond the scope of the architect, to be sure. But so far as this profession is concerned, a recovery of the practice would be most welcome. For a church which prays toward the east is architecturally, if not necessarily spiritually, richer for it.

Dino Marcantonio is an architect practicing in New York City, a co-founder of the Catholic Artists Society , and a board member of the Society for Catholic Liturgy . He has taught at the Yale School of Architecture and the University of Notre Dame. His Twitter account is @DinoMarcantonio .