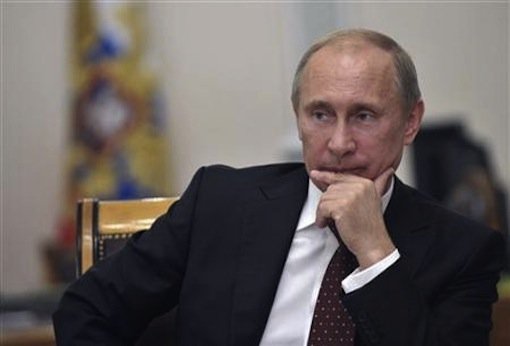 You may have read that Russian president Vladimir Putin recently signed a new law banning the adoption of Russian children by Americans. Andrea Roberts read the news with “disbelief” and was sure this meant certain death for the dozens of Russian orphans with special needs for whom she helps to find American homes each year. Reece’s Rainbow, the Gaithersburg, Maryland-based organization that Roberts founded and directs, has in the last four years aided in the adoption of over two hundred Russian children with Down syndrome and other special needs.

While the new law presents a grim scenario for Reece’s Rainbow, a little-noticed development seems set to become a huge New Year’s gift for Roberts and the families she works with. Robert Shlegel, a member of Putin’s United Russia party and a deputy in the lower house of the Russian Parliament, has proposed an amendment to the law that will allow an exception for Russian orphans with special needs.

“The last few weeks have been an emotional roller coaster for us,” says Roberts. “The law that Putin signed would literally be a death sentence for hundreds, if not thousands, of Russian orphans with special needs. This amendment has restored my faith that the Russians believe that every person deserves a family.”

Many of the Russian children now living in the U.S. and Canada thanks to Reece’s Rainbow were plucked from Dickensian orphanages where they suffered malnourishment and neglect. For such children, adoption offers possibly the only escape from a life that is nasty, brutish, and short. According to Roberts, Russian children with special needs who are lucky (or tough) enough to survive the horrors of the orphanage are sent at age four to an adult mental institution, where most will die before they turn ten.

“Whenever I introduce someone to the work of Reece’s Rainbow, they can’t fathom the way these kids are living,” Roberts says. “We have seen ten- and twelve-year-olds that weigh ten pounds.”

Children with Down syndrome often have specific health needs that are best dealt with in the early years of life and, in certain cases, newborns must go straight from the delivery room to the operating table. Heart defects, which affect 50 percent of children with Down syndrome, are handled very successfully in the United States. Left untreated, such defects can be fatal by late childhood. Even minor health and living needs, such as feeding challenges or frequent ear infections, can turn fatal if ignored.

My daughter Magdalena, who is six and has Down syndrome, lives a healthy life in her Connecticut home. But she aspirates thin liquids. This means that she cannot drink anything with a consistency thinner than honey. Water, juice, or milk must contain a thickening agent or she will draw it into her lungs, causing infection. It’s not hard for us to deal with this. We have incorporated the thickening of her drinks into our routine. But this issue, however minor for us, would likely prove fatal for her if she were in an adult care facility in Russia. If Magdalena were left untended, fed a diet of typical institutional fare without any accommodations, she would aspirate daily, contract pneumonia several times over, and likely die within a few years.

All of this underscores Roberts’s wholly believable claim that the unamended Russian law is a death sentence for the one thousand kids with Down syndrome who Reece’s Rainbow estimates are currently languishing in Russian orphanages.

According to UNICEF, there are 740,000 orphaned children in Russia . About 60,000 Russian children have been adopted by American families in the last twenty years. The U.S. State Department lists China and Ethiopia as the most popular overall sources for American adoptions, but China’s one-child policy and the frequency of post-natal murder of children in Africa has contributed to Russia’s status as the leading destination for Americans looking to adopt a child with special needs.

Critics of international adoption have suggested that white, prosperous American families prefer to adopt from Eastern or Central European countries simply because the children they adopt will look like them. Others have argued that there are plenty of American children in foster care who need homes and that the international adoption process is fraught with fraud and massive financial surprises.

But some families specifically want to adopt a child with Down syndrome or other special needs. Such families may already have discovered the blessings of parenting these children, and, more practically, are experts on navigating the often-intimidating world of disability services, medicine, and education. But, thanks to sky-high rates of abortion following a prenatal diagnosis of Down syndrome, there are almost no children with Down syndrome to adopt in the United States.

The survival rate of children with special needs in Russia is higher than in other countries, says Roberts, the United States included. Prenatal technology, or the lack of it, plays a role.

“There are more live births of children with Down syndrome in Russia than there are, say, in China or the United States because of the lack of prenatal care. When a poor woman in a Russian village gives birth to a baby with Down syndrome or some other apparent defect she will simply dump [the baby] in the orphanage,” she says.

UNICEF, Roberts claims, is a big part of the problem. The U.N. program’s support for the Hague Convention on Inter-Country Adoption, which aims to combat child trafficking, has been interpreted by many as an effort to end international adoptions altogether. In a 2010 article for the peer-reviewed journal Global Policy , Harvard Law School professor Elizabeth Bartholet leveled the charge: “UNICEF focuses on adoption abuses, and argues for regulatory ‘reform’ to ensure against baby buying and fraud, and provide preferences for in-country placement. However UNICEF actions and policies reveal that it sees almost no legitimate role for international adoption.”

“They lump everyone together,” she says. “They offer ‘funding’”if you want to use that word”to these countries to use for promotion of domestic adoption and foster care. They pay these countries to do the kind of thing that Putin is doing.”

In a statement on the Russian adoption ban, UNICEF executive director Anthony Lake said, “We ask that the government of Russia, in its design and development of all efforts to protect children, let the best interests of children”and only their best interests”determine its actions.”

“It’s not just my opinion. It’s true, and it’s ugly,” she said. “What I want to say to UNICEF”and to Vladimir Putin”is just don’t stand in the way. Everyone deserves a family.”

If Shlegel’s amendment succeeds, dozens of Russian orphans with special needs will hopefully find the loving family they deserve.

Matthew Hennessey is a writer and editor who lives in New Canaan, Connecticut. You can follow him on Twitter @MattHennessey.