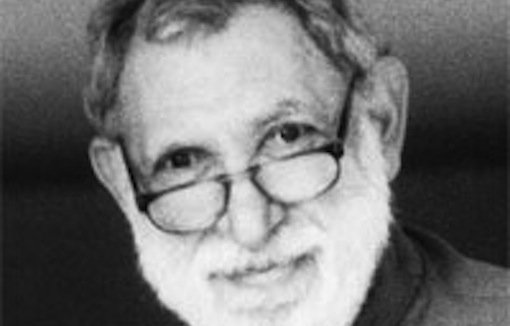 American poet and critic John Hollander died this weekend . He was 83. Beginning with A Crackling of Thorns , which won the Yale Younger Poets Series in 1958, Hollander published over twenty volumes of verse and several works of criticism and anthology. He was both an original and a man of his time, which is perhaps true not just of all writers but of all people. Yet it is nevertheless particularly true of him.

Born in 1929 to a “somewhat observant” Jewish family, he entered Columbia University in the late 1940s, where he studied under Allen Ginsberg. While Hollander was, as he notes in an interview with J.D. McClatchy, indebted to Ginsberg, his work would differ from that of many of Ginsberg’s contemporaries (and Ginsberg’s own), eschewing the confessionalism of Robert Lowell, the fragmented syntax of John Ashbery, and the primitivism of Charles Olson. Instead of writing in free verse (which he said he found too constraining), he used traditional forms, often speaking in the voice of this or that character, re-working Biblical and classical myths. His poems celebrate beauty and nobility (however imperfect), even if, as he remarks dryly in Powers of Thirteen (1984), “This is neither the time nor the place for singing of / Great persons, wide places, noble things”high times, in short.”

Hollander looked to the past in part because he believed there was nothing new”only the rephrasings and recreations of a reality that both encompasses and eludes language. The past is part of the present, and remembering the past’s words, the past’s sounds, helps us to see something of who we are and what there is. In “By Heart” (2003), for example, he writes:

We play by ear but learn the words by heart
(Visions we have by head); yet even when
The sight of the remembered page has dimmed
The jingles that we gleaned from it remain
Lodged with us, useful, sometimes, for the work
Of getting a grip on certain fragile things.
We are ourselves from birth committed to
Memory, to broad access to a past
Framing and filling any presentness
Of self that we could really call our own.
We grasp the world by ear, by heart, by head,
And keep it in a soft continuingness
That we first learned to get by soul, or something.

And in “Picture Window” (2003), he describe a man who, admiring his own image in a window, misses “the world / As it yielded up alms in one of its / All too infrequent moments of beauty.”

While his earlier poems show his well-known Audenesque wit (“When Adam found his rib was gone,” he writes in “The Lady’s-Maid’s Song” (1958), “He cursed and sighed and cried and swore / And looked with cold resentment on / The creature God had used it for”), his later work is often filled with the enchanting incantations of the soul. In “Kinneret” (1988), for example, he writes, “Musing at sundown, I recall the long / Voyages across the shoreless seas of sand / Shuddering at dawn, I call out for your song,” and in The Work of Poetry (1997), he provides a touching remembrance of how the language of the Psalms in the original Hebrew and in various translations instilled in him a sense of the mystery of the human soul.

Yet, while his work is preoccupied with identity and reality, poetry for Hollander can never fully “grasp” either the self or the world “outside” the self. In this respect, he has followed Stevens, suggesting that the point of poetry (as opposed to science) is to contemplate the meaning of the world even if the meaning “propounded” (to borrow Stevens’s terminology) is always fictitious because of its temporal or partial expression.

Again, in the interview with J.D. McClatchy for The Paris Review , Hollander said that “literature gets to be about life genuinely by taking very great regard of how much it is about itself. Its business is, in Stevens’s phrase, ‘plainly to propound’ fictions, the way one propounds parables, and to go on interpreting. That is its higher moralism.” And in response to Auden’s famous phrase that “Poetry makes nothing happen,” Hollander writes in 1997 that “the ‘nothing’ that poetry makes happen ”causes to have occurred in the world”is the something of fictions, the stories that adhere to things and places and people in the way lasting names do, utterly changing something of their palpable natures.”

This does not mean that all fictions are the same for Hollander. “The steady work of much human seriousness,” he writes, “in art, philosophy, and science”is made more interesting because of the mobs of false messiahs always presenting themselves at the gates.” What makes it even more interesting, we might add, is if Stevens’s proposal is itself a false messiah”a kind of salvation from the “cult” of “ideologies.”

A more complete stock of Hollander’s work will, I am sure, follow in the coming days, but at the very least it is a partial reminder of the mystery of the human soul and the complexity of God’s created order and of the great richness of post-WWII American poetry”a period that not only has given us Lorine Niedecker’s delicate stitchings, Denise Levertov’s haunted lines, and Frank O’Hara’s quick “I do this I do that” poems, but also Hollander’s deep, sonorous evocations.

Micah Mattix is an assistant professor of literature at Houston Baptist University and the editor of Prufrock , a daily newsletter of books, art and ideas.