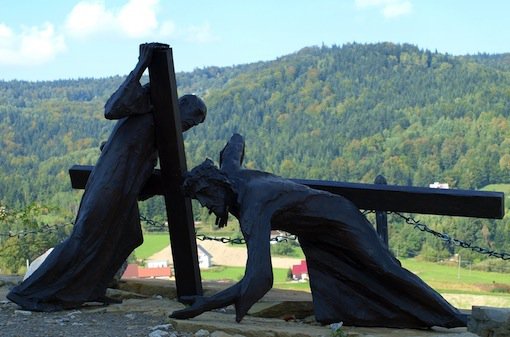 Cracow, Poland”The village of Pasierbiec is in the south of Poland, about thirty miles from the old royal capital of Cracow. Its church, the Basilica of Our Lady of Consolation, is full of votum gifts testifying to favors received through the intercession of the basilica’s namesake. (The church itself reminds me of a comment Pope John Paul II’s secretary, now-Cardinal Stanislaw Dziwisz, once made when we were looking at a photo album of new churches in Nowa Huta, the mill-town built by Polish communists outside Cracow: “ Troppo [Too much] Corbusier . . . .”)

Outside the church, the priests and people of Pasierbiec have done something quite remarkable, however: they’ve recently constructed a stunning, contemporary Via Crucis , in which figures from modern Polish Catholic history are “inserted” into the traditional Stations of the Cross. The bronzes themselves are well-done, but what is particularly striking about the Pasierbiec Via Crucis is the idea that animates these sculptures”the idea that we can, and should, imagine ourselves living inside the biblical story. Or, if you prefer, the Pasierbiec Via Crucis is a powerful invitation to look at the world around us, including recent history, through lenses ground by biblical faith.

Some examples of this optic at work at Pasierbiec:

In the depiction of the fifth station, it is Blessed John Paul II, not Simon of Cyrene, who helps Jesus carry the cross.

At the sixth station, Blessed Jerzy Popieluszko, the martyr-priest of Solidarity, relieves Jesus of some of the weight of the Cross while Veronica wipes the Holy Face; the message Father Jerzy preached during martial law in Poland”“Overcome evil with good””is inscribed on the Cross.

At the seventh station, the second fall, the Lord is supported by Father Franciszek Blachnicki, founder of the Oasis youth movement in which tens of thousands of young Poles were catechized during holiday camping trips.

At the eighth station, where Jesus traditionally meets the women of Jerusalem, he now meets Stanislawa Leszczynska and Stefania Lacka, prisoners who rescued children born in the Auschwitz concentration camp.

At the ninth station, the third fall, the priest comforting the Lord is Blessed Roman Sitki , rector of the local seminary in Tarnow and a concentration camp prisoner (like several thousand Polish priests).

At the 10th station, Cardinal Stefan Wyszynski, primate of Poland during the first 33 years of communist rule, holds the clothes being stripped from Jesus”an image that evokes memories of the cardinal being stripped of his freedom and his dignity during three years of house arrest.

Viewed close-up, the soldiers nailing Jesus to the Cross are obviously Roman; from a distance, their helmets are eerily reminiscent of the familiar SS helmets of World War II.

And at the 14th station, two contemporary Polish martyrs witness the entombment of the Crucified One: Father Jan Czuba, martyred in the Congo, and Father Zbigniew Strza?kowski, martyred in Peru.

The dedication of this shrine, which reflects a thoroughly contemporary biblical faith, was led by the archbishop of Cologne, Cardinal Joachim Meisner, who once told me that German martyrs, not German theologians, would be the foundation on which Christianity in 21st-century Germany would be rebuilt after the horrors of the 20th century. Meisner’s presence at the dedication was a powerful sign of the German-Polish reconciliation sought by Wyszynski and Karol Wojtyla, the future John Paul II, at the end of the Second Vatican Council; it also bore embodied the German prelate’s conviction that Tertullian’s second-century insight remains true, 18 centuries later: sanguis martyrum semen christianorum [the blood of martyrs is the seed of the Church].

The post-modern world is a wilderness of mirrors in which nothing is stable: even maleness and femaleness, two “givens” throughout recorded human history, are now regarded as “cultural constructs” to be altered at will. Reason alone seems unable to offer a powerful antidote to a post-mod culture of unreality. To see the world around us from “inside” the biblical story of the human condition can be a reality-check. It’s one our culture and society badly need these days.