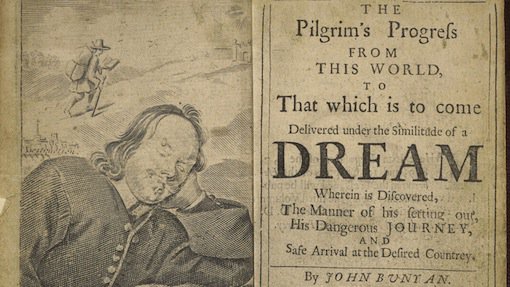 In the summer of 2006, I was luxuriating in the sunlit plazas of a city in Southern France, drinking in Mediterranean languor and la belle langue . Montpellier was seductive in its invitation to lie back and let the culture wash over its visiting students”an image, perhaps of modern day Vanity Fair. As it happens, however, I was also toting a copy of The Pilgrim’s Progress , with its insistence on the need to get up and go on more urgent business.

I was reading Bunyan because the college I attended back in New York City had imposed it as a burden that all of us students had to carry up the Hill of Difficulty. There would be a test, and indeed, the Hill would prove too steep for some. After a summer of supposed climbing, a surprising number of students still couldn’t identify Mr. Worldly Wiseman.

I’ve been thinking back to that experience because I have recently been looking at the summer assignments that many American colleges give their new students. Compared to some of today’s assignments, Bunyan’s simple allegory is almost the Himalayas of literature.

In assigning books, many colleges gravitate toward the “contemporary” rather than the classic and the challenging. This is understandable: Colleges prefer literary floaties to freighted classics because most of their students haven’t ever encountered a hard book. The students don’t yet know how to swim in the cross-currents of literature, so they are assigned books such as Moby Duck , an entertaining account of bath toys lost at sea that have washed up in random places.

When I came to The Pilgrim’s Progress , I wasn’t completely a stranger to it. I hadn’t read the book but I’d seen an animated stills movie, Dangerous Journey . Each still is an illustration from the 1985 book of the same title . Zooming in on the page, the movie dramatized the suspenseful moments”the Slough of Despond, the battle with Apollyon, the Valley of the Shadow of Death”as well as the journey’s end when Christian and Hopeful finally enter the Celestial City. The British narrator, who pronounced the hero’s name with three syllables (Christ-ee-an), kept the pace moving with his brilliant voices, giving a slimy nasal whine to a denizen of Vanity Fair (“Why aren’t you buying our goods? Buy! Buy!”) and a stout reassuring baritone to the gatekeeper of the Palace Beautiful. Brass theme music repeated every fifteen minutes throughout the 135-minute film. At lunch recently, my brother and I remembered every note.

We shouldn’t underestimate the value of giving children child-sized versions of important books. Not that it is impossible to come to a challenging text young. Louisa May Alcott had the March sisters reading The Pilgrim’s Progress at a precocious age. But some of us need a stepladder.

When I was assigned the book in college, I was glad to revisit a well-loved tale from my childhood and be able to say that yes, I had read the book, not just seen the movie. The movie, however, primed me for the ascent. There were other literary appetizers. An abridged version of the Iliad I read in the fifth grade inspired my one-time attempt at rapping: “War broke out between Greece and Troy”for Troy there was grief but for Greece there was joy.” (Move over George Chapman, Richmond Lattimore, and Robert Fagles.) The mid-nineties PBS television show Wishbone , starring a Jack Russell terrier, introduced me, avant la lettre , to Pride and Prejudice , Frankenstein , and The Count of Monte Cristo . Sorry to say there are some classics, including Cyrano de Bergerac and Poe’s “The Purloined Letter,” that I know to this day only as Wishbone episodes.

A baby book publisher has caught on to this concept. Jane Eyre: A BabyLit Counting Primer (by Little Miss Brontë), counts from “one governess” to “ten books””and quotes Jane here and there, i.e. “It is always dangerous to keep a candle lit at night.” Moby Dick , Wuthering Heights , and Anna Karenina also come in square board books by BabyLit. How Wuthering Heights is made appropriate for babies I don’t know. An alphabet book perhaps? “A is for Anger, B is for Betrayal, C is for Corpse . . . .”

Comic-book versions of many classics were published as a series by Classics Illustrated from 1941 to 1971. They are now available for purchase in iBooks . Great Illustrated Classics publishes abridged versions for children of otherwise adult books such as The House of the Seven Gables and Robinson Crusoe . So do many major publishing companies, including Random House with Stepping Stone Classics ; Oxford University Press with Children’s Classics ; and Barnes & Noble with Classic Starts . At the right time of course, children can begin reading, or have read to them, the unabridged versions. In the meantime, BabyLit and the like can provide young ones a sense of the words, the symbols, and the stories that have built the literary heritage that they may one day inherit in more of its fullness.

When the time comes to finally open the original , there is pleasure in reading something you know a little already. Whenever I begin a book of which I have only seen the movie (or the Wishbone episode), I start out with a burst of ego. With The Pilgrim’s Progress , familiarity with the story gave me a satisfying sense of head start over my classmates. Pride is then followed by surprise at what I didn’t already know, and the enlightenment of discovering new elements the adaptation left out. I didn’t remember any long theological conversations in Dangerous Journey , and I had no idea the unabridged Iliad was so carnal and grisly. The movie Little Women contained nothing about the March sisters’ love of The Pilgrim’s Progress , a major theme in Alcott’s story. In reading I discovered that Mr. Darcy’s house (“neither formal nor falsely adorned”) epitomized its owner, that Frankenstein ’s narrator was spineless, and that Edmond Dantes’ obsession with revenge was unbecoming. Wishbone couldn’t tell me any of that.

Colleges and universities today tend not to assign classics in any form as summer readings. Of the 309 colleges and universities that made beach-book-style assignments last year, only four assigned anything that could be considered a classic ( Frankenstein really does appear to be immortal). Perhaps if more students had early glimpses of better books, colleges would be a little bolder in what they beach.

In the weeks before my college’s big test on The Pilgrim’s Progress , an enterprising student created a study guide with notes, mnemonic devices, and illustrations, and began to circulate it among my classmates. It proved helpful for those who had skipped or skimmed the reading; it served as their version of my animated stills movie. As for me, I was ready to learn the book from the book itself.

The study guide was creative, but there are no real shortcuts on the road to the Celestial City. Hawthorne noted as much in his short riff on Bunyan, “ The Celestial Railroad ,” a modern conveyance that promises to bypass the unpleasant parts of the journey, but”woe to the ticket-holders”takes them straight to perdition. I don’t think our contemporary regime of lite reading for college students is a one-way ticket to Gehenna, but colleges could do better and parents could help them by including some little lit among the bedtime stories.

Ashley Thorne is director of the Center for the Study of the Curriculum at the National Association of Scholars.