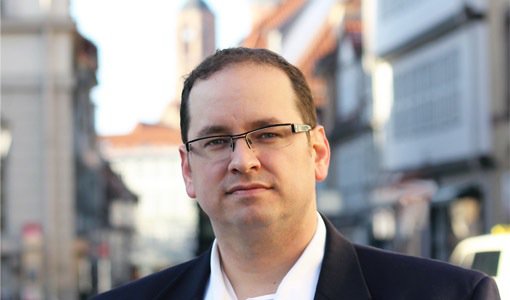 Timothy Michael Law is a scholar interested in history, theology, and religion. Last month Oxford University Press published his book on the Septuagint, When God Spoke Greek: The Septuagint and the Making of the Christian Bible . I recently got the chance to talk with Law about his new book and the importance of the ancient Greek translation of the Old Testament to contemporary churches.

Where did your interest in the Septuagint begin?

One night in 2002, I was sitting with one of my best friends from college and seminary, Kyle McDaniel, and he threw (literally!) a big blue book at me from across the room. The book was Alfred Rahlfs’ handbook edition of the Greek Septuagint . We started talking about it, and both of us were uncertain whether we wanted to pursue more Hebrew or Greek, or more early Judaism or early Christianity in our graduate work. We loved all of it. We decided that one way to marry those interests was to study the Septuagint.

Why should today’s churches care about the Septuagint?

There are several reasons I think modern Christians should care about the Septuagint.

First, when a modern reader sees Paul quoting Isaiah, and then turns to Isaiah in an English translation, she notices the citation is different. Why? The Old Testament translation of almost every modern English version of the Bible is based on the Hebrew Bible, but the New Testament authors and the early Church most often used the Septuagint. Augustine and others throughout history even argued that if the New Testament authors used the Septuagint, the Church ought to affirm its authority as well. I unpack this in several chapters in the book.

An alternative , sometimes older , form of the Hebrew text often lies behind the Greek. When the Reformers and their predecessors talked about returning to the original Hebrew ( ad fontes! ), and when modern Christians talk about studying the Hebrew because it is the “original text,” they are making several mistaken assumptions. The Hebrew Bible we now use is often not the oldest form of the Hebrew text, and sometimes the Septuagint provides the only access we have to that older form.

First, we must be careful even calling the Septuagint “the Bible,” since we don’t have record of a complete Old Testament until several centuries into the Christian era. Before then, Christians used individual parts of what later became the Old Testament”for example, the Pentateuch or Psalms or other individual books. By the fourth century, we have evidence of complete Bibles, and these include the New Testament; more importantly, the Old Testament portions included the books that are now called “Apocrypha.”

With that caveat in mind, there was no one singular moment when the Western Church decided to abandon its first “Bible.” (The Greek Orthodox Church still uses it, and some churches of other Eastern Orthodox varieties use translations that were made from the Greek.) The process was gradual and lasted several centuries, but it did have a catalyst in the work of one of the greatest intellectuals of Western antiquity.

Jerome decided to translate the Hebrew Bible into Latin, and he would have as momentous an impact on the history of the Bible as the Reformers would in the sixteenth century. At the end of the fourth century, the Latin Bible used in the West was what is now called the “Old Latin” version. (It is called the “Old Latin” only because it was the version used before Jerome made a new one.) The Old Latin was translated from the Septuagint, which meant that even in the churches where Greek had given way to Latin, Christians were still in contact with the Septuagint via translation.

Jerome became dissatisfied with the Old Latin translations, which he considered inaccurate and, worse still, lacking unity in the manuscript tradition. Every time he picked up an Old Latin manuscript, it was different from the one he had just read. He was also in regular contact with Jewish interlocutors, and he seems to exhibit some embarrassment that the Church was using a different Bible.

Jerome emerges partly as a weak man buckling under pressure from his social environs, and partly as a man hell-bent on creating an indomitable legacy for himself. He wanted to do something radical, so he went right to the Bible, threw out tradition, and created a new Latin translation from the Hebrew.

The Protestant Reformation in the sixteenth century put the final nails in the Septuagint’s coffin for the West. They followed Jerome’s logic, believing that the medieval text of the Hebrew Bible was indeed the most original text of Scripture. There were some exceptions”Zwingli, for example, had argued that the Septuagint version of Isaiah was superior to the Hebrew”but for the most part Jerome and the Reformers can be credited with burying the Septuagint in the West.

That’s very interesting about Zwingli. What’s the most fascinating thing you discovered during your research?

Unfortunately, it isn’t in the book! The most interesting area to me was the period from Jerome to the early modern age. My book ends with Jerome, since he was the beginning of the end of the Septuagint in the West, and the book was already long enough for its aims. But the events related to the Septuagint in the next 1500 years were really surprising. We also understand the Reformation better by examining the rise of what is now known as Christian Hebraism. Another book is waiting to be written.

In book eighteen of City of God , Augustine tries to make sense of a discrepancy between the Greek text and the Hebrew text of Jonah. In the Hebrew text, the prophet says that Nineveh will be overthrown in forty days, but in the Septuagint he says that the city will be overthrown in three days. Augustine warns his reader “not to belittle the authority of either version.” He explains that both are correct because both numbers bear witness to Christ. Christ spent three days in the tomb between his death and resurrection, and Christ spent forty days with his disciples between his resurrection and ascension. I’d like your reaction to his approach at harmonizing.

This is a great example of the tradition of biblical exegesis often practiced in the Church, and this runs right up to the modern period. Modern Christian interpreters on the more conservative end of the spectrum can forget just how influenced they have been by the rise of historical-critical scholarship. Both pursue the study of Scripture in a very scientific way. When we read early and medieval Christian exegesis, we realize we have entered into a different world.

I devote a chapter to Augustine’s debate with Jerome over the authority of the Septuagint. Those who retell this story often stick to the details they find in the correspondence between the two, but they don’t ask how these scholars were influenced by their own socio-religious contexts. I do this in detail in the book, but I can offer some brief comments here.

In Palestine, Jerome was in regular contact with Jewish teachers, had learned rabbinic methods of interpretation, had been exposed to the incredible variety in the Latin manuscript tradition, and had participated in the Jewish-Christian polemic over the biblical text. There was an external pressure constantly pushing him towards the Hebrew. Jerome’s ambition to fashion the Christian Old Testament after the Scriptures of the synagogue must be seen in this light.

Augustine, on the other hand, was in North Africa, far away from those same concerns. While there were certainly Jews in North Africa, the social setting was entirely different for Augustine, and so he lacked pressure to conform to the Hebrew text. He could continue using the Old Latin derived from the Septuagint with no real challenge. And in his mind, why go against the New Testament authors and the established tradition of the Church?

So, what’s your opinion? Where’s the real Scripture?

As I demonstrate in the book, the formation of the Old Testament was a complex process, so we cannot conclude with any seriousness that we have an “original text.” For many centuries we thought that our best access to the “original text” of the Old Testament was found in medieval Hebrew manuscripts. We now know through the discoveries of the Dead Sea Scrolls, and from a renewed interest in the Septuagint, that we have witnesses to the “original text,” but we will never have access to it. This is why rather than throwing off either the Septuagint or the Hebrew Bible, it might be more theologically fulfilling to welcome them both as Scripture.

I like the idea of tempering the historical-grammatical method with a more Augustinian approach. What other challenges would you like to see Septuagint scholarship take up?

There are two in my mind. One of the most under-examined areas is in the early Church’s use of the Septuagint, specifically pursuing this question: What difference did it make that the Church constructed its earliest theological expressions on the basis of the Greek Septuagint instead of the Hebrew Scriptures? There is a translation and commentary of the Septuagint in French, the series La Bible d’Alexandrie . It is the most valuable tool for exploring this question, but the editors in the series could only scratch the surface. Countless dissertations and monographs could be written on one Church Father’s use of the Septuagint; on a certain theological theme that was based on a reading in the Septuagint and then expressed by multiple authors; on discussions you find sometimes in Origen over differences between the Hebrew and Greek; on what impact these discrepancies had on exegesis; and the list goes on.

Give some specific examples on how you think churches could incorporate your book’s ideas?

I don’t want anyone reading this interview to think I’m calling for a complete upheaval in the Christian Church. I’m not as bold as Jerome! But I would like to see pastors, priests, and others who teach Scripture and theology to consider incorporating into their sermons and lessons more readings and explorations in the Septuagint. Even if one doesn’t want to attribute any spiritual authority to the Septuagint, one can at least appreciate how this ancient Greek translation offers many interpretations that may help illuminate the meaning of the passage. For starters, one could use the New English Translation of the Septuagint . A more elegant translation is Nicholas King’s The Old Testament , but it ships only from the United Kingdom.

Thanks for the fascinating discussion, and congratulations on the new book.

Timothy Michael Law is Publisher and Editor-in-Chief of The Marginalia Review of Books . He is the author of When God Spoke Greek: The Septuagint and the Making of the Christian Bible and tweets @TMichaelLaw . Collin Garbarino is assistant professor of history at Houston Baptist University.