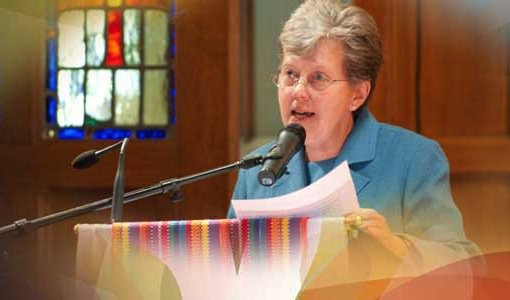 Last month, Pope Francis , upon returning to Rome from World Youth Day in Brazil, spoke of the Church’s need to develop “a profound theology of womanhood.” A few weeks ago the Leadership Conference of Women Religious (LCWR) met in Orlando, Florida for their annual assembly, and in their conference exercises, one can only be disappointed with their response to the Pope’s call.

The conference was marked by a confused ecclesiology and an unsettling misunderstanding of individual conscience and the conscience safeguarded by the Church.

If the Church is to seek a more profound theology of womanhood, a foundational step to take is to have a coherent and consistent ecclesiology. Sister Florence Deacon, OSF, describes her view of the Church:

Lumen Gensium ’s [sic] chapter devoted to the laity divided the faithful into three groups when it defined laity as “all the faithful except those in holy orders and those in the state of religious life specially approved by the Church.” It went on to note that by baptism they are part of the people of God and “in their own way made sharers in the priestly, prophetical, and kingly functions of Christ; and they carry out for their own part the mission of the whole Christian people in the Church and in the world” ( Lumen Gentium [LG] 31).

In the chapter on “Religious” the council fathers described a third way women religious are situated in the church. When one looks at the “divine and hierarchical structure of the Church,” it cautions that religious are not in a distinct group midway between clerical and laity (LG 43). Instead, the faithful are called from these two groups to consecrated life.

I visualized this description of religious life with the church as a small circle for the ministerial priesthood, next to a much larger circle of the lay state. A third circle overlaps the first two to indicate that consecrated religious belong to one of these two states.

While at the time I was not aware of these inconsistencies, I am not alone in thinking that this role confusion has contributed to the tension sometimes experienced among women religious, laity and hierarchy.

There is nothing unsatisfying about the council documents’ description of the laity, religious, and clergy, especially when the documents indeed reiterated the importance of a lay participation in the Church. Yet Sister Florence insists that there are “inconsistencies” in the Church’s explication on the role of women, especially women religious, and such inconsistencies are what ultimately drive Sister Florence and the LCWR in their search for “equality” in the Church.

Perhaps Sister Florence does not mean to say “inconsistencies,” but “imbalance,” that the influence of women religious is disproportionate to their exalted state. There still exists inequality and oppression in the Church regarding women religious, propounded by the use of gender-specific language:

I have a very clear memory of the first time I heard a sister point out how our language marginalized and excluded women. When a priest said, “Pray, brothers,” I knew they meant me as well. But later I began to realize that when the terms “men” or “brothers” were used generically, people did tend to think of males first and often exclusively, and that women’s invisibility was reflected in wider societal institutions.

If I asked students, “Who do you consider to be the most influential men of the last century?” They never named any women. When I explained that if the term “men” really included females as well they wouldn’t have limited their thinking to males, there was usually silence in the room. They, too, began to see that our use of language in which men were the measure, taken as the norm, and women were often excluded, was symbolic of cultural and societal roles as well.

Sister Florence’s ecclesiology does not end there: She weaves confused ideas of private conscience and the conscience of the Church with the roles of laity, religious, and clerics to almost suggest that the truth of faith and morals is reached as a result of consensus, not because the truth is the truth:

As a result of these gifts to every rank, the faithful participate with the clergy in the discernment of faith: “The entire body of the faithful, anointed as they are by the Holy One, cannot err in matters of belief. They manifest this special property by means of the whole peoples’ supernatural discernment in matters of faith when “from the Bishops down to the last of the lay faithful” they show universal agreement in matters of faith and morals (LG 12). Rather than simply following the Pastors “like a docile flock” in the words of Pius X, the people of God were to join their pastors in reflecting on articles of faith and applying them in their lives.

. . . After pointing out the laity’s prophetic role and obligation to express their opinion for the good of the Church, the laity were admonished to “promptly accept in Christian obedience decisions of their spiritual shepherds” and the shepherds were admonished to take the “prudent advice” of the laity and give them responsibility and freedom for action.

The LCWR’s ecclesiology, far from being truly catholic and encompassing, is limited to one interpretation of the “spirit” of the Second Vatican Council. Rather than demonstrate how their specific call as women and as religious complements all other roles in the Church, they articulated an incoherent ecclesiology soaked in the rhetoric of contention.

Sandra Laguerta is a graduate of Notre Dame and a junior fellow at First Things .