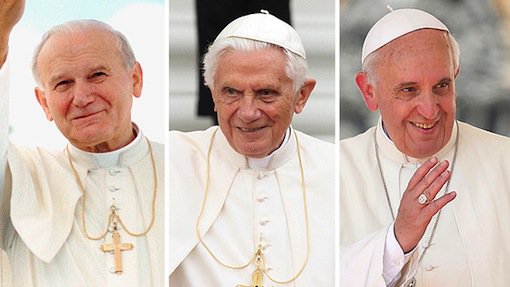 Pope Benedict IX was elected pope in 1032 when he was just a teenager: different sources put his age at somewhere between 11 to 20 years old. His father was the Count of Tusculum and used his influence to obtain the papacy for his son. Benedict IX indulged in extreme sexual immorality, including orgies and unnatural acts. The Catholic Encyclopedia calls him “a disgrace to the Chair of Peter.” Papal historian Ferdinand Gregorovius wrote regarding Benedict IX : “a demon from hell in the disguise of a priest . . . occupied the chair of Peter and profaned the sacred mysteries of religion by his insolent courses.” In an attempt to end the shame, Benedict’s godfather Fr. John Gratian offered Benedict a large sum of money to resign the papacy, and Benedict took it. He’s the only pope in history who’s known to have sold the papacy.

The sorry situation did not end there though: Fr. Gratian was elected to be his successor as Pope Gregory VI, but after it was discovered he had paid Benedict IX to resign, he too was pressured to resign, which he did. Benedict also changed his mind and decided he wanted to be pope again and twice attempted to retake the papacy.

Another story from papal history: A major dispute in the Church in the seventh century was whether Jesus had one will (monothelitism) or two wills (one human, one divine; dyothelitism). Pope Honorius I sided with monothelitism. Fortunately, forty years after his death, the ecumenical Third Council of Constantinople (approved by Pope Leo II) defined dyothelitism as dogma, and monothelitism as heresy. Pope Honorius I was listed as a heretic among those who had taught monothelitism. That’s right: an ecumenical council dogmatically defined a previous papal teaching as heresy and listed the past pope as a heretic.

A number of Catholic authors have endeavored to defend Pope Francis from criticism, particularly stemming from his recent interview . They have tried to defend him not only from misinterpretation, but also from criticisms of what he actually did say, his style, his choice of what to emphasize, etc. Their goal is admirable, and I largely agree with their sentiments, but in an effort to defend Pope Francis, Catholics must be sure to not overstate the role, powers, and privileges of the papacy.

Much of the controversy surrounding Pope Francis’ interview has been unmerited, and I believe him to be a great pope in the line of his predecessors, most of whom are at some stage in the canonization process. In an article on the announcement of the impending canonizations of Popes John XXIII and John Paul II, Fr. John McCloskey, was quoted as saying, “Speaking as a Church historian, I say with complete confidence that starting with Pope Pius XII up to our present pope we are in the greatest epoch of popes in history above all due to their Holiness.” Anthony Esolen, Professor of Renaissance English Literature and the Development of Western Civilization at Providence College, went further. “We have not had a bad man for pope since the Council of Trent.”

And that, ironically, can cause confusion about the papacy. Though even our most recent popes haven’t been perfect, it’s certainly the case that there has not been an egregiously bad pope in recent memory. That can make it easy to think that popes will always be this good, or that God protects the papacy from grave immorality or stupidity. But that’s not the case, as the examples already cited, and many others like them, demonstrate clearly.

How the Pope Can Be a Heretic

But thinking back to the example of Pope Honorius I, how could a pope be a heretic? Isn’t the pope infallible? The Third Council of Constantinople was itself approved by a pope, but how could popes contradict each other? The answer is that popes can teach with varying levels of authority, and the bishop of Rome is only teaching with the highest level of authority, infallibility, under certain conditions as defined by the First Vatican Council .

This power has only be used a small number of times in history: different theologians peg the number somewhere between two and forty times. It basically means that no matter how evil or personally heretical a particular pope might be, God will not allow him to definitively teach for the whole Church something that is wrong. Note that papal infallibility is entirely negative . When a pope teaches infallibly, he can’t be wrong in what he is teaching, but that doesn’t necessarily mean his teaching is complete, prudently worded, or prudently timed.

Although Pope Honorius I sided with heresy, he didn’t do so in a manner that met the conditions of infallibility, which meant there was no contradiction for Pope Leo II and the Third Council of Constantinople to later infallibly teach something different.

This does not mean, however, that Catholics are only obliged to follow the pope when he teaches infallibly. The Second Vatican Council taught:

Bishops, teaching in communion with the Roman Pontiff, are to be respected by all as witnesses to divine and Catholic truth. In matters of faith and morals, the bishops speak in the name of Christ and the faithful are to accept their teaching and adhere to it with a religious assent. This religious submission of mind and will must be shown in a special way to the authentic magisterium of the Roman Pontiff, even when he is not speaking ex cathedra ; that is, it must be shown in such a way that his supreme magisterium is acknowledged with reverence, the judgments made by him are sincerely adhered to, according to his manifest mind and will. His mind and will in the matter may be known either from the character of the documents, from his frequent repetition of the same doctrine, or from his manner of speaking. ( Lumen Gentium , 25)

Catholics are obliged to assent to a teaching to the degree that the pope is intending to teach it authoritatively. To apply this to a current example: it’s not at all clear, given “the character of the document,” that Pope Francis’ remarks in his recent interview were intended by him to be taken very authoritatively. They are coming from the bishop of Rome, and so shouldn’t just be dismissed, but they don’t seem to be on the same level as, say, his great encyclical Lumen Fidei .

Was the Holy Spirit at the Conclave?

But why would God allow there to ever be a bad pope? Doesn’t the Holy Spirit guide the conclave process?

First, although popes have been chosen by election since the early Church, the conclave process as it exists today is largely, if not entirely, man-made. The position of “Cardinal” in the Church was a medieval creation, and though they are often bishops, anyone could theoretically be designated as a Cardinal, including lay people and women. The rules of the voting process, the fact the Cardinals are locked away in conclave (literally cum clave , Latin for “with a key”), etc, all of it has simply developed over time for various reasons, and could theoretically be scrapped or substantially altered by a pope at any time. Popes Paul VI, John Paul II, and Benedict XVI all altered the conclave process before exiting the papacy.

Second, while God’s providence certainly extends over all of history, there’s no guarantee at all that the Holy Spirit will guide the Cardinals to a good pope or that the Cardinals will listen accurately even if the Holy Spirit is prompting them. I have no reason to doubt that the Cardinals at recent conclaves have taken their duty seriously and prayerfully, but praying before making a decision doesn’t make the resulting decision the direct working of God. Very bad people can be chosen to be pope and in fact have been chosen to be pope. The only guarantee is that whoever they choose, the pope won’t infallibly teach something that is incorrect.

The Saints Who Criticized Popes

Given the fact that the pope is not protected from being stupid, imprudent, or corrupt, and that he teaches with varying levels of authority, there can be such a thing as legitimate criticism of a pope. Any criticism would have to come from a spirit of great humility and with respect to any authority the pope exercises on a particular subject: heresy and schism are not a part of legitimate criticism. But the same Second Vatican Council which clearly stated that the faithful are to submit to the teaching authority of the bishops, as well as that “the faithful must cling to their bishop, as the Church does to Christ,” also taught, “Let [the bishop] not refuse to listen to his subjects, whom he cherishes as his true sons . . . .” ( Lumen Gentium , 29)

A poignant example of this in action is found in the life of no less than the great saint and Doctor of the Church Catherine of Siena. For nearly seventy years”a full generation”the bishops of Rome had resided in Avignon, France rather than Rome, Italy. There were people who lived and died knowing only of a pope living in France. The circumstance was quite irregular, to say the least, and was the result of the corrupt influence of the French government. Did St. Catherine go out of her way to defend the wisdom of the popes residing in France as the clear movement of the Holy Spirit? Not at all: she met with Pope Gregory XI and was instrumental in convincing him to move back to Rome.

This tradition of “calling out” popes goes all the way back to apostolic times. In his letter to the Galatians, St. Paul tells us how he forcefully confronted St. Peter when he wasn’t living out his own teachings about the openness of the Church to Gentiles:

When Cephas [Peter] came to Antioch, I opposed him to his face, because he stood condemned. For before certain men came from James, he used to eat with the Gentiles. But when they arrived, he began to draw back and separate himself from the Gentiles because he was afraid of those who belonged to the circumcision group. The other Jews joined him in his hypocrisy, so that by their hypocrisy even Barnabas was led astray. When I saw that they were not acting in line with the truth of the gospel, I said to Cephas in front of them all, “You are a Jew, yet you live like a Gentile and not like a Jew. How is it, then, that you force Gentiles to follow Jewish customs?” ( Galatians 2.11-14 )

What these examples illustrate is that there is a place for respectfully criticizing the pope. Neither St. Paul nor St. Catherine campaigned for the Church to “move past” infallible teaching. Rather, they encouraged the pope to do a better job of being pope.

Defending Pope Francis is admirable, but we must be careful to be accurate in what we are defending”or else we may be building another kind of “ house of cards ,” which, with a single bad pope, could come crashing down.

Brantly Millegan is a co-founder and editor of Second Nature and an assistant editor at Aleteia . He is studying for a MA in Theology at the St Paul Seminary School of Divinity in St Paul, MN. His personal website is brantlymillegan.com .