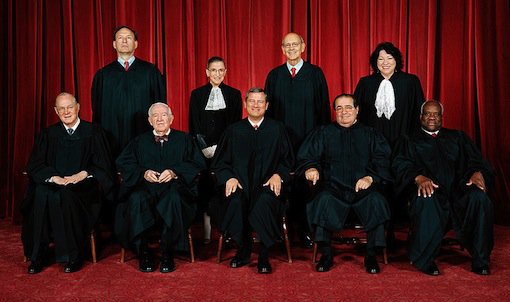 Last week the Supreme Court heard oral arguments on Schuette v. Coalition to Defend Affirmative Action. This case involves a challenge to Michigan’s Proposal 2, a 2006 ballot measure designed to put an end to affirmative action preferences in programs and policies of public institutions in the state.

I’m willing to wager that the Court (meaning Justice Kennedy) will find a way to overturn Proposal 2. Affirmative action has become a central mechanism for elite management of society, and powerful people are unwilling to live without it.

The Michigan Proposal 2 case is one of many in the last few decades, the last of which was Fisher v. University of Texas , decided by the Court last year. As Michael McConnell recently observed in our pages, Fisher continues a long tradition of very muddy legal reasoning that began Bakke in 1978. Our courts do logical and rhetorical somersaults to square race-based assessments of merit”which are the essence of affirmative action”with the plain sense of our anti-discrimination laws.

Pretzel-like reasoning is at work in the challenge to Proposal 2. One must distinguish on the basis of race”discriminate in its literal sense”in order to have an affirmative action program. According to the ACLU, Proposal 2’s ban of affirmative action based on race-based criteria is itself a form of discrimination.

The apparent illogic of the ACLU argument is not necessarily an indication that it will fail, nor that it is illogical. There are historical and cultural reasons why affirmative action seems indispensible, even today, and the law almost always bends to make room for what we can’t imagine doing without.

In the prosperity after World War II, whites for the most part engaged in competition for newly available opportunities. Needless to say, some were more equal than others, but the rapidly expanding economic pie kept ethnic tensions to a minimum and allowed for a generous, beneficent WASP dominance that made room for other whites.

Meanwhile, blacks were almost entirely excluded. Their resentment rose as the Civil Rights movement raised expectations. In the 1960s white America was shocked by a series of racial riots in many American cities. The incendiary rhetoric of Malcolm X came to seem all too realistic. In 1967 Lyndon Johnson appointed the Kerner Commission to determine the root causes of urban riots and propose solutions. The 426 page Kerner Report was a bestseller, which is not surprising. It promised to answer one of the pressing questions of the time: What is to be done?

The next ten years saw the evolution of our current system. A large anti-discrimination legal apparatus emerged that monitors race and housing, race and employment, as well as other areas of public life. At the same time a less coordinated and less well-defined system of affirmative action came into being.

Designed to prevent discrimination, the anti-discrimination machinery has not been politically controversial. By contrast, the patchwork of affirmative action and other programs to engineer social advancement for black Americans have been very controversial, and were from the beginning.

There are many reasons for this controversy. Affirmative action requires discrimination for the sake of overcoming discrimination, which can be hard to reconcile with the anti-discrimination principles. But more important has been the social reality. The 1970s was not a decade of rapid economic expansion. The pie was not getting bigger fast enough, and therefore engineering middle class opportunities for blacks entailed diminishing them for whites.

There have been better years in recent decades, but these have corresponded with the increased importance of advanced degrees for economic success. In 1960 the income differential between a high-school educated worker and someone with a four-year degree was not a great as today. Not surprisingly, therefore, the controversies over affirmative action have focused on university admissions, which most today see as the gateway to economic success.

Throughout these controversies elite white America has been solidly behind affirmative action. In 1998 William Bowen and Derek Bok, former presidents of Princeton and Harvard, published The Shape of the River , a defense of using race as a criterion for college admission. CEOs of major corporations consistently speak in favor of affirmative action (and none against it). There is no significant dissent in elite circles.

This strong elite consensus is not hard to understand. In the immediate aftermath of race riots it seemed self-evident to powerful people that they have a great deal to lose in an atmosphere of racial grievance and violence. So they applied themselves to effecting changes, not just for the sake of justice, but also for the sake of saving “the system.”

In the decades since, elite white America has supplemented its ranks with people of different races, as well as women, and now gays. However, the management mentality has not changed. Affirmative action is a technique for social engineering. It’s a way to fine-tune racial (or gender or sexual identity) politics.

Put somewhat more provocatively”and perhaps more accurately”affirmative action has become a technique for confecting a docile diversity that both eases social tensions and reinforces elite dominance. This has proven to be very useful.

These are among the reasons why it remains so popular among people in positions of power who feel themselves responsible for ensuring just outcomes, maintaining social equilibrium (which of course includes their own predominance). Given the rock solid consensus in favor of affirmative action among elites, I imagine the Court ruling against Proposal 2.

But I could be wrong.

Attitudes about race are slowly changing in America, as much because of new demographic realities brought by the latest wave of immigration, interracial and inter-ethnic marriage, and progress among black Americans.

Also, elite America has changed. It’s no longer a WASP dominated culture, but instead a diffuse one largely united by a meritocratic conceit: that those who dominate do so because of their unique talents and achievement. This conceit is precious to our present day elite because it justifies their wealth and power.

Larry Summers claims as his birthright the power to run things because he believes that he is uniquely brilliant and well trained, not because he is part of an ethnic or racial group. The meritocratic justification for elite dominance may eventually undermine the consensus in favor of affirmative action.