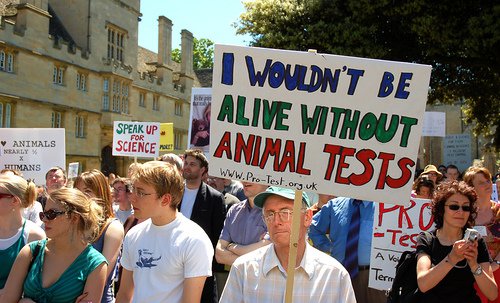 Last week, scientists in the U.K. announced a “dramatic” step forward into understanding and treating Alzheimer’s. Researchers infected mice with prion disease and then experimented with methods to ameliorate the effects. They discovered a drug compound that stopped “the disease in its tracks,” restoring normal behaviors and preventing memory loss. If the knowledge gained by using mice can be applied to humans, one scientist believes, it will “be judged in history as a turning point” in the fight against Alzheimer’s.

The news reminded me of what we might call the “grim good” of animal research, and the acute threat against it posed by the animal rights movement. Animal rights advocates”such as People for the Ethical Treatment of Animals and the Abolitionist movement led by law professor Gary Francione oppose all animal experimentation, no matter the human benefit. Indeed, because they don’t consider humans to have any greater value than animals, activists consider all animal experiments to be just as evil as intentionally infecting and studying human beings.

That message doesn’t sell well. So, to convince the public to turn against animal research, activists claim that animal experiments provide no meaningful human benefit. PETA’s website puts it this way:

Animal experiments prolong the suffering of people waiting for effective cures by misleading experimenters and squandering precious money, time, and resources that could have been spent on human-relevant research.

The frequency of such criticism may be having an impact. A 2013 Gallup poll showed that 39 percent of respondents believe that medical testing on animals is “morally wrong””up from 26 percent in 2001.

Claims such as PETA’s are half-truths that tell a lie. Yes, animal research takes time. And yes, findings in animals don’t always correlate to use in people. And it is probably true that if we experimented directly on people from the beginning, treatments and cures might be discovered more quickly.

But doing so would be a human rights atrocity. In fact, experimenting with animals before testing on people is a crucial human rights protection required by the famous Nuremberg Code.

More than that, if animal research were prohibited, scientific advances would be hopelessly stymied. Such a prohibition would stop basic research investigations into how organisms behave or function, which could never be conducted ethically in human beings.

Moreover, a prohibition would also thwart applied research —meaning experiments that look for solutions to identified problems such as the Alzheimer’s mouse experiments.

Animal testing also provides a crucial safety check that can inform scientists what won’t work, so unnecessary human experiments aren’t conducted. That was the pattern in the research that helped transform AIDS from a universally fatal disease into a chronic affliction with which patients are enabled to lead longer and healthier lives.

Here’s the story as reported in Science: Using non-animal methods, researchers designed a protease inhibitor that looked extremely promising as a treatment for HIV. Regulations required that it be safety checked in large animals before human trials”in this case, specially bred dogs”to predict how the medicine would react in a living body.

Unexpectedly, the dogs experienced serious liver damage. That was bad for the dogs, but the adverse outcome saved humans from experiencing such a fate. The failure to pass animal testing forced researchers to revise the chemical structure of the medicine, again using non-animal methods.

Further animal testing showed that the liver problem had been solved, opening the door to subsequent human trials. The rest is history. The drug, Crixivan , became generally available in 1996, allowing HIV patients to live longer and healthier lives. That wouldn’t have happened without the animal tests.

Nobody relishes animal experimentation. Indeed, for years, the research industry and the government have cooperated with an important animal welfare initiative known as “The Three Rs,”“replacement, reduction, and refinement””that aims to reduce the number used in research.

But at some point in the research trajectory, human cell lines, computer models, and the like are not sufficient to adequately test safety and efficacy. Eventually, new medical treatments and approaches have to be initially tested in living organisms. That means either using either animals or humans. The choice is that stark,and for me, an obvious one.

The next time an animal rights group claims that animal research provides no human benefit, stop and think about the astonishing medical advances made over the last fifty years. Because scientists experimented with research animals, vaccines were developed, new lifesaving medical and surgical techniques were perfected, diseases were cured—extending our lives and alleviating incalculable amounts of human suffering.