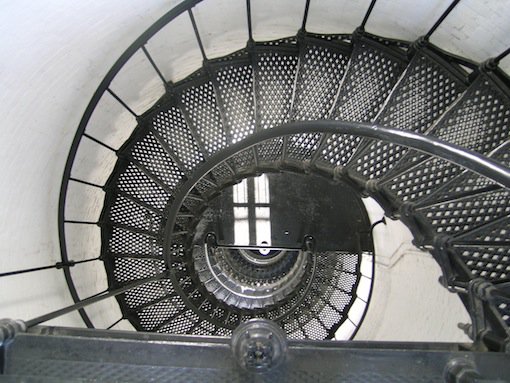 Shirley Jackson’s novel, The Haunting of Hill House , opens with what deserves to be one of the most famous first paragraphs in American literature, an unexpected meditation on sanity:

No live organism can continue for long to exist sanely under conditions of absolute reality; even larks and katydids are supposed, by some, to dream. Hill House, not sane, stood by itself against its hills, holding darkness within; it had stood for eighty years and might stand for eighty more. Within, walls continued upright, bricks met neatly, floors were firm, and doors were sensibly shut; silence lay steadily against the wood and stone of Hill House, and whatever walked there, walked alone.

Although the novel is called The Haunting of Hill House , and although it concerns a group of people who have gathered in the house to observe paranormal behavior, there are no ghosts in Hill House. Things do happen , almost as soon as people arrive. Blood oozes out of the walls. Messages appear. The house turns freezing cold in the middle of summer. And a shrill giggle follows the inhabitants through the night.

But no ghosts. Whatever haunts Hill House, it isn’t something that can be understood, looked at directly, or fought. It lives in the architecture of the place. The house may be evil and malicious, but it also has no power to harm them.

The people who enter it, however, are another matter. As things begin to deteriorate, the answer to the question, “what is haunting Hill House?” becomes, increasingly: The people inside it.

If you’ve heard of Shirley Jackson, it’s probably because of “The Lottery,” the short story on which her whole reputation rests—its own reputation resting, in turn, on its abrupt ending. It’s just as likely, however, that you’ve never heard of her, having not read “The Lottery” or her other short stories, or her six novels, or her two memoirs on raising four children in Vermont, where she lived for most of her adult life, eventually dying there in 1965 at the age of forty-eight.

Good authors fall into obscurity every day. Jackson, however, shouldn’t linger there. For sheer prose style, she was the equal of Flannery O’Connor (her contemporary). She had unbelievable range, moving from the frightening to the absurd to the touching with equal skill. Jackson also had a keen eye for human behavior—our internal behavior, the inexplicable, often disturbing way thoughts or actions might leap to the surface of a mind. Her stories focus on the ways we are a mystery to ourselves.

Like Hill House, her characters were not sane, because she considered no person sane or healthy. She dealt in loneliness, futility, and madness; not out of a morbid fascination with darkness, but because those were the facts of life as she saw them. She wrote about them, too, with a sense of their absurdity. Her stories, even when dealing with pitch-black subjects, are always funny. But the absurdity of human life is a dark thing, too.

Jackson’s characters live in places where they ought to thrive—tight-knit communities, beautiful countrysides, universities—to show how the beauty of such a place could, itself, pull out this internal darkness. Herself a kind of hermit, she wrote horror for hermits: stories where the only thing more threatening than the outside world is the evil in your own home.

Hill House is the flipside of that situation: Four people placed into an unwholesome situation turn on one another in ways predictable from their introductions. As mentioned above, the greatest danger isn’t what’s in the house: It’s what they brought with them to the house.

Each character wants to solve some personal problem. One of them wants to restore his professional reputation; another is fleeing a quarrel; a third is the black sheep of the family that owns Hill House. Only one of them is even interested in paranormal activity.

The fourth, Eleanor Vance, is the central character of Hill House and we see most of the story through her perspective. She is meek and mild, attentive to needs of others. She spent her life caring for her (abusive) invalid mother, who has recently died. To all appearances, Eleanor seems sound and stable. But she is neither, something the reader gets an inkling of when Eleanor steals her sister’s car to get to Hill House.

Nothing has ever happened to Eleanor. She has never gotten an invitation, never been in love, never been fallen in love with. She doesn’t even have a home. She has, she says, “never been wanted anywhere .” Except at Hill House.

Eleanor, desperately lonely, continually seeks the object that will transform her into a new being. She buys slacks after her mother dies; she wears bright colored clothing; she tries to design a new life for herself with a home that she does not possess, where all the objects in it confirm she is interesting and lovable. She seeks some kind of new self-definition, constantly, through objects or actions or attention. But really, Eleanor knows what she wants to be: not Eleanor anymore.

Eleanor might be right—about Hill House and about her companions. After a certain point, there is no way to tell. But for Eleanor, Hill House is the story of a woman looking for a home and a place willing to help her. For the reader, it’s the story of a house slowly eating a woman alive. For Shirley Jackson, these two ways of putting the story mean the same thing.

Hill House is haunted by the mind that built it and by the things that have happened in it. It was built by a twisted-up man and thus has a twisted-up form. He built the house, as we are told, deliberately wrong: no angle right, no floor straight. Everything is crooked and confused. No room leads straightforwardly to another. There are tricks of the house that prove deadly. Walking into the house means walking into his mind.

The paranormal events, viewed in that light, are a conversation between the house and the people in it, as difficult and incomprehensible as any conversation. We view the two characters conversing from the inside: Eleanor, presented to us with very little authorial commentary; and the house, presented to us not as a mind. The house and Eleanor can communicate to each other because, in the end, they are very alike. They want the same thing.

For Jackson, all human beings are made like Hill House: built just a little off, at all the wrong angles. They are crooked. And everything human retains that crookedness. No thought is innocent. No friendship free. No action wholly explicable, even to its actor. And no house is built right, even when built with the best of intentions.

Her characters are isolated people, often devoured whole by their private attachments. They seek salvation from their isolation, which they believe to be happiness but which is often just oblivion. They are isolated often because they are part of a tight-knit community: Jackson’s communities are defined by what they despise in common, and what a community despises can very easily shift to an erstwhile insider.

It isn’t all grim. There are happy endings. Things sometimes, for no clear reason, turn out all right after all. Not all her characters are unhappy people; for some of them, isolation is their greatest happiness and most cherished gift. And her depiction of family life is a vigorous tribute to its joys and its hardships.

But Jackson’s refusal to soften the harshness of life, even in cozy or idyllic circumstances, means that every interaction has an edge another author might have preferred to gloss over. It’s her refusal to soften these things and pretend that they can be fixed—by a better community or a nicer life or a kinder self-image—that make her an author worth returning to, again and again.

Shirley Jackson may be seeing her star rise, as Penguin has been putting much of her work back in print—including, this October, The Haunting of Hill House , released in an attractive new hardcover edition with an introduction from Guillermo del Toro.

You don’t need, however, an attractive book to appreciate Shirley Jackson. Any old paperback will do. So if you are looking for a good read for a cold winter day, you could do a whole lot worse, and maybe not much better, than picking up The Haunting of Hill House.

Articles by B. D. McClay