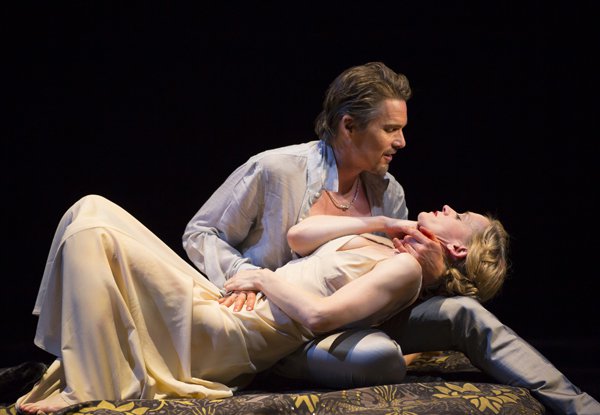 I recently saw a preview performance of Jack O’Brien’s production of Macbeth at Lincoln Center—the one starring Ethan Hawke in the title role. Here’s the short review: It’s not great. Don’t waste your money on it. But the great thing about bad Shakespeare is that it can be bad in an interesting way.

Let’s begin with the bad: Ethan Hawke, in the title role, is little more than a thuggish and uncomplicated brute. He stumbles through the play, often inebriated or high—he even smokes pot with the devil!—as the bodies pile up around him.

Suffice to say, this isn’t Shakespeare’s Macbeth. There’s no complexity, no moral conflict, and no depth brought to the role. Hawke delivers the “Is this a dagger I see before me?” speech on his knees, fumbling for the “dagger of the mind,” like a drunk man looking for his keys. He’s not conflicted—just stupid.

Yet there’s something right about making the Scottish tyrant so vulgar and unromantic. It reminds us Macbeth is ultimately a butcher, not a hero. True, in a more nuanced Macbeth , we’d see him as both: a fallen hero. But this one-note performance does help us see more clearly the nature of evil. As Simone Weil says, “Imaginary evil is romantic and varied; real evil is gloomy, monotonous, barren, boring.” Hawke’s Macbeth touches on this truth: Evil isn’t noble looking. Evil is small and petty and ugly.

But as Macbeth becomes more of a brute, Lady Macbeth is elevated to a higher moral ground than she is usually given. Lady Macbeth (played by a slinking, androgynous Anne-Marie Duff) and Macbeth are in entirely different plays—almost different centuries. She’s British, he’s American. She’s classical, highly theatrical, and very poised. He’s relaxed, modern, and sleazy. Instead of being the power couple from hell, they understand each other very poorly.

Take this line, said to Lady Macbeth right before Banquo’s murder: “O, full of scorpions is my mind, dear wife!”

Usually, Macbeth says this to indicate his guilty conscience. Ethan Hawke laughs as he says it, turning it into a kind of revolting foreplay, speaking the line as he flops down onto their bed and pulls her closer to him with one hand. He wraps his other hand around her throat. It frightens her. When she pulls away, he laughs again. This Macbeth loves his scorpions. Their poison seems to make him hungrier. It’s a stomach turning and interesting moment in what would otherwise be a flat and flashy production.

Lady Macbeth, on the other hand, is surprised by and scared of her husband’s cruelty. How is this possible? After all, she’s the one that spurs him on at first. Shouldn’t she know that this is who she married, and that this is what she’s getting? Well, yes—and so she, too, shows us something about evil—that is, the follies of romanticizing evil, how seductive it can be.

This Lady Macbeth was in love with imaginary evil. She may have even fancied herself beyond good and evil, even though she has to invoke the devil to get things done. She mistakes bloodthirstiness and strength for greatness of soul by marrying a great warrior who she thinks will be a great king. She is willing to do whatever it takes to get him there. But once she relieves him from the bonds of morality, he becomes insatiable, a monster dangerous even to her.

Lady Macbeth is repelled and frightened when Macbeth reveals himself for what he is. It is not clear that this Macbeth loves her at all. By the end of the play, her madness is mere inconvenience to him, occurring, it seems, while he’s off philandering with nubile witches. When she dies, he barely flinches. She’s an afterthought. Their story is sad, but not tragic, and certainly not a love story.

But Lady Macbeth’s mistake is an easy one to make: It’s the mistake made by every sympathetic member of the audience for Macbeth . We, too, are sucked in by its power, to find high tragedy in what otherwise must also be recognized as monsters behaving monstrously. Yet the wisdom of monsters can be seductive, can seem more profound than it really is. How often is Macbeth’s line—that life is “a tale / Told by an idiot, full of sound and fury, / Signifying nothing”—repeated as if it were Shakespeare’s deep and penetrating wisdom of life? It isn’t. It’s the pitiful cry of a man who realizes he’s been hollowed out by his own vices.

That said, it’s still a bad production, even if it’s bad in an enlightening way. There’s no way to view Macbeth as pure brute without ignoring large parts of the play. His claim that life signifies “nothing” comes only after he has “supp’d full with horrors,” and ruined any chance of having what he says he really wants:

As honour, love, obedience, troops of friends,
I must not look to have; but, in their stead,
Curses, not loud but deep . . . breath,
Which the poor heart would fain deny, and dare not.

He says that his own heart, if it could, would stop beating and kill him. But it dares not: It is too afraid of him to stop. His body fears and hates him. He loathes his life, but fears Hell too much to let it go. Those are not the words of a man who has no conscience.

Diminishing Macbeth’s complexity weakens the entire play. Macbeth is a great man who ruins himself with wickedness, but in this production he’s merely a bad guy who stays a bad guy until he dies like a dog. This production suffers from the ease with which Macbeth shrugs off his humanity. But by the time Macduff strangles the life out of him, you’re ready to see him go. And maybe that’s a good thing.

Kate Havard is a journalist in New York City and a Tikvah fellow. You can catch Jack O’Brien’s Macbeth at the Lincoln Center from November 13, 2013–January 12, 2014. The image is taken from the Lincoln Center  production photos .