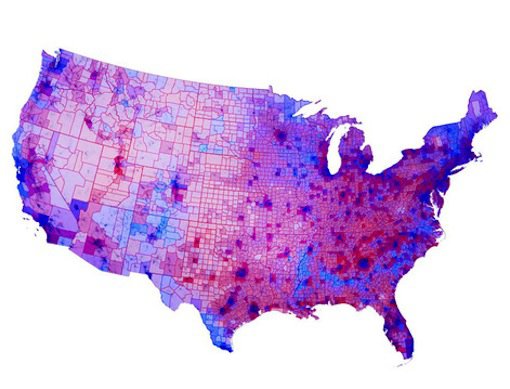 The center-right faces two interlocking problems. The first is external. After decades of assuming that America was a center-right country with a “silent majority,” the right was awoken to an America that gave a majority of the popular vote to Barack Obama not under the perfect circumstances of 2008, but under the ambivalent circumstances of 2012. To make it worse, the electorate gave twenty-five out of the thirty-three Senate races contested in 2012 to the Obama’s Democrats or to Democrat-aligned independents. Conservatives have awoken to find themselves in the minority. The center-right can perhaps, under very favorable circumstances, squeeze out one more presidential majority out of its old coalition, but to be competitive over the long-term, the right will need to win over converts rather than rally every last voter who ever cast a ballot for Reagan and the first President Bush. Reaching this nonconservative majority is complicated by one of the right’s internal problems. Conservatives of both the Republican establishment and Tea Party variety have reason to distrust their leaders and self-proclaimed champions. This poisons the ability of conservatives to pool their resources in order to speak to the majority of the country.

The right-leaning political elite and much of the rank-and-file had its expectations formed in the period from 1968–2004. That period saw the emergence of a latent center-right majority that included the bulk of the pre-1968 Republican base, suburbanites (many of whom were ancestral Democrats who had lost any connection to the Democratic machines of old), the bulk of white Southerners, and a share or urban working-class whites. This latent majority could be mobilized given a minimum of political competence and the absence of very unfavorable circumstances. This coalition became visible at the state level in Ronald Reagan’s 1966 election as governor of California and at the presidential level in the fragmentation of the Democratic vote in 1968. For much of this period, this latent center-right coalition was held in check at the congressional level by local or personal loyalties to particular Democratic politicians. A generation of Democrats like Lloyd Bentsen, Sam Nunn, and Albert Gore Jr. were able to accommodate themselves to the voters of this coalition well enough to prevent their replacement by figures even farther to their right. The 1994 election saw the latent conservative majority manifest itself in congressional voting.

The idea of the United States as a “center-right” country has a long pedigree (the lack of a major party explicitly committed to socialism, for example), but when conservative pundits talked about the US being center-right, this latent majority is what they had in mind. It wasn’t just conservative pundits. The Clinton-era “New Democrat” rebranding was about winning over enough wavering members of that latent coalition to win—given favorable circumstances. And this latent coalition was not just confined to winning a narrow electoral majority from places like Montana, Alabama, and Ohio. It was also able to win in California, New Jersey, and Connecticut.

That latent coalition has been in relative decline for a long time, but the consequences of that decline became undeniable with the 2012 election. Whatever Romney’s faults, he mobilized enough of that coalition to win under the demographic conditions of the 1980s and 1990s. Given the demographics of 2012, that coalition was no longer large enough to win absent some combination of a nearly perfect campaign and very favorable circumstances.

The demographic factors for this relative decline are clear enough . The fraction of nonwhite voters who have zero positive connection to the conservative movement is growing. The problem exists even with younger white voters. Romney won 59 percent of white voters, but he only won 51 percent of voters under thirty. The agenda and story of the center-right is just not resonating with emerging voter blocs.

People on the right are aware of this demographic decline, but have not been able to find a strategy to reach out to make gain among these emerging groups. A temptation has been identity politics short cuts. One source of the otherwise inexplicably intense enthusiasm conservative have demonstrated for younger politicians like Sarah Palin (women!) and Marco Rubio (Hispanics!) has been the sense that those candidates could (partly by the force of their youth, charisma, and their gender or ethnicity) recruit new members to the center-right coalition. It won’t be so easy.

Something making it harder is that the various factions of the right cannot use their money to effectively reach those who do not already have a center-right worldview. Whether they are large or small donors or whether they are establishment Republicans or Tea Party insurgents, conservatives have little reason for confidence that their money will be spent wisely.

The large right-leaning donors directed enormous funds to Republican consultants who had been schooled in the politics of 1968–2004. The result would have been ineffective in any era, and is best exemplified by an ad whose only target audience seems to be the Republican donors themselves. Even aside from such snake-eating-its-own-tail elements, the strategy of the “mainstream” donor-funded groups was not grounded in the priorities and experiences of either white swing-voters or persuadable whites.

Tea Party donors are not in a much better position. Candidates who have associated themselves with the Tea Party have sometimes proven to be even less than disappointments. Herman Cain’s presidential campaign was basically a publicity stunt to get a better talk radio contract. The best summary of his campaign was his disgusting withdrawal speech where, even as he was quitting the race in the course of a marital scandal, Cain bragged that his name recognition was now 99.9 percent. Michele Bachmann was, among her other qualities, a principled politician, but her appeal was limited to only a small fraction of the existing conservative base. She was not a bridge to the voters the center-right needs to recruit. Candidates will disappoint of course, but Tea Party enthusiasm has yet to find a candidate or institution with broad appeal when speaking on federal-level issues.

That doesn’t mean that a message doesn’t exist. It exists partly among wonks like Yuval Levin, James Capretta, and Robert Stein who have focused on contemporary concerns about health insurance coverage and take-home pay among people earning at or just under the median rather than focusing on cutting the marginal tax rates on high-earners. There are some politicians who have voiced some of the same concerns. Jeff Sessions has argued that economic policy ought to focus as much the interests of employees as on the interests of business owners that are represented by the Washington business lobbying groups. Mike Lee has called for tax cuts on middle-class and lower-earning working parents rather than for marginal tax rate cuts on high-earners. Paul Ryan has shown problematic instincts on issues like taxes and immigration , but he was able to get the House Republican caucus to back his plan for premium support Medicare. Even more impressive, Ryan has shown the capacity to learn. His later Medicare premium support plan was able to get the support of Democratic Senator Ron Wyden. Ryan is currently focused on putting together a set of policies to help those in poverty and it will be interesting to see what he produces.

It is unclear whether anyone who needs to hear about Lee’s tax proposal or Ryan’s (yet-to-be-announced) poverty plan will ever get a sympathetic account of them. They won’t get it through the mainstream news and entertainment media. The left can rely on the entertainment and news media to publicize ideas (climate change for instance) and allow campaigns to deal with the personality and opportunistic elements of politics. The right has no corresponding structure.

This is not just about persuasion. This is also about socialization. It is about showing large swaths of the public that the center-right shares their priorities and has policies that can benefit them. This is not about electing particular candidates, but creating a climate of opinion that would allow conservative candidates to win elections and enact their preferred policies. This is where the lack of trust in conservative leadership and institutions gets in the way. Establishment and Tea Party conservatives have not found a set of institutions in which they can work together to reach the rest of the country. This lack of trust, and this institutional weakness is felt every time conservative politicians try to explain themselves to a nonconservative audience.