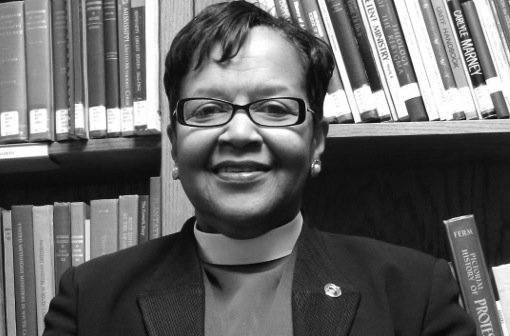 How much can one learn about another person in slightly less than one month—especially a person never seen before nor met again? “Not very much,” would be a reasonable answer. Yet that was not true of a special friendship I developed with AME Bishop Sarah Frances Davis during the month of October 2012. Bishop Davis died last month in Houston at age sixty-five.

The context of our meeting was the XIII Ordinary General Assembly of the Synod of Bishops at the Vatican. Bishop Sarah was there to represent the World Methodist Council and I the Baptist World Alliance. We were among the fifteen fraternal delegates invited by Pope Benedict XVI to participate with more than 300 Catholic bishops from around the world. (Bishop Sarah was the only female among the fratres .) The theme of the Synod was “The New Evangelization for the Transmission of the Christian Faith.”

Perhaps because the organizers of the meeting regarded Baptists and Methodists as ecclesial cousins, Bishop Sarah and I were assigned adjoining seats in the Synod hall. We stayed in the same Vatican residence, took most of our meals together, walked or rode the bus to St. Peter’s each morning, and actively participated in the work of the Synod—including the presentation of a brief address, and appointment to one of the circuli minores (small groups) that helped to prepare a consensual draft of the Synod’s work. We were also granted a personal meeting with the Holy Father. We worked from 9 a.m. till evening, six days a week, including Saturday. (We joked that the Puritans couldn’t teach Catholics anything about the work ethic.) In some ways, it was like getting a compressed Ph.D. in Catholic ecclesiology. But one of the greatest blessings was sharing this assignment with Bishop Sarah Davis.

Who was Sarah Frances Davis? A native of Port Arthur, Texas, young Sarah did not set out to become a bishop or even an ordained minister in her denomination. In fact, with her background in mathematics and management science, she had advanced far up the corporate ladder in the field of telecommunications. Then, in mid-career, she responded to spiritual stirrings in her heart and declared to her pastor, “I’ve got to preach!”

Once her calling crystallized in this way, she never looked back. She earned two additional graduate degrees in theology and devoted herself more and more to the work of the church, serving at first in low-paying jobs. Others recognized her giftedness and passion for Christ and, in 1997, she was appointed as the first female pastor of the 115-year-old Bethel AME Church in San Antonio. In 2004 she became only the third woman elected to serve as a bishop in the AME Church. That was also the year she was identified by Ebony Magazine as one of their 50 Most Intriguing Persons.

The African Methodist Episcopal Church was founded in Philadelphia in 1787 when Richard Allen and other members of St. George’s Methodist Church left the congregation rather than endure persistent racial discrimination. It was incorporated in 1816. However, the AMEC retained the doctrinal and liturgical distinctives of Methodism, including a form of church governance by bishops (a practice more common among Methodists in America than Great Britain). The AME Church is now worldwide with some 5 million members, about half of whom reside in the United States. Many AME bishops begin their episcopal service with a stint in Africa and this was also true of Bishop Sarah. She served four years in the Southern African countries of Lesotho, Botswana, Swaziland, and Mozambique. There she was a pioneer of outreach to churches confronted by violence and poverty. She became a special champion for orphaned and vulnerable children.

Her next assignment took her to Jamaica as the presiding prelate of the Sixteenth Episcopal District. In this role, she was perforce a “flying bishop” offering support to churches and schools over a vast tract of the globe—from South America through the Windward and Caribbean Islands to parts of Western Europe. In AME circles, however, she became better known as the “Prayer Bishop”—not only because she was a person of deep prayer in her own life but also because she encouraged the church to make communion with God a priority throughout its ministries and worship life.

Earlier this year, Bishop Sarah was asked to preach an ordination sermon for a group of itinerant deacons and elders in her church. Her text was the kenotic hymn of Philippians 2:5–11, especially the words about having the same mindset as Christ Jesus. She reminded these ministers-in-the-making that they were being called to a place of privilege and authority in the church that others who were not ordained lacked. They were being called in the name of Jesus Christ to preach, teach, lead, cast visions, and exercise discipline. Their guidebook was to be the Bible, the Word of God. Their model of ministry, Jesus who humbled himself and became obedient unto death.

There are no hook ups with “The Right Reverend Father and Mother in God” or with “The Reverend Doctor” which can get you where God has purposed that you go. There are no “do it this way and you’ll have nothing to worry about” recipes on this ministry journey. Instead, you are in humility to value others above yourselves and, in your relationships with one another, to have the same mindset as Christ Jesus.

Speaking directly to the ordinands, she admonished: “Stop holding on so tightly to your property, your family, your special child, your health, pride, dignity, reputation, congregations, church buildings, positions in annual conferences, jobs, protocol, your seniority—and even life itself. Only when we can empty ourselves of any of these ‘things’ can we serve the One who gave himself for us or serve his people as we should.”

At the time of her death on November 9, she was president of the AME Council of Bishops and vice-president of the World Methodist Council, a body of churches in the Wesleyan tradition representing more than eighty million Christians.

Bishop Sarah Davis was a strong woman leader, indeed a trailblazer, in her pastoral, episcopal, and ecumenical service. Yet in our work together at the Synod I saw no evidence of an ideology of gender or the kind of arrogance that is so un-Christlike in both male and female leaders. She was bold and confident but also tenderhearted and humble. She reminded me more of Mother Teresa than of Gloria Steinem. Bishop Sarah had great love and respect for her husband Claytie Davis Jr., who worked alongside her in her episcopal ministry. Of their relationship, she once said: “I am bishop at church, I am his wife at home. So, he is the head of the house, while I am head of the church.”

Bishop Sarah and I were asked to address the Synod on the same day, along with Metropolitan Hilarion from Moscow and bishops from the Armenian and Romanian Orthodox Churches. Her talk resonated with the theme of the conference: “It does matter that people know Jesus Christ in the twenty-first century. The world is hurting, lost, confused, distracted, distraught, diseased, and disgraced, and desperately needs healing, hope, and salvation. There is no other name to call on at a time such as this but Jesus Christ.”

She called for a form of holistic evangelism, one that embraced the total needs of persons including the physical, emotional, economic, social, political, and spiritual—without compromising the Gospel itself. Such evangelistic outreach, she said, must be empowered by the Holy Spirit and carried by messengers whose own lives have been transformed by the reality of the Good News they proclaim to others.

The success of the New Evangelization is closely related to the believability of the Evangelizer. It will be the Evangelizers who are placed under the microscope; not the processes, not the programs, nor the plans developed out of this Synod. People want to know that what the Evangelizers are advertising has already worked in their lives.

There was a hush in the Synod hall after Bishop Sarah spoke, as though all of us there seemed to realize that we had just received a challenge from Christ through this small but powerful woman of faith.

The world and the church were blessed by the presence and witness of Bishop Sarah Frances Davis. She was my friend during one special month in what was for both of us a highlight in our lives. Only one month—but it was a friendship fit for eternity.

Timothy George is dean of Beeson Divinity School of Samford University and chair of the Doctrine and Christian Unity Commission of the Baptist World Alliance. His email address is tfgeorge@samford.edu.