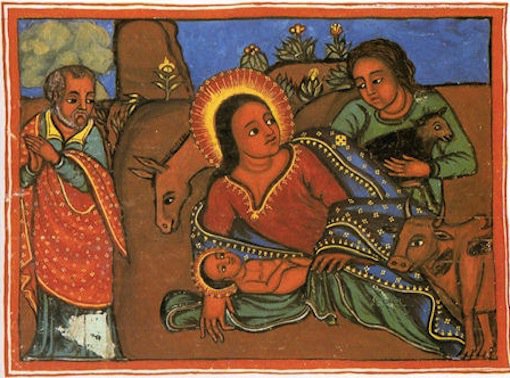 The mystery of Christmas begins with Abraham. It’s the story of love’s crazy concentration—God’s decision to get under our skin, as it were, by coming near and looking us in the eye.

The first chapter of Genesis adopts a cosmic perspective, depicting creation from God’s point of view. Then the focus shifts. In chapter two Adam and Eve take center stage and there’s an intimacy of description. But it remains universal. From the fateful fall through Cain and Abel to Noah and the Flood, the Bible gives us a primal, universal history. The perspective is all-encompassing, taking in humanity as a whole.

Then in chapter twelve the perspective shifts, and shifts radically. A single man, Abraham, is called from his father’s house. The rest of Genesis—indeed, the rest of the Bible—becomes parochial. Salvation does not rain down from above. Instead, it steals upon us in the night, coming through Abraham, coming through the unexpected fertility of Sarah, who laughed at the thought of a child, coming through the narrowest of passageways on Mount Moriah, where Abraham was willing to sacrifice Isaac.

Thus the incarnation is prefigured in Abraham in a particularly powerful way. God invests the future of creation in a single man: “In you shall all the nations of the earth be blessed” (Genesis 12:3). He is vulnerable, a man without a nation, without a homeland, a man whose wife is too old to bear children. He is by any worldly measure someone with no prospects, no promise, no future. But where the world sees impotence, God declares the opposite: “I will make of you a great nation” (12:2).

When the angel of the Lord came to shepherds tending their flocks by night, announcing the coming of their savior, doubtless they pictured a great warrior king arrayed in rich garments, a man radiating promise of great deeds, a savior clearly up to the job. But, again, God declares the opposite: “You shall find the babe wrapped a swaddling clothes, lying in a manger” (Luke 2:12).

Why is it so? Why the inauspicious patriarch? Why the people of Israel who, with defeat, Babylonian captivity, and then Roman dominion, are, after all, a historical failure? Why the infant born to an obscure woman from a provincial town in Palestine? Why the way of infancy, which is the very paradigm of dependence and weakness?

The infant in a barn. His powerless parents. The specter of Herod, ready to kill. This is the great mystery of Christmas—and of Good Friday. The Lord comes secretly. He dies alone.

Divine mysteries cannot be explained. But they can be contemplated. In my mind’s eye, on Christmas Eve I see a single commando tumbling out of the bomb bay doors of a B-52 at 30,000 feet. He falls silently in the midnight darkness into enemy territory. Satan sleeps, not knowing that he will organize a rebellion. The empire of sin will fall, not from without, but from within.

Or I picture the slenderest hypodermic needle plunging into the insensate flesh of our sin-intoxicated humanity. And through that needle God will inject himself! Our fatal sickness will be cured from within. Our hopeless corruption and inevitable march toward death will be reversed—from within.

From within. The divine invasion begins with Abraham. He is God’s secret agent in human history. His descendants, the people of Israel, are his guerillas. As their commander he is not remote. He does not issue orders from above. His command post is not on some distant shore. As Moses tells the Israelites, “The word is near to you, in your mouth and in your heart” (Deuteronomy 30:14). And what is near will be brought closer still. The LORD will come in power, and his finger will engrave his commandments on our hearts (Jeremiah 31:33).

And come he does. The Father sends His Son, not to force our hearts, but to win them. This cannot be done from without. Love’s power can’t be found in conquering armies or even just rulers. Its force grows with intimacy. And so God bends down to be with us. He goes onto his knees in the muck of sin in the stables of our lives.

Thus the awful (in both the original and modern senses of that word) reality of Christmas. It is a moment of decision for us. Like a commando severely hurt as he landed from far above, who has no apparent capacity to mount an effective action, or for that matter any action at all, the powerless infant turns his face to ours and makes what, in that obscure stable, seems like a crazy, impossible demand: “Join me.”

R.R. Reno is editor of First Things . He is the general editor of the Brazos Theological Commentary on the Bible and author of the volume on Genesis . His previous articles can be found here .