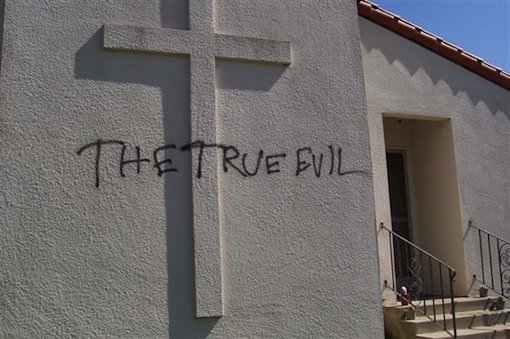 Christians are facing more and more difficulties in Western society. Every day, especially in Europe, churches and cemeteries are desecrated; blasphemy pretends to be an art for the general public; activists like Femen attack symbols of religion, and the media rarely miss an opportunity to belittle Christians and the Catholic Church. It is this latent hostility towards Christianity which explains the indifference, or even the complaisance, of our society towards the desecration of its religious heritage and the persecution of Christians throughout the world.

Take the example of the United Kingdom: since the adoption of the Equality Act 2010, penalties and convictions have dramatically increased. For example, a couple was denied approval to be a foster family because of their opinion on homosexuality, a doctor had to leave his position within the social service after he abstained from the decision to entrust children to same-sex couples, Catholic adoption agencies have been forced to cease operations due to their refusal to allow the adoption of children by same-sex couples, a City Council civil servant and a marriage counsellor were dismissed in the name of non-discrimination, after having respectively expressed their inability in all conscience to celebrate a civil union and to offer sexual advice to a gay couple.

However, is this discrimination?

Discrimination (in its contemporary meaning) is a violation of the principle of equality; it is the act of depriving a person of a right by reason of a particular trait compared to another person in the same situation. The typical example is refusing to hire someone solely because of their sex or religion, whilst there is no evidence that these personal characteristics may hinder the successful completion of the work. The refusal to hire a practicing Muslim in a butcher is not discrimination, but it would be discrimination in the case of a general bookstore.

Is a young Muslim girl who is excluded from a State school because she wears a veil discriminated against? Is it not rather that she deprives herself of the good of education by refusing to comply with the “equality” between students which is imposed by secularism? Can objectors invoke their own religious and moral beliefs to deny the application of the law? Can they claim they are discriminated against if the law is applied to them as it would be to any other person? Is equality not a uniform application of the law?

In fact, the concept of non discrimination is at an impasse because it is founded on an abstract equality: firstly, the real problem is not the matter of “discrimination against Christians,” but the fact that the law distances itself from justice and invades all spheres of life. The real question is that of the definition of justice and the source of public morality. What Christians perceive as an “anti-Christian discrimination” is none other than the violence with which another “morality” tends to replace the Christian anthropology. What some Christians perceive as a discrimination against them, is actually an injustice per se.

When a nurse is required to practice an abortion, where is the primary cause of injustice? In the obligation or in the abortion? For discrimination to exist there must exist morally equivalent situations comparable to one another. A nurse who is dismissed because she objects to abortion could claim discrimination only on the condition that her choice is considered as equivalent to the opposite choice of performing the abortion. Indeed, for a difference in treatment to constitute discrimination, the situations at hand must be similar. Yet this is precisely what the nurse conscientiously objects.

As a result, a person who complains of being discriminated against due to his beliefs or convictions places himself within the relativistic liberal paradigm. Such an approach is certainly doomed to failure. In our subjectivist culture, populated with supposed irrational subjects, individual conscience has lost its authority, so much that the positive law would be the only admissible and workable objective social norm: the “single thought”.

Christians should not intend to join the orchestra of oppressed minorities. Islamophobia, homophobia, Christianophobia, are they the same battle? Definitely not. The individual injustice that some Christians suffer is the result of a greater injustice relating to the very definition of man. The duty of Christians is not to make a life free of trouble, but to testify for all. The battle today relates to the determination of the source of morality, which the world tries to strip from the conscience and the Church.

So that morality will not be expelled from the public place and be made vulnerable to all injustices, the moral stance of Christian service is needed, more than ever, to testify. Asking to be tolerated is to renounce being understood and therefore to renounce testifying “the way and the truth and the life.”

Grégor Puppinck is the Director of the European Centre for Law and Justice, Strasbourg, France.