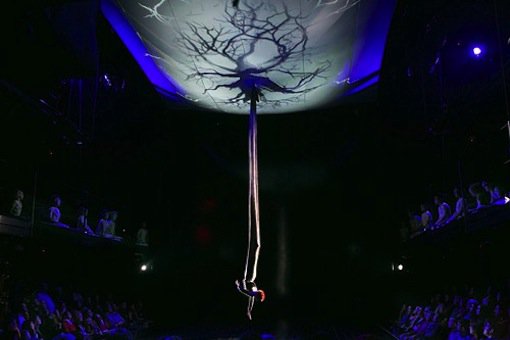 I had to promise my first born child to the fairies to get into Julie Taymor’s sold-out production of A Midsummer Night’s Dream, but it was worth it: This is fantastic Shakespeare, and it’s worth putting your name on the standby list to try and see it.

The play is full of the ethereal, aerial work that Taymor is famous for: Everything floats in and flies off and disappears with abandon. But despite its reputation for gauziness, Midsummer is actually a ruthless play: all four couplings marred with traces of compulsion, faithlessness, pettiness, and cruelty.

The more unpleasant aspects at work in the play stand out in part because of a strikingly beautiful but withdrawn Queen Hippolyta (Okwui Okpokwasili)—apparently forced into a marriage against her will—and a particularly nasty Demetrius (Zach Appelman), who, even before he is under the influence of fairy drugs, threatens both his lovers in this play with violence. Taymor isn’t inserting things that aren’t there—this is in the text. But she emphasizes it, most of all by making the fairies menacing rather than cutesy.

What is Shakespeare doing with all of this ugliness hidden between passages of flowery love poetry? Does he mean to state that this is the “real” way things are, underneath the surface? How does one reconcile the darker forces at work in this play and its happy ending, where otherworldy beings bless all the mortal couples with happy marriages and good-looking children?

In the words of the play, how do you “restore amends” after all this malice?

Taymor’s way is to use the forest as a staging ground for the parts of the soul where reason rules not. Forests are important in Shakespeare. There, human behavior is stripped of law and custom, (what the Athenians in this play would call nomoi), and chaos and nature rule until it is time for reason to reign again, that is, time to return to the city.

The forest in Midsummer is not only the backdrop for chaos, it is full of spirits who egg on the passions, which helps to make us more aware of what must be tamed within us.

It is false to say that what the forest reveals in these Athenians is the true human nature, because reason is what makes us humans. But the unreasoning parts also tell us a lot.

To put it modernly, the forest is to Shakespeare what dreams are to Freud. Taymor’s Midsummer seizes on this. Here, the fairies are not in the forest, they are the forest. They play the trees: They crouch on the ground, holding up sticks which they shift to and fro. Taymor’s forest is the unconscious, where the things simmering just below the surface come up for air and make themselves known, becoming less terrible by their expressing.

What does stripping the Athenians of their courtly manners (and at one point, their clothes) accomplish, besides making them ridiculous?

Lysander and Hermia want to get married, but Demetrius wants to marry Hermia too. Also, Demetrius used to want to marry Helena. Helena and Hermia are friends. That’s trouble. It all comes down to Helena. Demetrius was betrothed to Helena, but changed his mind. This makes Helena a little crazy. It also makes her a bad friend—when Hermia tells her that she’s going to elope with Lysander, Helena immediately decides to squeal on her. It’s as if she cares more about spiting Hermia than she does about winning Demetrius.

Helena’s spite could have real consequences. It’s established that the penalty for defying your parent’s marital edict is, in some cases, death. Helena might get her friend killed. Under these inauspicious circumstances, the lovers end up in the wilderness. Demetrius is also mad enough to kill Lysander. If this weren’t a comedy, things could easily turn bloody. Instead, the fairies show up and start applying love potions. Soon, everything is upside down: The men are now in love with Helena. And they both hate Hermia.

Helena’s id could not have designed a better fantasy.

They all fight. The women are at each others’ throats. Here, Taymor makes what’s implied explicit. (What’s the opposite of a Freudian slip? A Freudian proclamation?) The sheet that has heretofore hung from the rafters, drops to the stage. When the fight that has been building up this whole time finally happens, it happens with pillows. The stage is a giant bed. They tear each others’ clothes off.

The symbolism isn’t subtle. Taymor’s taking the Frank Underwood approach to psychology: Everything is about sex except for sex, which is about power. Now Helena has all of it. What’ll she do with it?

“To Athens will I bear my folly back,” she says. Helena has been following Demetrius around like a “spaniel.” Now, she remembers her own worthiness, calls her abasement “folly” and sets out for the city of reason.

The fairies intervene to correct their love-potion imposed mistakes. When the Athenians go home, the hope is that all of that pride and anger and lust and ego has been exorcised, and thus can be pardoned.

Helena was so angry at Hermia, and so in love with Demetrius, that she might have dared anything to hurt one and win the other. In a tragedy, this could have ended horribly. But thanks to the forest—where eros and thumos can be expressed without consequence—she’s able to reorient her soul towards reason again—forgiving her friend, confessing her own faults, and realizing that she will only go so far to win over the man she loves.

You don’t need to turn the stage into a bed to learn these things. What Freud told us about our desires, the Greeks already knew: Dionysus and Aphrodite can only be contained and educated, not eradicated. They will always be there, just outside the city gates. And if you try and ignore them, it is at your peril.

Kate Havard is a journalist in New York City and a Tikvah fellow.