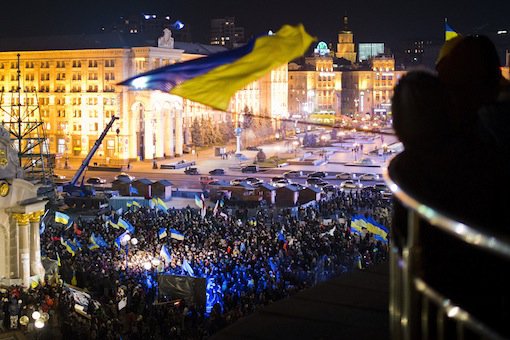 Ostensibly a protest against the abrupt cessation of talks between the corrupt Ukrainian president and the European Union negotiating Ukraine’s entry into the EU, the “Euromaidan” at Independence Square (maidan means “square”) in Kyiv, Ukraine has blossomed into a determined gesture of no-confidence in the government of Viktor Yanukovych. Since November 21, hundreds of thousands of citizens have shown their dissatisfaction with what they perceive to be Yanukovych’s capitulation to pressure from Russia’s Vladimir Putin by demonstrating and occupying the central square of Ukraine’s capital.

Like the Orange Revolution which took place in the same place nine years ago, the protest’s strictly non-violent nature is repeatedly emphasized and encouraged by leaders. Participants are served by a large number of priests from various confessions—Orthodox, Ukrainian Greek–Catholic and Roman Catholic, among others—who sleep, eat, pray and stand together with their flock in the tent city’s sub-zero temperatures. Prayer services take place on a daily basis both on the maidan itself as well as in neighboring churches. St. Michael’s Church alone sheltered three hundred protesters during the violent assault of riot police on the maidan on November 30 and it continues to provide room for those exhausted by work on the barricades or in the makeshift kitchens to lie down for a few hours of sleep along the walls to the soothing chant of prayer. In addition, the cathedral serves as a medical point for those on the maidan now and in case of renewed attack by the special police force Berkut.

Food is a special concern for those on the maidan, as many have spent and consumed whatever meager resources with which they first arrived in Kyiv. Donations from around the country as well as from abroad allow camp kitchens to function in the square from which tea, sandwiches and hot porridge are distributed as a means to warm and feed the empty bellies of the passionate demonstrators.

The virtues of compassion and mercy figure large in not only the words, but also the deeds, of those on the square. On the night of December 10–11, when the original barricades protecting the people were stormed and pulled down by the Berkut police in a failed attempt to clear the square of protesters, many members of the police were stationed at their posts for eight or more hours in freezing temperatures with nothing to eat. Once the attack was withstood and repelled, food was shared with the hungry and cold young police officers. Now that the government-paid and lodged participants of the “anti-maidan” across the road are in position, these are continually invited to join those persevering in their mission.

Bishop Borys Gudziak spoke December 12 at a press conference on the Euromaidan about the police attempt to storm the barricades and destroy the tent city that has sprung up there.

What happened in the last twenty-four hours showed that a small handful of people, armed with love, faith, and friendship, and with song and prayer on its lips, was able to stand against armed special forces. Force retreated to truth and social solidarity. This is a sign that should be a guide for the future.

The bishop is head of the Ukrainian Greek-Catholic eparchy (diocese) of Paris as well as being president of the Ukrainian Catholic University in L’viv, and he has participated actively in the protest on the Euromaidan. The university has issued a statement regarding recent events. “The Society of the Ukrainian Catholic University announces its support for civil disobedience against the President and his government, and stands with the people of the Yevromaydanom (Euromaidan) and—we believe—all the Ukrainian people. We seek the immediate resignation of the current government, the formation of the interim government and the declaration of early elections to create a new government with a fresh mandate from the people of Ukraine.”?

This particular public square is teeming with the life of the spirit as well as with political passion. It is willing to stand firm until the longed-for reforms of government appear and remains well bundled-up against the frosty December air. One thing it is not, is naked.