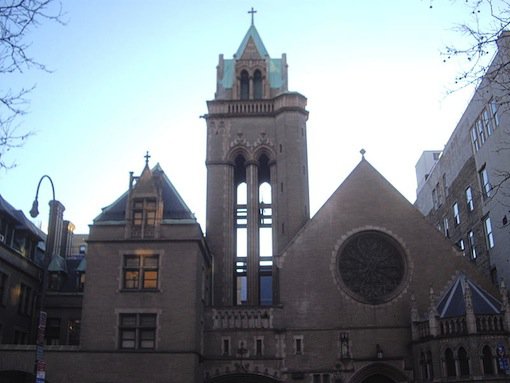 Yesterday was the fifth anniversary of Fr. Richard John Neuhaus’ death. The following appeared in the tribute issue (April 2009)—ed.

The death of Richard John Neuhaus shocked and saddened me. I learned of it by calling to express concern and assure him of my prayers in his fight against that cancer of unknown origin. It was too late. He had died the previous morning.

Although news of his death gave me a sinking sense of loss, I knew the loss was mine, not his, and my more enduring thoughts brought back a flood of memories that make me grateful for his life and his friendship.

We first became acquainted as students at Concordia Seminary in St. Louis, but inner-city pastoral ministries brought us together in a far more consequential way a few years later. Each of us was installed as a pastor on Good Shepherd Sunday in April 1961, he at St. John the Evangelist Lutheran Church in the Williamsburg section of Brooklyn, and I across the East River at Trinity Lutheran Church on the Lower East Side of Manhattan.

Those were heady days for inner-city ministry, and we were blessed with multiracial parishes that offered fascination and challenges that exceeded anything I could have imagined. We were only a couple of subway stops apart, so we often got together and occasionally collaborated on projects. Valparaiso University’s venerable president, O.P. Kretzmann, responded positively to our proposal that the university send annually a team of students for yearlong service, so each of our churches hosted young volunteers who helped us expand our work with children and their families.

As the civil-rights movement began blossoming, Richard took leadership of the New York Lutheran Human Relations Association, which got busloads of us to the 1963 March on Washington. A couple of years later, at his alerting, we found ourselves in Selma for a march across the Edmund Pettis Bridge two days after Bloody Sunday.

One of his more interesting initiatives during and following Vatican II was to invite a handful of Lutheran and Roman Catholic clergy to his parish house for periodic discussions on the prospects for unity between Rome and Wittenberg. In these Richard was clearly the leader, I the learner.

Richard was a master strategist, as he showed in the antiwar movement. So in 1972, when I was exploring with others the idea of launching a Christian-citizens lobby against hunger, we had lunch and I told him of the mixed responses I was getting, which left me uncertain. He listened, read my proposal carefully, and said, “I think you are on to something big.” That was a turning point for me. Richard subsequently played a key role on the organizing committee of Bread for the World and then for ten years on its board of directors. He helped us craft our policies and shape our strategies, and I am hugely indebted to him for all of this.

Richard had great self-confidence that sometimes came across as arrogance. I recall one meeting at which an older pastor chided him for that, after Richard, still a little wet behind the ears, had rebutted the man’s views on some point. “Ah,” sighed the chastened Richard, “you are right. I have a way of saying ‘Good morning,’ and people think I am issuing a papal dogma.” All of us cracked up.

He was a man of many kindnesses, and, especially during a time when I was going through a personal family crisis, he would invite me to his home for dinner and ranging conversation. Disagreements, as he moved out of my zone of comfort on some issues, did not diminish our friendship or his kindness.

I don’t minimize the importance of his insights on the role of religion in the public square, but I suspect his greatest and most enduring legacy will lie in his c­ontribution to the unity of the Church, for which he fervently prayed. He brought his background as an evangelical Lutheran to the Catholic Church and thought each had much to contribute to the other.

The last article of his that I read, moments before learning of his death, was his piece in the February issue of First Things called “On Loving the Law of God,” an engaging essay (responding to one by Gilbert Meilaender) on the law-and-gospel dialectic of Lutheranism. Rigidly understood, it often leads people to believe there is no hope in this life of gaining hearts that, by the grace of God, become more loving and obedient.

The article is vintage Neuhaus, the kind of theological bridge building that offers hope, because it reflects a listening across traditions that enriches all of us. I will miss that, but I remember him gratefully and with confidence that his passing through death into the greater presence of Christ is a victory.