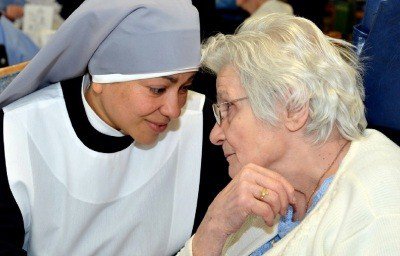 Supreme Court Justice Sonia Sotomayor dropped two balls on New Year’s Eve. At midnight she pressed the button to signal the descent of the famous ball in Times Square, marking the end of one year and the beginning of another. But, from the perspective of the Obama administration, she had already dropped the ball by issuing an order just two hours earlier granting temporary relief on the contraceptive mandate to the Little Sisters of the Poor. Without her intervention, the steamroller enforcement of the Affordable Care Act would have proceeded apace compelling either compliance or debilitating fines on the order. It is not surprising that abortion extremists have blasted the justice for “selling out the sisterhood” and for being “just a good Catholic girl” who “put her religion ahead of her jurisprudence.”

Earlier on the same day, Archbishop Joseph E. Kurtz, president of the United States Conference of Catholic Bishops, sent a letter to President Obama on behalf of his fellow bishops. He asked the president to use his executive authority to broaden the religious exemption to provide relief to many Catholics and other Christians in non-profit institutions affected by the mandate. In particular, he appealed on behalf of those whose religiously informed conscience will not allow them to provide—or to “designate” others to provide for them—sterilization, contraception, and abortifacients. Of course, such things are legally available at moderate costs in this country and could readily be given to all without forcing the Little Sisters and others to go through this conscience-crushing exercise. The situation could also be ameliorated by the government’s simply recognizing the Little Sisters as a “religious employer” which, by any commonsense definition, they clearly are. The Kurtz letter urged the president to offer “temporary relief from this mandate, as you have for so many other individuals and groups facing other requirements under the ACA.” To my knowledge, His Excellency has yet to receive a response.

How did a modest order of women religious—only 2,700 members worldwide—with a mission to care for the elderly poor become the center of a raging social and political controversy? The answer lies in the history of the order and the fidelity of its members to their founding vision. The Little Sisters of the Poor arose amidst the religious and political tumults of post-revolutionary France. Its founder was Jeanne Jugan, also known as Sister Mary of the Cross. As a young woman she declined marriage, worked as a nurse, and increasingly gave herself in ministry to the most indigent among the aged and the poor.

A turning point occurred in Jeanne’s life in 1839 when she encountered Anne Chauvin, an elderly woman in Brittany who was blind, homeless, and partially paralyzed. Jeanne literally picked Anne up, placed her on her shoulders, and carried her to her own home. There, she put her in her own bed and found a place for herself to sleep in the attic. This was the beginning of the order’s mission—providing loving shelter and hospitality, especially for older persons who were displaced, marginalized, and homeless.

Jeanne Jugan, who was canonized by Pope Benedict XVI in 2009, has been called the Mother Teresa of her times. The comparison is apt because both women demonstrated in a compelling way the mercy of Jesus to the poorest of the poor. (The Little Sisters of the Poor, who came to Calcutta in 1882, provided shelter for Mother Teresa during the early days of her ministry there.) Jeanne’s legacy lives on today in some 200 homes operated by the Little Sisters of the Poor, thirty-one of which are in the United States, including the one in Denver which brought the first-ever class lawsuit against Obamacare.

So why are the Little Sisters caught up in the mandate madness? Why can’t they just get on with their good works and forget about their conscientious scruples? Or, as has been suggested, why won’t they just sign a piece of paper and let someone else do their dirty work—surrogate soldiers and contract killings are quite common in some circles.

The answer is quite simple: They actually believe all that stuff they claim to believe. Just like the early Christians who refused to place a pinch of incense on the altar of the imperial deity in order to escape reprisals and recrimination, the Little Sisters of the Poor know, as St. Paul wrote to the Christians at Corinth, that they are not their own, that they do not belong to themselves, that they have been bought with a price (1 Cor. 6:19-20). The Little Sisters will not violate their core values for the sake of expediency. Among those values is this one: “Reverence for the sacredness of human life and for the uniqueness of each person, especially those who are poorest and/or weakest. This is reflected in care that is holistic and person-centered.”

On April 8, 2013, the Little Sisters responded to the “Notice of Proposed Rulemaking” from the Department of Health and Human Services by stating that “the federal government should not force us to counteract through the health benefits for our employees the very same Gospel of Life that we attempt to live out in communion and solidarity with the needy elderly.” Sister Loraine Marie, a superior for one of the order’s three American provinces, has said:

Like all of the Little Sisters, I have vowed to God and the Roman Catholic Church that I will treat all life as valued, and I have dedicated my life to that work. We cannot violate our vows by participating in the government’s program to provide access to abortion-inducing drugs.

The Little Sisters are not engaged in a political stunt but in an act of moral resistance to the egregious violation of religious freedom. Such freedom was enshrined in the First Amendment to the Constitution and codified in the Religious Freedom Restoration Act, supported and signed into law in 1993 by President Bill Clinton.

In February 2012, less than three months before he died, Chuck Colson asked me to join him in writing an open letter to our fellow evangelical Christians. It was first published in Christianity Today under the title “First They Came for the Catholics.” We called on evangelicals to stand unequivocally with our Roman Catholic brothers and sisters on the question of the contraceptive mandate—not because all evangelicals agree with Catholics about contraception itself (some do, some don’t) but rather because “when the government violates the religious liberty of one group, it threatens the religious liberty of all.” Two years later, we are a little further down the road, but what we said then applies even more urgently today, and not least to the Little Sisters of the Poor.

On New Year’s Eve, as Americans first heard about Justice Sotomayor’s ruling—some cheering, some bemoaning—the delightful and spontaneous Pope Francis in Rome picked up the phone to make a surprise call, as he is wont to do. He was trying to reach a group of Carmelite nuns in Spain in order to wish them a Happy New Year. Instead, he got that most annoying of modern contrivances, the answering machine. In the message he left, the pope wondered what the good sisters were doing on New Year’s Eve that they could not answer the phone (in fact, they were praying). He promised to call them back, which he did.

I can think of no group that better exemplifies the mission and heart of Pope Francis with his winsome call for mercy and ministry to the poor, the neglected, the least wanted in our society than the Little Sisters of the Poor. Abortion and contraception are not the central concerns of their day-to-day ministry and work. But their consciences have been well formed on these issues by the best of Catholic teaching, including this statement by Pope Francis last August, often reiterated before and since, that “human life must always be defended from its beginning in the womb.” Wouldn’t it be wonderful if the Holy Father, prompted by the Spirit, would be led to call the Little Sisters of the Poor? I believe they would answer the phone.

Timothy George is founding dean of Beeson Divinity School of Samford University and chairman of the Board of the Colson Center for Christian Worldview. His email address is tfgeorge@samford.edu.