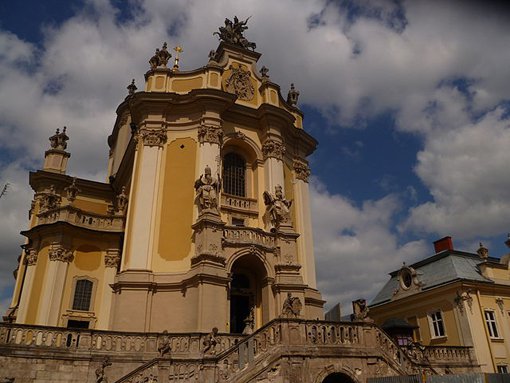 My fascination with Ukraine began in 1984, during a sabbatical year at the Woodrow Wilson International Center for Scholars. There, one of the first friends I made among my fellow Fellows was Dr. Bohdan Bociurkiw, a Ukrainian-Canadian professor at Carleton University in Ottawa. We first connected through a mutual interest in religious freedom behind the iron curtain; within a few weeks, Bohdan was giving me private tutorials in the history and culture of his native land, including an in-depth introduction to the story of the Ukrainian Greek Catholic Church (UGCC).

In 1984, the UGCC was not only the largest of the eastern Catholic churches; it was the largest underground religious body in the world. Outlawed in the Soviet Union by the infamous “Lviv Sobor” of 1946 (a farce orchestrated by the Soviet secret police), the UGCC had continued its ecclesial life under draconian circumstances. Most of its bishops and clergy were deported to GULAG camps; the Church’s seminaries and liturgical life were conducted clandestinely, often in forests. Yet the leader of the UGCC, Cardinal Josyf Slipyj (the model for Morris West’s “pope from the steppes” in “The Shoes of the Fisherman”), never abandoned hope for a different future, and during his Roman exile he laid the groundwork for an institution Bohdan Bociurkiw never lived to see but would have loved: the Ukrainian Catholic University (UCU) in Lviv, the only Catholic institution of higher learning in the former USSR.

For the past 15 years or so I have taught UCU students and graduates in the Tertio Millennio Seminar on the Free Society in Cracow. Over that period I have seen their self-confidence, their intellectual maturity, and their commitment to building a decent future for their country grow. Then, this past July, I had the honor of delivering the commencement address at UCU, where I spoke of Ukraine’s 20th-century martyrs as the foundation on which a free and virtuous Ukraine could be built in the 21st century.

Less than five months later, some of the graduates I had addressed, and some of the students with whom I had discussed the moral-cultural foundations of democracy at a philosophy seminar the day before commencement, were on the front lines of a wave of mass public protests in Ukraine, launched when the corrupt government of President Viktor Yanukovych abruptly halted negotiations with the European Union for Ukraine’s eventual entry into the EU.

Ukrainian civil society was virtually obliterated by communism. The Ukrainian protests of the past two months have seen the spontaneous rebirth of civil society, led in large part by young people with no memory of communism who know that the present moral and cultural conditions of their country are intolerable—and that’s before we get to the dreadful economics and the wretched politics. Among the leaders of these young democrats and human rights activists are graduates and students of UCU, who have learned their dignity as men, women and citizens from a university faculty that takes character formation as seriously as it takes intellectual formation.

Ukraine’s future is an issue of great strategic consequence, which Vladimir Putin understands, if many Americans (including an administration that was seriously behind-the-curve on events in Ukraine) do not. A Ukraine integrated into Europe guarantees that there will be limits to Russian revanchism, an easing of Russian pressure on Poland and the Baltic states, and no de facto reconstitution of the Soviet Union. A future Russian leadership, realizing that Putin’s revanchist game was up, just might stop throwing elbows internationally and attend to Russia’s vast internal problems. Much is at stake in Ukraine, geopolitically.

A lot is also at stake morally. The Ukrainian popular uprising of late 2013 was not motivated by an unquenchable thirst for MTV and other expressions of western decadence. It was motivated by a deep yearning for truth, justice, and elementary decency in public life. The Ukrainian Greek Catholic Church, a Church that long embodied Pope Francis’s “peripheries,” is now fully engaged in the contest for the moral future of Ukraine. That brave Church deserves the solidarity of Catholics throughout the world.