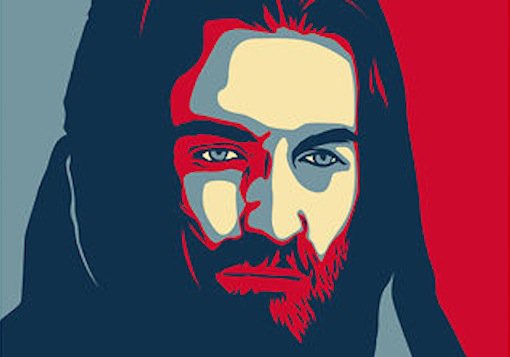 John Howard Yoder’s now-classic The Politics of Jesus sparked a revolution. For centuries, Jesus’ lordship had been foundational to Western political thought. By the seventeenth and eighteenth centuries, Jesus had become irrelevant. Locke doesn’t use the name “Jesus” in either of his two treatises on government. Adam Smith mentions Jesus only once in Wealth of Nations, in a footnote reference to the “compagnie de Jesus.” There isn’t even a footnote reference to Jesus in Theory of Moral Sentiments.

Even among modern Christians, Jesus hasn’t been especially important for political thought and social ethics. Niebuhr refers to Jesus in Moral Man and Immoral Society only to show how useless, even dangerous, Jesus’ transcendent “pure religious idealism” can be when applied to the rough battles of real-life politics.

For Yoder, Jesus’ non-violent resistance provided the model for Christian activism. His book opened a floodgate, and today everyone talks about the politics of Jesus.

But the politics of Jesus is often truncated. In his fine book on The Drama of Ephesians, Timothy Gombis of Cedarville University contrasts what he characterizes as the power-mongering of contemporary culture warriors with Jesus’ way of “humility and weakness.” In his resume of apostolic suffering in 2 Corinthians, Paul exemplifies cruciform discipleship.

When Gombis and others talk about the weakness of Jesus, they are thinking of his pliant submission to arrest, unjust trial, execution. But those episodes are the conclusion of Jesus’ life story, and it’s crucial to recall what led up to that moment of silent acquiescence. Weakness is the denouement of Jesus’ drama. Detached from the rest of the plot, it can only produce confusion and unfaithfulness.

What preceded Jesus’ silence in Pilate’s Praetorium were several years of inflammatory non-silence. Jesus condemned Pharisees and scribes as hypocrites who sought glory from men rather than God and neglected the weighty matters of the very Torah they claim to revere. He called them sons of hell and children of the devil, white-washed tombs full of dead men’s bones, murderers of the prophets. He told clever stories that always slotted pious Jews in the role of villain or stooge—the surly older brother of the prodigal son, the prissy Levite and priest of the good Samaritan, the murderous tenants in the parable of the vineyard.

When his talk didn’t offend, his actions did. He healed on the Sabbath, fully aware he was violating Jewish scruples and stoking up murderous rage. He ate with publicans, sinners, and prostitutes, flouting Jewish food pieties. He touched lepers and women with flows of blood. In the last week of his life, he tore into the temple exchange, tipping tables and scattering coins and chasing animals through the temple courts. Jesus was a troublemaker, and, to the Jews, an insolent one.

He became a folk hero. He spoke out loud the complaints whispered by common people against scribes, Pharisees, and priests. They laughed when he made the scribes the butt of his parabolic jokes. Crowds, some of them huge, gathered wherever he stopped to teach and followed him around the countryside.

The Jewish leaders didn’t send soldiers to seize him in Gethsemane because they misunderstood what was happening. It was perfectly reasonable for them to expect a riot when they went to capture this fearless preacher who defied the establishment and won a huge audience. The surprise came when Jesus calmly, peacefully identified himself and allowed them to arrest him. The soldiers fell backward in utter shock.

This doesn’t mean Jesus suddenly veered onto the path of the cross when the soldiers caught up with him in Gethsemane. Entirely the opposite: He took up the cross as soon as he preached his first sermon in Nazareth. Throughout his public life, he was, as N. T. Wright puts it, “crucifiable” because he acted more like a protester with a picture of an aborted fetus than like your typical mainline rector. If he hadn’t, he would have ended an uneventful life with a placid death. Not every disruptive agitator idolizes power.

At the crucial moment, Jesus submitted in weakness and humility, and in weakness and humility he won his greatest victory. When we ignore the lead-up to the cross, though, we miss the politics of Jesus altogether. Submission comes at the end of a life of very public proclamation. To follow Jesus from the beginning, we need to be faithful in exposing the idols of our world, and joyfully accept whatever consequences come. If we don’t follow Jesus at the beginning, we’re unlikely to have an opportunity to follow him to the end.

If we start with silence, we’ll countenance injustice and accommodate to wickedness. More seriously, if we start with submission, we are not actually following Jesus. We end up in the company of Niebuhr, with a Jesus who is no use in the conflicted world of power. It’s an ironic place for a politics of Jesus to find itself.

Peter J. Leithart is president of Trinity House. He is the author most recently of Gratitude: An Intellectual History, forthcoming from Baylor University Press. His previous articles can be found here.