Look at the cover of this anthology from 1957. 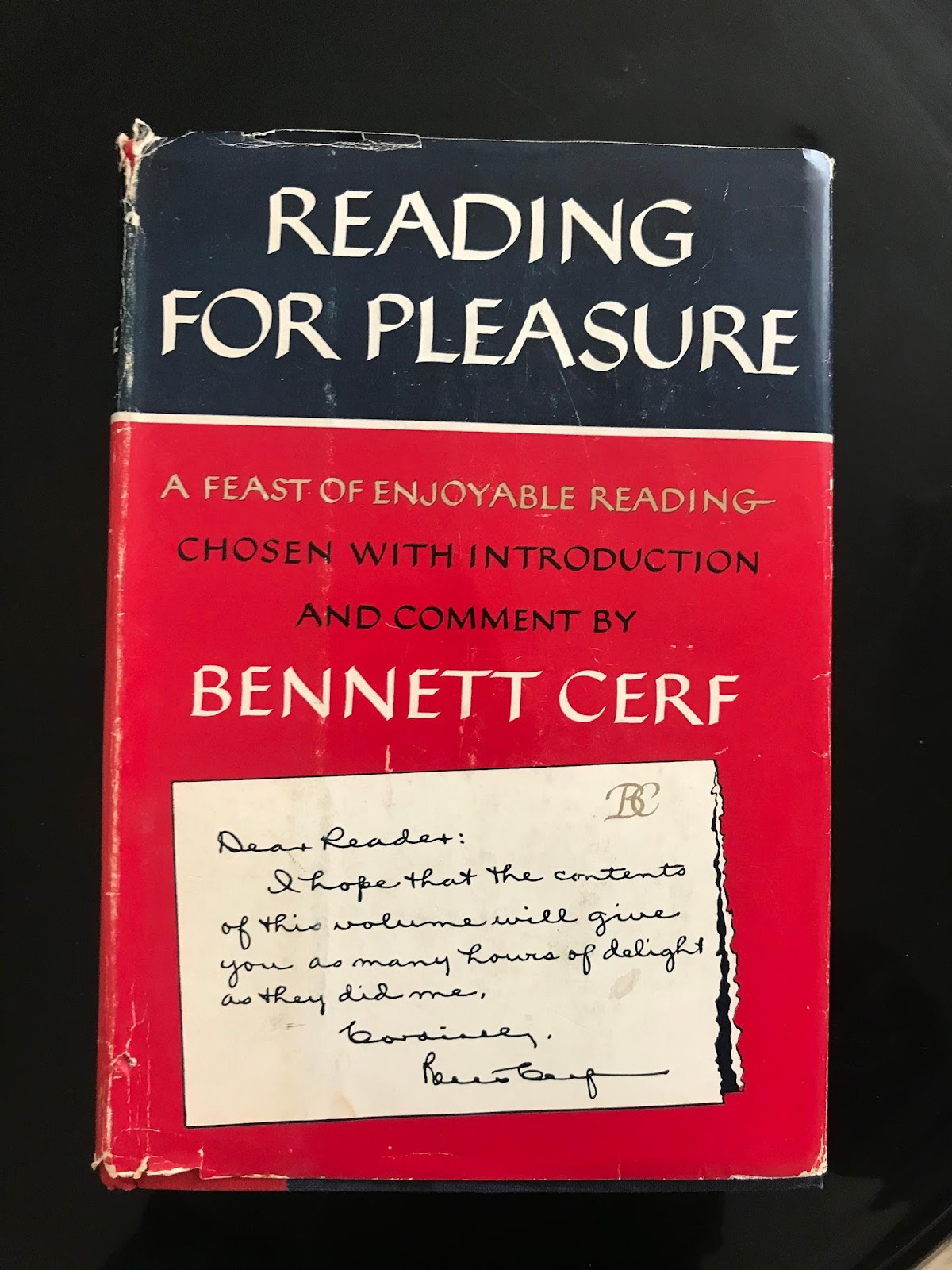 It is a genuine artifact from the mid-twentieth-century golden age of literary reading in America, when Faulkner and Hemingway, Steinbeck and Ellison, Frost and Marianne Moore were monumental figures. Even the editor, Bennett Cerf—whom, I assume, not many readers of First Things will recognize—was a celebrity known to millions as the founder of Random House and a panelist on the popular TV show “What's My Line?” (Cerf got the U.S. rights to Joyce's Ulysses and expanded the Modern Library project into a blockbuster of cheap cloth classics.)

The cover shows how significant the habit of reading was at that time. Variants of “read” appear in three places and are clearly a mode of advertising, which is to be expected for 1957, when the Book of the Month Club was going strong, the publication of Webster's Third New International Dictionary would spark a national debate (the title page of my copy is shown below), and the voice of the Beat Generation was not an actor or a rock star or an athlete, but a novelist. 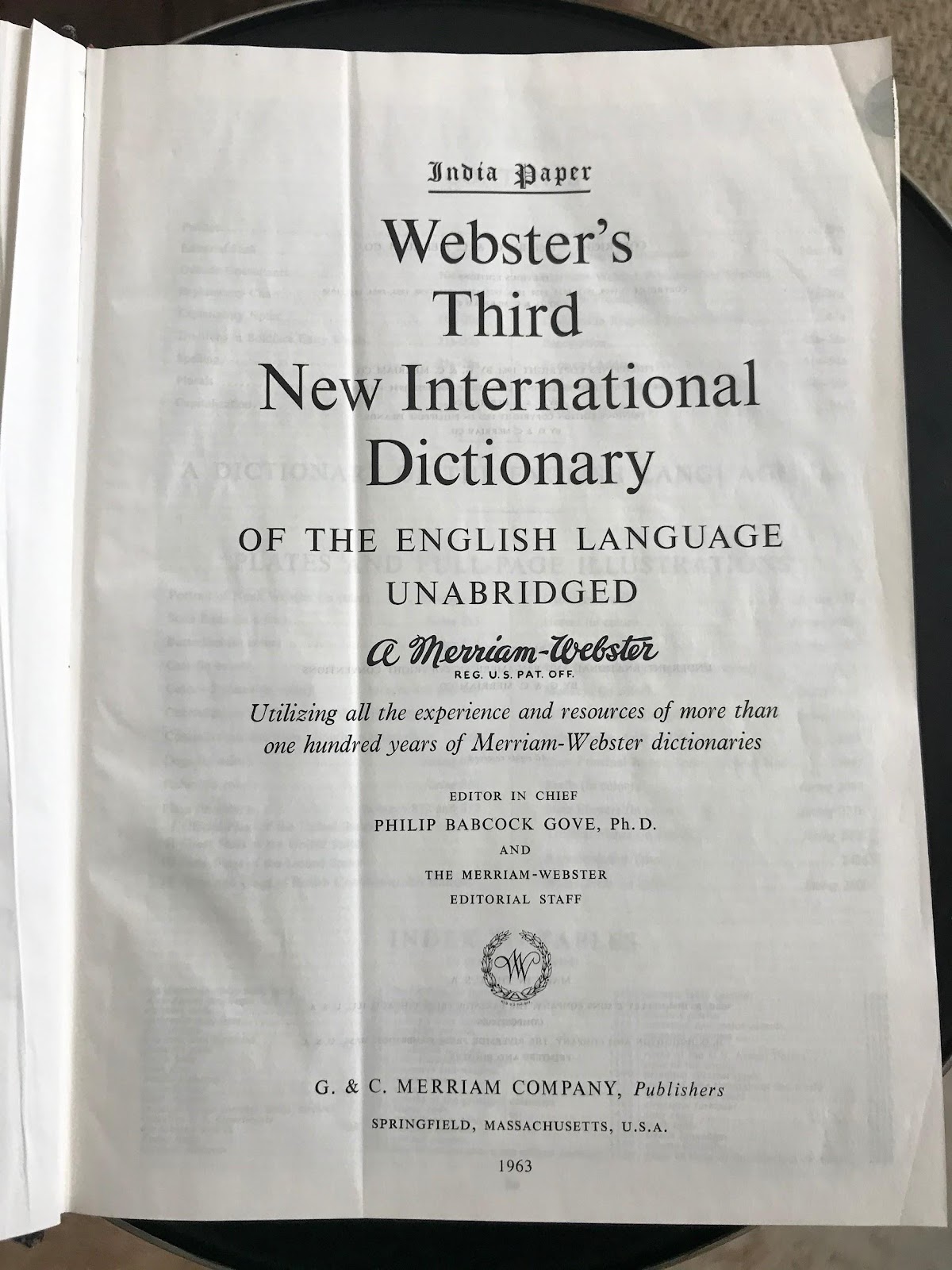 Here is a photo of the Table of Contents of Reading for Pleasure:

And finally, here is a passage from one of the selections. The scene takes place in a compartment of a train speeding through the Midwest on its way to New York City. Two 15-year-old boys, heading to a boarding school for the fall term, are talking. One of them is a returning student. The author is one of the great stylists of the American language. Can you guess who it is?

“I don't like football. I don't like to go out and get a crack in the eye.” Lewis spoke aggressively, for his mother had canonized all his timidities as common sense. Basil's answer, made with what he considered kindly intent, was the sort of remark that creates lifelong enmities.

“You'd probably be a lot more popular in school if you played football,” he suggested patronizingly.

“You wait!” he cried furiously. “They'll take all that freshness out of you.”

“Clam yourself,” said Basil, coolly plucking at the creases of his first long trousers. “Just clam yourself.”

I just read Christian Wiman’s Survival Is a Style, his first collection of new poems in six years. One thing I love about Wiman is the way he reads his own poetry (here’s a favorite example), which he does in full submission to the music of his verse—a trait I’ve found to be surprisingly uncommon in poets. I’m particularly thankful for such a trait in a poet whose style frequently mimics the rhythms of Hopkins. As an example, take these lines from “All My Friends Are Finding New Beliefs”:

. . . In a highly literary and hitherto religiously indifferent Jew
God whomps on like a genetic generator
. . .
One man marries a woman twenty years younger
and twice in one brunch uses the word verdant;
another’s brick-fisted belligerence gentles
into dementia, and one, after a decade of finical feints and teases
like a sandpiper at the edge of the sea,
decides to die.
Priesthoods and beasthoods, sombers and glees,
high-styled renunciations and avocations of dirt,
sobrieties, satieties, pilgrimages into the very bowels of being . . .

Some of the poems possess a different sort of musicality, but all are clear. And all exemplify well Jack Spicer’s dictum that “Prose invents—poetry discloses.”

Wiman said in an interview last year that poems “work” when they show us something of reality—they “salvage” reality for us, something we need help with time and time again. I can think of no clearer way to describe the result of these new poems, which in their syntax, song, and metaphor work to unveil this great big world and redeem the details I’d mistakenly written off as superfluous or unimportant.

I am currently reading Daniel Kehlmann’s Tyll—a historical novel set in early seventeenth-century Europe, during the Thirty Years’ War—inspired by the multifaceted Tyll Ulenspiegel, a character from German folklore. Ulenspiegel has been many things throughout the years: a jester, a vagrant, a folk hero. In all incarnations, however, he always acts as a Spiegel (“mirror”) to mankind. And in Kehlmann’s Tyll, the reflection is unflattering.

Like Narcissus, we cannot look away. The novel is an interesting blend of Nietzschean themes and magical realism. Tyll walks a tightrope high above a crowd of villagers in the introductory chapter, reminiscent of the jester in Thus Spoke Zarathustra. He commands them to throw their shoes at him, and laughs at their stupidity when they all-too-readily comply; there was no purpose to the exercise. The town is soon engulfed by violence as everyone tries to retrieve their shoes. Deep-rooted resentments fuel the fire.

The mythicism surrounding the character is not lost, even as Kehlmann gives Tyll concrete beginnings. His father, a miller well-versed in the “old ways” of healing, is accused by two wandering Jesuits of being in league with the Devil. Tyll leaves his town on the wagon of a balladeer to avoid his father’s fate. Not much later, he dances to the tale of the miller’s demise. The novel presents a dark take on the human soul, but the timelessness of Tyll’s character—his ability to rise above the crowd almost like a god, an Übermensch—is seductive. I have yet to see whether the novel will ultimately convict man for, or absolve man from, his sins.

0
Print
Email
More on: What We've Been Reading, Books
Prev Article
Next Article