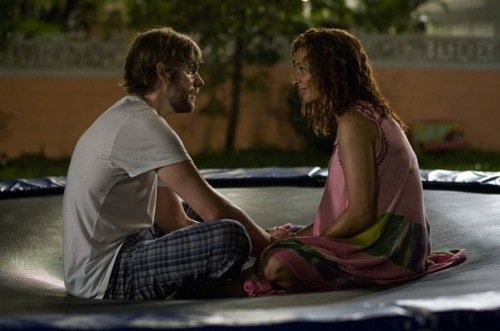 “I wanna be that dad who knows how to make stuff out of wood,” Burt Farlander says, deciding for the first time what he wants to be when he grows up.

It’s a little late for such thoughts, since he’s in his mid-thirties. But he never had much of a reason before now—now that he’s going to be a father. In Away We Go , a film directed by Sam Mendes ( American Beauty ) which opens in movie theaters today, Burt (played by The Office star John Krasinski), and Verona De Tessant (played by former Saturday Night Live comedienne Maya Rudolph), have been living together unmarried for a decade. Expecting their first baby, they suddenly realize that they’ve done little with their lives: They live in a trailer, have a window made of cardboard, and have been wasting years living in a town they don’t know why they’re in.

With this new birth on the horizon, however, they start on a journey in search of a new home in which to start their family. Why is it no surprise they make the journey much harder than it needs to be? Verona refuses to marry Burt, reducing the chance they’ll ever reach their destination, and the truth is, in Away We Go , the couple hardly goes anywhere. Burt and Verona are static throughout. They don’t provide the drama. They simply witness the drama happening around them: the funny, bizarre lives of the different families they visit as they give different cities a trial run as their future home. Phoenix, Tucson, Montreal, Miami—one after another the couple passes these towns like kiosks at a carnival, responding with a nonresponse.

Especially Verona. Maya Rudolph’s chief achievement in this film is her mastery of the deer-in-the-headlights look, as if on eternal repeat saying, “I can’t believe this is happening.” This doesn’t do much to help the film, and, considering her range as an improv actress, is a real loss.

But there are some other tremendous actors in the film, though, including comedian Jim Gaffigan, Allison Janey at her most outrageous, and Chris Messina who delivers the most powerful lines in the script. Without doubt, however, the best performance is by Maggie Gyllenhaal, who perfectly satirizes a university professor living by holistic, yoga-esque Eastern philosophy. We’re introduced to her when Burt and Verona enter her campus office to see her breast-feeding her two children at once, including one who is old enough to turn his head and politely greet them. In one of the funniest segments of the movie, she describes her principled stance against the use of strollers with her children, saying, “I love my children; why would I want to push them away from me?”

But the sweet, funny moments don’t come without the bitter. A few days previous, Burt applies for a promotion at the company for which he is a telephone-based insurance salesman. He fails to get the promotion, and, worse, Verona is not surprised. One suspects the reason she’s not marrying him is because she has no confidence in him to provide for a family. The only thing sadder than his pathetic failures are the many scenes when she’s rolling her eyes at them.

After he reports back from the job interview, she turns away from him on the motel bed where she’s been sleeping, hides her face in the pillow, and starts to cry. “What are we going to do?” she asks hopelessly. “No one’s in love like us, right?”

If you have to ask that question, the answer is the one you don’t want to hear. At the start of the movie, shortly after losing their electricity, Verona asks:


To the end, she tries to stand firm in refusing to marry Burt, as a matter of principle. (Although it really doesn’t come off as principled, as she casually puts it several times: “I just don’t get the point of marriage”; as if it logically follows that she should therefore refuse it vehemently.)

Verona’s refusal adds nothing substantial to the plot except, one supposes, to seem different (never mind that unmarried cohabitation is the popular choice for couples today), to make a last stab of defiance to anything resembling tradition and roots. But then she can’t help her natural urge to exchange vows moments later—just as long as they are her own, made-up version. But you find that in the process of redefining it for herself, it loses its richness, its humility, it seriousness. We end up with a sequence of I do statements that ends with Burt asking, “Do you promise that if I die an embarrassing death . . . you’ll tell our daughter that I died after saving thousands of Chechnyan orphans in hand-to-hand combat with Russians?” Verona solemnly replies “I do.”

However pitiful, the film paints humorously the inestimable power of denial. Burt and Verona refuse to accept even the most obvious truths in front of them, all in the effort to be makers of their own meaning. The entire plot, in fact, hangs on the idea that home isn’t something one is born into or given—home is something self-determined. They cling to this existential freedom even when the home they finally choose proves to be Verona’s childhood home—the place where she still has roots. Driving down the road leading to her old house, Burt asks her if it looks familiar. Well, she replies: “I want to feel like we found it. Does that make sense?”

It only makes sense in a world where people would rather die than feel as though they’re not in control of every aspect of their life. Just as the movie watchers hope that some character formation is about to take place—some sense of humility in the face of Verona’s indebtedness to her roots—she remains static and true only to her denial, holding for dear life to the idea that she’s the maker of her world. All the while, her human emotions betray her, and we know that they choose this home for reasons greater than its nice scenery.