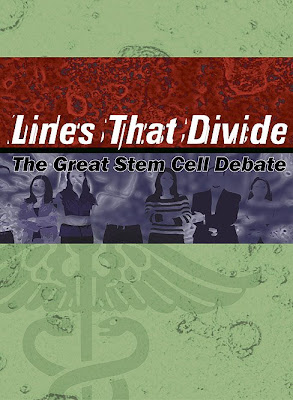 The Center for Bioethics and Culture is distributing the documentary Lines That Divide: The Great Embryonic Stem Cell Debate, about embryonic stem cell research.  From the film’s summary:

First, the viewer is introduced to the basic science of stem cells and how they are gathered for medical use. Embryonic stem cells and adult stem cells are both explained along with their similarities, differences and methods of procurement. Scientific issues are examined, such as the benefits, drawbacks, and scientific and medical results of both.

The documentary also introduces the moral issues being argued in the public square – issues of human life and the medical utilization of embryos, as well as women’s health issues that arise from the procurement of eggs used in much of the research. Scientists, doctors and ethicists on both sides weigh in with their views.

One of the solutions to achieving the mass amount of stem cell lines needed for this burgeoning stem cell industry is cloning. The documentary examines cloning, what it is, what it isn’t, as well as the current scientific, moral and political issues surrounding this volatile issue in the debate.

Lastly, the film looks at the horizon of scientific and medical research in stem cells. New and alternate forms of creating or accumulating stem cells seem to be making breakthroughs monthly around the world as scientists explore the vistas of possibilities, while seeking to address the ethical issues surrounding the lines that divide.

There are also some clips for people to see, including an aging, gray haired, troglodyte that some of y’all might know. Check them out here.