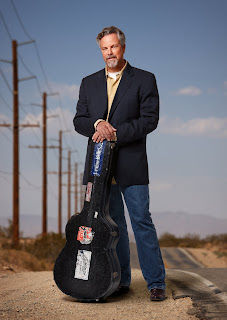 A week from today, I am traveling to my home state of Texas to visit my best friend who lives in San Antonio. While I’m there, we’ll be going to see one of my favorite singer-songwriters, Robert Earl Keen , in concert.

Substantial cult following notwithstanding, Robert Earl Keen is not nearly as well known as he ought to be. Keen, who once shared a house with alternative country crooner Lyle Lovett while the two were at Texas A&M, has not met with the same mainstream recognition as his more famous college roommate (who, after all, has a marriage to an Oscar-winning actress on his resume). Instead, the unheralded but uniquely talented songwriter has had to settle for the status of Texas Music icon (which ain’t a bad thing to have to “settle” for, especially when it means that a former Texas Governor and President of the United States is a big fan and it gets you a gig playing at his 2004 Presidential Inauguration ).

Keen, who has been referred to as “the godfather of Texas Music” (a title that arguably could be shared with such other singing/songwriting Texans as Townes Van Zandt, Willie Nelson, and Jerry Jeff Walker), is enjoying an auspicious 2009 . In addition to this fall’s release of his new album, The Rose Hotel , Keen is also celebrating the 20th anniversary of his signature song, The Road Goes on Forever , which tells the story of the ill-fated romantic adventures of a modern-day-Bonnie-and-Clyde duo named Sherry and Sonny. The song strikes a chord with Keen’s audience, and its appeal has led to recordings over the years by other artists such as Texas roots rocker Joe Ely and the country supergroup The Highwaymen (featuring Willie Nelson, Kris Kristofferson, and the late Waylon Jennings and Johnny Cash). It’s not surprising, then, that The Road’s gala year is being commemorated with an anniversary tour , a new coffee-table-style book titled The Road Goes on Forever and the Music Never Ends , and a tribute album titled Undone: A MusicFest Tribute to Robert Earl Keen , which features some of the Texas music scene’s hottest artists paying homage to their pioneering musical forefather.

If you’re not aware of Robert Earl Keen, or if you’ve heard of him but have never taken the opportunity to become more familiar with his amazing storytelling in song, this year may be the time you should take a listen.

More about Robert Earl Keen from the June 2009 issue of Texas Highways :


One of the first things you notice about Robert Earl Keen is that he talks the way he writes. The balladeer—whose iconic song “The Road Goes On Forever” marks its 20th anniversary this year—is sitting under a tree outside The Zone recording studio in Dripping Springs, some 100 miles east of his home near Kerrville. The wind’s whipping, the sun’s shining, and he’s reflecting on life, how good it is, and about the good, big year he’s living. As he talks, he spins yarns in his innately cadenced way, unfurling narrative as he goes.

The 53-year-old Houston native is indeed having a good year. The University of Texas Press recently published his book The Road Goes on Forever and the Music Never Ends. Keen’s creative team is working on a documentary called The Year of the Road, which features fans’ own tales about “The Road Goes On Forever” and the song’s effects on their lives. In January, he saw the release of a two-disc tribute album (Undone: A MusicFest Tribute to Robert Earl Keen), recorded live in Colorado by a slew of new-generation songwriters who revere his music. And the songwriter garnered what you might call a Grammy-by-association in February, when George Strait’s Troubadour—which includes a song written by Keen titled “West Texas Town”—won Best Country Album.

Keen is excited about where the road has led him: the 2009 tour, the ink from major newspapers, the outpouring of love from fans, and the record he’s working on with powerhouse producer and musician Lloyd Maines, due out sometime this year. Despite all that, one of the things Keen enjoys talking about most is Texas. [ More ]