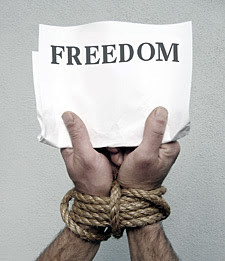 CNN, of all networks, has a devastating critique out about Obamacare and the false assertions about health care reform being made by the president.  From, “The Five Freedoms You’d Lose in Health Care Reform” by Shawn Tully:

1. Freedom to choose what’s in your plan

The bills in both houses require that Americans purchase insurance through “qualified” plans offered by health-care “exchanges” that would be set up in each state. The rub is that the plans can’t really compete based on what they offer. The reason: The federal government will impose a minimum list of benefits that each plan is required to offer...

2. Freedom to be rewarded for healthy living, or pay your real costs

As with the previous example, the Obama plan enshrines into federal law one of the worst features of state legislation: community rating. Eleven states, ranging from New York to Oregon, have some form of community rating. In its purest form, community rating requires that all patients pay the same rates for their level of coverage regardless of their age or medical condition...

The bills threaten to eliminate the one part of the market truly driven by consumers spending their own money. That’s what makes a market, and health care needs more of it, not less. Hundreds of companies now offer Health Savings Accounts to about 5 million employees. Those workers deposit tax-free money in the accounts and get a matching contribution from their employer. They can use the funds to buy a high-deductible plan — say for major medical costs over $12,000. Preventive care is reimbursed, but patients pay all other routine doctor visits and tests with their own money from the HSA account. As a result, HSA users are far more cost-conscious than customers who are reimbursed for the majority of their care...


4. Freedom to keep your existing plan

This is the freedom that the President keeps emphasizing. Yet the bills appear to say otherwise...The bill gives ERISA employers a five-year grace period when they can keep offering plans free from the restrictions of the “qualified” policies offered on the exchanges. But after five years, they would have to offer only approved plans, with the myriad rules we’ve already discussed...

5. Freedom to choose your doctors

The Senate bill requires that Americans buying through the exchanges — and as we’ve seen, that will soon be most Americans — must get their care through something called “medical home.” Medical home is similar to an HMO. You’re assigned a primary care doctor, and the doctor controls your access to specialists. The primary care physicians will decide which services, like MRIs and other diagnostic scans, are best for you, and will decide when you really need to see a cardiologists or orthopedists. Under the proposals, the gatekeepers would theoretically guide patients to tests and treatments that have proved most cost-effective. The danger is that doctors will be financially rewarded for denying care, as were HMO physicians more than a decade ago. It was consumer outrage over despotic gatekeepers that made the HMOs so unpopular, and killed what was billed as the solution to America’s health-care cost explosion. [Me: Illustrating the importance of civil law in keeping insurance companies honest.]

Obamacare would remake the entire health care system, bust the budgets of both government and consumers, and tilt the playing field toward an eventual single payer plan when the regulations and “competition” by the “public option” finally destroys the private system.  We need reform, but not this plan.  In this case the “cure” is worse than the disease.
0
Print
Email
Prev Article
Next Article