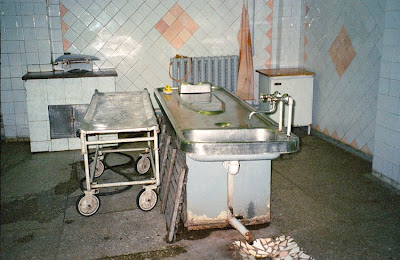 We are creating a world of  “outsourced ethics” (to quote my pal William Hurlbut), in which the rich West engages in or winks at corrupt or unethical behavior in poor countries toward the end of exploiting human bodies—living and dead—for profit.  Examples discussed here at SHS previously are organ buying in India, Philippines, and China, paying women to get pregnant and abort in the Ukraine for fetal stem cells, unethical medical experimentation on poor women in Africa, etc.  Now a Spiegel report details a thriving market in body parts imported to the West from Ukraine.  From the story:

The German company Tutogen’s business in body parts is as secretive as it is lucrative. It extracts bones from corpses in Ukraine to manufacture medical products, as part of a global market worth billions that is centered in the United States...The incident in the Ukrainian capital is part of the secretive daily routine of a little-known but highly lucrative branch of the medical industry, in which companies use corpses to make medical spare parts. In doing so, they reuse almost everything the human body has to offer: bones, cartilage, tendons, muscle fascia, skin, corneas, pericardial sacs and heart valves. In the jargon of the profession, all of this is referred to as tissue....

There’s big money to be made in dead bodies:

According to the American Academy of Orthopedic Surgeons, more than a million bone parts are used in transplants every year. In no other country is it possible to make so much money with body parts. If a body were disassembled into its individual parts, then processed and sold, the total proceeds could amount to $250,000 (€176,000). For a single corpse! The US tissue industry generates total revenues of about $1 billion a year, says journalist Martina Keller, a co-author of this article and the author of the German book, “Cannibalized: The Human Corpse as a Resource.”

Of course, it is all ethical if it is truly consensual.  But this is big business and in some places, the legal niceties are just so much wallpaper:

The Ukrainian tissue transplant act includes a provision stating that family members must consent to tissue donation if the deceased did not already do so while still alive. However, there are indications that this was often not the case. Ukrainian authorities in Krivoy Rog and several other cities are conducting investigations into suspected illegal tissue and organ harvesting.

The case of the deceased father of Kiev resident Lena Krat, for example, was examined in connection with an investigation identified by the file number 50-3793, begun on Jan. 4, 2005. The investigation included all incidents that took place between May and September 2004. The names of 10 deceased persons are listed in the files. Their family members stated that they “did not consent to the removal of anatomical material.” Despite the evidence, the Kiev district attorney’s office closed the proceedings in July 2005, “for lack of a statutory offense.” Curiously, the document states, as grounds for dropping the case, that the Bioimplant employees had not violated the transplant act, because they had not transplanted material from corpses, but had merely removed it so that it could be processed into “bio-implants.” As a result of this legal twist, the recycling of corpses has been allowed to continue to this day.

Biological colonialism is a logical consequence of discarding human exceptionalism. Once being human ceases to matter morally and objectively, what is to stop the powerful and the rich from instrumentalizing the weak, the desperate, and the dead for their own needs and uses? With big money changing hands, corruption and criminality soon follow.  And from there, self-justification by the customer and his enablers for exploiting others—such as the laugh romp, Larry’s Kidney.
0
Print
Email
Prev Article
Next Article