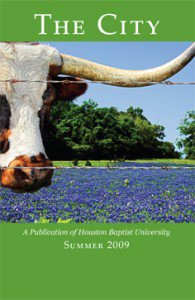 Houston Baptist University publishes this wonderful new periodical called The CIty . (Full disclosure: I am one of its advisory editors).

In the Winter 2008 issue, Matthew Lee Anderson , published an insightful essay, “The New Evangelical Scandal.” My good friend, Professor John Mark Reynolds (of Biola University), and I were invited to write responses. They have just been published in the recently released Summer 2009 issue . My article, entitled “Evangelical Catholicity,” is accessible online here . (You can find Professor Reynold’s piece online here ). The following is an excerpt from my article:

I need to make a confession. I am not entirely comfortable offering an assessment of an article with the title, “The New Evangelical Scandal.” It is not that I do not think I am qualified for the task. Rather, as the former president of the Evangelical Theological Society who resigned his post within days after returning to the Catholic Church of his youth, I suspect that some readers will think that I am more adept at scandalizing Evangelicals than providing them with any insights about Matthew Lee Anderson’s well-crafted essay. But that is a false dilemma. I am fully capable of accomplishing both in one sitting.

Nevertheless, I write with deep affection and appreciation for my Evangelical friends and what they have taught me over the years. I am convinced that if not for the Holy Spirit working through the many gifted and devoted Christian scholars and teachers in Evangelical Protestantism, some of whom I have had the privilege to know, love, and study under, my present faith would be significantly diminished. Their tenacious defense and practice of Christian orthodoxy is what has sustained and nourished so many of us who have found our way back to the Church of our youth. Thus, for me, as well as for many other Catholics, a diminished or theologically heterodox Evangelicalism that strikes at the movement’s catholicity is bad for Christianity. For it is that catholicity that kept many of us spiritually afloat when we—in our desire to follow Jesus—drifted from Rome but not from Christ.

What I mean by Evangelicalism’s catholicity is its traditional allegiance to classical Christian orthodoxy and all that it entails about the good, the true, and the beautiful, including its commitment to the authority of Scripture and the veracity and normativity of the Catholic creeds. This is why if Evangelicalism is to survive, it has to grow up and not “emerge.” It needs the wisdom of David Wells’s The Courage to Be Protestant rather than the beatnik aphorisms of Donald Miller’s Oprah-fied narrative, Blue Like Jazz . It needs more Augustine and less Pelagius, and a theological and pastoral leadership that understands that it is not above its pay grade to suggest to its people that a purpose-driven life requires a purpose-driven death . . . .

According to Anderson, the young evangelicals are questioners: “For previous generations of evangelicals, questioning one’s faith was anathema. Now, it is a rite of passage, necessary for maturation and perfectly acceptable to God. It is, after all, part of the journey toward authentic faith.” As a philosophy professor, I love questions and questioners. I encourage my students to think critically about their faith. Jesus himself was the master questioner, always asking just the right question to the right people at just the right time. But the young evangelicals are selective, self-serving, questioners, just like their Baby Boomer grandparents. They have bumper stickers on their car saying “Keep your rosaries off my ovaries” and “Question Authority,” while not realizing that the truth of the first requires that you not question the driver’s authority. So, what the bumper should have is just one sticker that asserts, “Question everyone’s authority except mine.”
You can read the whole thing here . And you can access Professor Reynolds’ essay here .