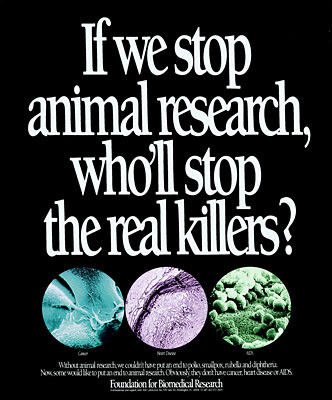 Another example of the need for—and potential human benefit to be derived from—research on animals, was reported this week. Rats, whose spinal cords had been severed, were able to walk again with the use of an experimental medical procedure. From the story:

Consistent electrical stimulation and drugs enabled the rats to walk on their hind legs on a treadmill — bearing the full weight of the body — within a week of being paralysed. With the addition of physical therapy, the rodents were able after several weeks to walk and run without stumbling for up to 30 minutes, reported the study, published in the journal Nature Neuroscience. Paralysed rats whose spinal cords had been severed from their brains were made to run again using a technique that scientists say can work for people, according to a study released Sunday.

Not only that, but some really new and important biological knowledge seems to have been gained that will undoubtedly affect the thinking of other scientists:

Remarkably, the animals could adjust their movements in response to stimuli despite the lack of signals to and from the brain: when the treadmill was reversed, for example, the rats walked backwards. “This means that the spinal network is almost capable of cognitive processing,” explained Gregoire Courtine, a professor at Zurich University. “It can understand that the external world is changing, and interpret this information to modify the way it activates muscle,” he told AFP by phone