As I apologized to Joe yesterday for being the hard-hearted one in his band of “evangelical” bloggers here at First Things, let me also apologize to you the readers of this blog, and to our hosts at First Things, for the trouble which, of course, follows me around the Blogosphere — particularly the hard feelings of some who find me to be a “rabid anti-catholic”, and who will undoubtedly try to position what I say and do around that.

I’ll hold that out as an open point of discussion. 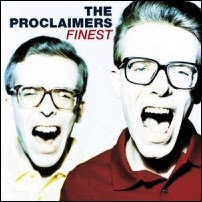 I’m back this morning to sort of jump off from where I stopped yesterday, citing a 20-year-old pop song to underscore the excessive complexity of the label “evangelical” when it comes to the point of who we really think we are — we “evangelicals” (or more traditionally, just “???????????”, as they were first called in Antioch — just “Christians”) tend to make it a lot more complicated than it has to be.

Yesterday I was misinterpreted (honestly and not for some nefarious reason) as saying that somehow we should change our name from “evangelicals” to “the proclaimers”. That wasn’t really my point — changing the label. My point was that our mission — or rather, to use a more traditional term, our commission — is not as complicated as being an “evangelical” tends to make it. I think our commission is a lot like the way the Reid brothers approached their song about being a man who falls down at someone’s door: we should declare it somewhat joyously and somewhat recklessly, and if we fall down, well you know we’re gonna be the men (and women) who fall down next to the Gospel. Our job is to bring the Gospel to people, and to fall into the Gospel when we are in trouble.

What I think gets lost very quickly here is the Gospel — the idea that men have an urgent need for God and that God wants to save them, and is in fact saving them, and in a very historical sense has already done everything necessary to save them. But all manner of things will fill up that need for God because we like to invent our own solutions. But the Gospel says this explicitly: you personally are a screw-up, and even if you think you’re doing something great and morally superior, you’re probably screwing that up, too. You are so screwed up, in fact, that you cannot unscrew yourself: you personally need someone to save you from your own bad ideas about what’s right.

And just so you don’t feel singled out, I am probably worse off than you are (just ask Francis Beckwith), so the savior you need is the savior I need. The good fortune of it is that the savior who can save a dolt like me is great enough to save someone like you who may not be a rabid anti-catholic: you may only be a Catholic, or better yet — a Baptist.

And I say that to say this today: the problem with “evangelicalism” is that we forget that the Gospel is the solution and not just a suggestion. Take yesterday for example: someone left a comment here at Evangel who began a totally right-minded rant about the vile practice of abortion, and before he was done he was also denouncing nationalized health care. He said, in words to this effect, that the government should end the practice of abortion, but that the practice of socialized health care was “statist” and therefore wrong.

Does anyone see anything in that reasoning which doesn’t quite work out overall? See: I would agree that, on the one hand, it is “statist” (and I would translate “statist” as “idolatrous”, just to make sure I am sufficiently-rabid today) to nationalize health care: to make the state the arbiter and the provider of all medical care is to make the state into a kind of savior. It’s bad politically, of course, but mostly it’s bad spiritually to make government into a savior.

And I think we would all agree that this is bad.

And we would all also agree that abortion is itself very bad — a pandemic of cruelty and violence which calls itself “compassion” because it allegedly mitigates pain and poverty. But here’s the thing: in the case of abortion, we want the government to solve the problem and be our savior from this other form of idolatry — the idolatry of infanticide for the sake of our comfort and ease.

That’s not what you were expecting, is it? To say that somehow our zeal for innocent human life may actually be a kind of idolatry? Well, when we expect the government to save us rather than the Gospel, it seems to be a very fair question: who is actually in charge around here, and what’s His solution?

To avoid being misinterpreted here, I’m going to paraphrase John Piper: it would be a good thing if abortion stopped because it was illegal; but it will be a great thing when the Gospel ends abortion forever. That is: if God is gracious and he gives us the political power to stop abortion in our country, amen and maranatha. But stopping abortion is not the main end of the Christian life: saving men who deserve eternal condemnation by declaring to them the forgiveness of sins in Christ is the main end of the Christian life. That is our Great Commission. This is why we must be Proclaimers.

Let’s face it: “evangelicals” have frankly lost sight of this in the English-speaking church. We don’t frame abortion as something which really will only be solved by the Gospel: we frame it as something which the Supreme Court must save us from.

I have more to say about that, but I don’t want to take up your whole day. I’ll pick this up later.