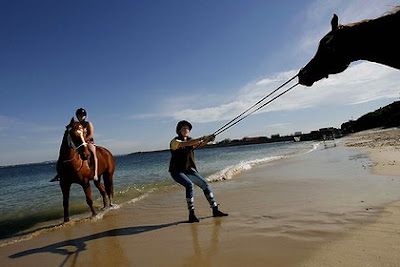 There is an old saying: You can drag a horse to water but you can’t make him drink.  I think this aphorism is relevant to Obamacare’s prescription that each of us be required legally to buy health insurance—and perhaps even face jail—for refusing to do so and pay the resulting fine.  But some are asking: Where, in the U.S. Constitution, can we be forced to buy a service that we don’t want to buy?

CNS News asked Senator Patrick Leahy this reasonable question, and disturbingly, he didn’t have an answer. From the interview:

CNSNews.com: Where, in your opinion, does the Constitution give specific authority for Congress to give an individual mandate for health insurance?

Sen. Leahy: We have plenty of authority. Are you saying there is no authority?

Sen. Leahy: Why would you say there is no authority? I mean, there’s no question there’s authority. Nobody questions that.

That’s not true. A lot of people are questioning that.  Nor does categorically asserting, “We have plenty of authority,” make it true.  The interview continued:

Sen. Leahy: Where do we have the authority to set speed limits on an interstate highway? The federal government does that on federal highways.

Inapt. As CNS pointed out in its story on the interview, the Feds control state behavior by threatening to withhold highway funds for non compliance. Moreover, setting a speed limit on the Interstate Highway System isn’t the same thing as forcing people to buy insurance.  Nobody is forced to drive on the Interstates.

Mandatory universal purchase of insurance is a new concept. Isn’t it up to our fearless leaders to figure out whether the Feds have the constitutional power to do it?   The fact that Leahy apparently hasn’t thought about the issue—and worse, doesn’t appear to care—illustrates an unseemly arrogance of power that ill serves the country.
0
Print
Email
Prev Article
Next Article