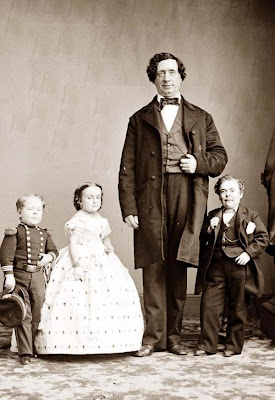 In the past few months, I have come to think that Obamacare and the obsession with cost containment is driving us crazy. Now, after reading Slate writer Daniel Engber’s call for a war on shortness to be fought alongside the war on obesity, I know it is.  Writing in the New York Times Magazine,  Engber asks:

Shouldn’t making Americans taller be one of the goals of health care reform?

It seems tall people are healthier, he writes, pointing to our supposedly very healthy president who is 6 feet 2 and weighs only 175 pounds.  (Perhaps then, we should all take up smoking, since our healthy president does that too.)  But short people don’t tend to live as long and have more serious health concerns, and thus, the short sector tends to be more expensive for which to care— just like the obese.  If we could just get people to grow taller, it would save big money on health care!

At first I thought Engber was being tongue in cheek. But no. From the article:

You’re excused for scoffing. You probably think of weight as a problem we can fix, while height seems beyond our control. We could try to make people thin by taxing junk food or by raising their insurance premiums unless they go on a diet. But what kind of policy could make someone taller?...

Early-life experiences play an important role in the development and consequences of body size. Exposure to malnutrition, infectious disease, chronic stress and poverty stunta child’s development and seem to explain many of the long-term problems associated with short stature. Environmental factors may promote obesity, too: lack of breast-feeding, bad nutrition, chronic stress and poverty have all been associated with early weight gain and a higher risk of health problems down the road.

A range of sensible interventions could address both problems at once. To win a war on shortness, we might promote the consumption of fruits, vegetables and other foods that are low in calories and high in micronutrients. Or we could invest in education as a means of alleviating poverty and environmental stress. Better access to doctors for children and their parents would improve prenatal and postnatal care and stave off the stunting effects of childhood disease.

I have an even better idea? Leave us alone!

On the other hand, what about global warming?  We should want more short people.  Yea, that’s the ticket: Their smaller lungs exhale less carbon dioxide. They can be comfortable in smaller, more efficient cars, and we could squeeze more of the diminutive onto planes, thereby helping to save the planet.  Short people eat less food, and drink less water—more for the salmon that way.  We would need to grow less cotton for clothes, less wool for coats: Think of the environmental possibilities!

Or better yet, leave us alone.
0
Print
Email
Prev Article
Next Article