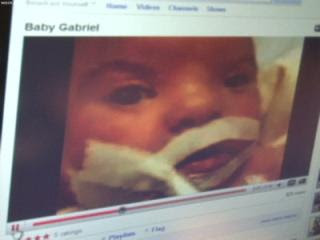 An attorney affiliated with the Alliance Defense Fund has used litigation to stop a Tennessee hospital from unilaterally withdrawing life support from an infant.  From the story:

Children’s Hospital said it would continue caring for 9-month-old Gabriel Palmer from Sweetwater. The attorney for Catherine Palmer, the baby’s mother, said Gabriel was born prematurely. He was diagnosed with a rare disease that family members said is affecting the growth of his wind pipe.

In court papers filed Monday, the family’s attorney said Children’s considered Gabriel’s care futile.  He said an agreement has been made with the hospital and believes his client’s complaint will eventually be dropped. “I filed a complaint today seeking a temporary restraining order to make sure no care is withdrawn from the child,” said Knoxville attorney John Threadgill, who represents the Palmer family. In the complaint, Threadgill claims a Children’s official told Gabriel’s mother “ETCH was going to cease Gabriel’s respirator, medications, pulse oximeter and milk feeding because they considered his care futile.” The complaint goes on to read that the mother said the staff member told her that a committee of doctors “would meet soon to make the formal decision of withdrawal of treatment, but that the decision was a foregone conclusion.”

The complaint states “Gabriel Palmer’s condition is stable.  He is not dying, and he could live for many years.” Threadgill pulled the restraining order request from Monday’s court docket after attending a meeting a ETCH. “There was an ethics committee meeting of the hospital where they were to decide the future care of the child,” Threadgill said.  “The decision was made that the child will remain a patient at least for now at the Children’s Hospital.”

That’s how it is done!

This is why laws that give ethics committees the power to refuse wanted life-sustaining treatment—like the one in Texas—must be fought tooth and tong. If extending life, when that is what the patient or parent wants, ceases to be a fundamental purpose of medicine, if the values of doctors or an ethics committee can trump those of patients and families, none of us is safe.
0
Print
Email
Prev Article
Next Article