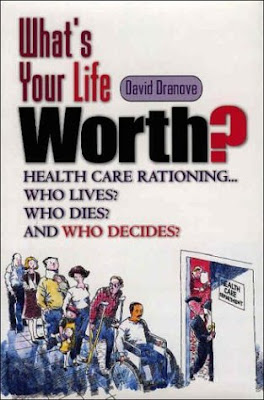 Obamacare pushers have mounted the most dishonest political campaign I think I have ever seen. They say that we will insure 30 million more people—but for less money—which is impossible.  They claimed abortion wouldn’t be funded, but that lie is now fully exposed as both the House and Senate versions would do just that. They say that there will be no rationing—and yet, attempts to amend the bill to proscribe health care rationing have all been rejected.

But the push for rationing is going full steam ahead among Obamacare’s allies.  Latest example, 60 Minutes, always as reliable an ally of this administration as it was an implacable enemy of the last, recently broadcast a story explicitly pushing rationing by focusing on the worst case scenarios and not presenting any opposing views.  From the story:

Patients, with their families’ support, want to cling to life, and it is often easier to hope for a medical miracle than to discuss how they want to die.  Charlie Haggart is 68 years old and suffering from liver and kidney failure...At a meeting with Haggart’s family and his doctors, Dr. Byock raised the awkward question of what should be done if he got worse and his heart or lungs were to give out.

He said that all of the available data showed that CPR very rarely works on someone in Haggart’s condition, and that it could lead to a drawn out death in the ICU.  “Either way you decide, we will honor your choice, and that’s the truth,” Byock reassured Haggart. “Should we do CPR if your heart were to suddenly stop?”  “Yes,” he replied. “You’d be okay with being in the ICU again?” Byock asked.  “Yes,” Haggart said.  “I know it’s an awkward conversation,” Byock said.  “It beats second place,” Haggart joked, laughing.

“You don’t think it makes any sense?” Kroft asked the doctor.  “It wouldn’t be my choice. It’s not what I advise people. At the present time, it’s their right to request it. And Medicare pays for it,” Byock said.

At the present time.  Byock—a friend of mine who I respect greatly as one of the country’s leading hospice physicians—believes that the choice he assured Mr. Haggert was available, shouldn’t be.

By law, Medicare cannot reject any treatment based upon cost. It will pay $55,000 for patients with advanced breast cancer to receive the chemotherapy drug Avastin, even though it extends life only an average of a month and a half; it will pay $40,000 for a 93-year-old man with terminal cancer to get a surgically implanted defibrillator if he happens to have heart problems too.  “I think you cannot make these decisions on a case-by-case basis,” Byock said. “It would be much easier for us to say ‘We simply do not put defibrillators into people in this condition.’ Meaning your age, your functional status, the ability to make full benefit of the defibrillator.  Now that’s going to outrage a lot of people.”

The defibrillator question is a classic misdirection. I mean, how many 93 year-old patients near death from cancer receive that level of intervention?  More realistically, note that  60 Minutes apparently thinks the extra six weeks of life provided by the chemo shouldn’t be provided—just like Ontario, Canada’s rationing board decided with regard to colon cancer earlier this year.  We do not want such centralized planning in this country.  As to the issue of choice, raised by Byock, once we stop making these decisions on a case by case basis, medicine becomes a check the boxes technocracy.  And I say this agreeing with Byock as to what I would not want (I think, we never know until we are there) if I were in a terminal situation.

And here’s a problem not specifically addressed by the 60 Minutes piece—many of the ICU admissions being complained about could go either way.  From an article in Bio Medicine:

“Even with excellent prediction models, we will still admit patients at high risk of dying because they also have a good chance of survival,” says Dr. Angus. “There will still be a large, irreducible number of patients who die in intensive care. This means we have to carefully consider providing and promoting good end-of-life care in the ICU.

In other words, if we bluntly bar certain categories of patients from the ICU, it means by definition that people who could have gone on, won’t. Death panels anyone?

This is my primary reason for opposing Obamacare. It will lead to explicit medical rationing.  Or to put my position into a soundbite: Education to help people make better end of life decisions, definitely.  Coersion either through futile care protocols or explilcit rationing, never.  That establishes a duty to die.
0
Print
Email
Prev Article
Next Article