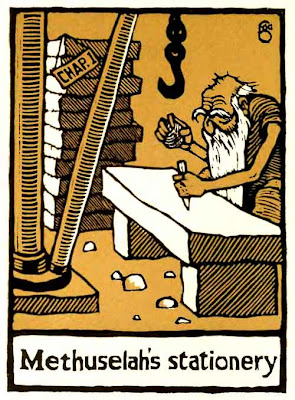 Reason’s Ron Bailey is sure a sucker for futurism and transhumanism.  If there is a big conference about how we can all live forever, count on him to be there breathlessly reporting, which is ironic and paradoxical: Bailey usually claims the mantle of rationality and most of this stuff is pure pie in the sky.

Moreover, transhumanism and immortalism—the two are connected but different—are both forms of materialistic religion, in that they promote an eschatology similar to what most religions offer—eternal life. Only rather then a promised “New Jerusalem” where God will dry every tear and “death will be no more,” or Nirvana, a state of becoming one with all things, or repeated reincarnation, transhumanists and immortalists really believe they can have eternal life in their existing bodies right here on terra firma.

Baily clearly yearns for this to be real, and so he attended another conference and produced another extended piece. From Bailey’s article, “The Methuselah Manifesto”:

If you’re under age 30, it is likely that you will be able to live as long as you want. That is, barring accidents and wars, you have centuries of healthy life ahead of you. So the participants in the Longevity Summit convened in Manhattan Beach, California, contend. Over the weekend Maximum Life Foundation president David Kekich gathered a group of scientists, entrepreneurs, and visionaries to meet for three days with the goal of developing a scientific and business strategy to make extreme human life extension a real possibility within a couple of decades. Kekich dubbed the effort the Manhattan Beach Project.

How will this amazing feat be accomplished?

Anti-aging research is a rich and varied territory right now. Researchers are finally beginning to get a handle on the actual causes of aging. With this increased scientific understanding, some researchers now believe they are on the way to figuring out how to stop it, and—eventually—how to reverse it. University of California, Riverside biochemist Stephen Spindler reported on his research seeking caloric restriction mimetics. It is well established that restricting many mammal species to about two-thirds of what they would ordinarily eat extends their healthy lifespans. For example, calorie restricted mice live up to 50 percent longer, and experience less heart disease and cancer than those who eat as much as they want. Spindler is now screening a variety of compounds including pharmaceuticals to see if they mimic the effects of calorie restriction in mice.

Some might not call semi-starvation living, but beyond that, there may be a hitch. Apparently, as reported here, a medical study unexpectedly showed that slightly chubby people live longer than thin or normal weighted people.  Then, there’s a compound apparently to be extracted from fruit flies—does PETA know?—selected for greater age. Some thought the key to immortality would be human cloning. But so far, that hasn’t worked out. And what would any transhumanist immortality confab be without Aubrey de Gray preaching from the pulpit?

Theoretical biogerontologist, Aubrey de Grey, the founder of the SENS Foundation and the Methuselah Foundation, is the energizer bunny of anti-aging scientific research and advocacy. SENS stands for Strategies for Engineered Negligible Senescence, which De Grey defines as “an integrated set of medical techniques designed to restore youthful molecular and cellular structure to aged tissues and organs.” De Grey focused on one proposed anti-aging solution which is to install mitochondrial genes in the nuclei of cells.

Y’all can read the rest for yourselves. But here’s the thing: Death is terrible and terrifying, but we need it. Knowing we will be dead far longer than we were ever alive—one spiritual teacher called our lives “a parenthesis in eternity”—helps us appreciate the sheer importance of life.  On a macro level, it allows society to be dynamic by eventually removing the old from among us so that there is room for the new.  Can you imagine how stilted and moribund society could become if people lived five hundred years?  Besides, if we live forever, how will we ever pay for Obamacare?

Sorry, none of us have any real choice in the matter.  One hundred years from now, everyone at that conference—as well as your humble correspondent—will be caught up in whatever—if anything—comes next.  Better, I think, to focus our resources on helping the currently sick and destitute not die young from uncured diseases like malaria or the effects of bad drinking water, than to waste any of our resources on a  Quixotic quest to allow the already comfortable and healthy live forever.
0
Print
Email
Prev Article
Next Article