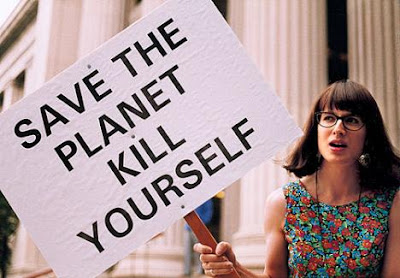 The global warming agenda, if enacted, will lead to less freedom, lower prosperity, and higher taxes (as in the EPA taking “command and control”  over the economy).  But it could also lead to tyranny and profound anti humanism. Example: China is extolling its population control despotism, as if the country should receive carbon credits for female infanticide and forced abortion.  From a story in China Daily:

Population and climate change are intertwined but the population issue has remained a blind spot when countries discuss ways to mitigate climate change and slow down global warming, according to Zhao Baige, vice-minister of National Population and Family Planning Commission of China (NPFPC) . “Dealing with climate change is not simply an issue of CO2 emission reduction but a comprehensive challenge involving political, economic, social, cultural and ecological issues, and the population concern fits right into the picture,” said Zhao, who is a member of the Chinese government delegation.

Alas, some notables in the West have called for draconian population controls here. Hey, think about the carbon reduction potential of mass euthanasia of the unproductive: Why, killing become a whole new Green industry!
0
Print
Email
Prev Article
Next Article