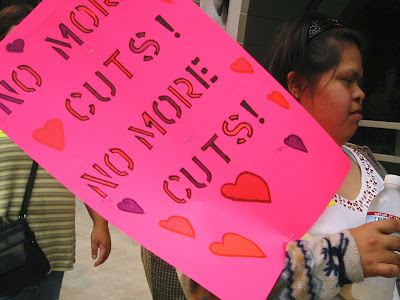 I have had great sympathy with the problem Obamacare has posed for people with disabilities. On one hand, many are terribly under-served by the health care system. On the other hand, I believe Obamacare will lead to explicit rationing of expensive patients, which will one day include people with disabilities. It could also one day support assisted suicide, as I reported here.

But now, I don’t see how the disabilities community can countenance this any longer. Democrats  have supported cutting $43 billion from home health care as a way to help pay the huge Obamacare tab.  From the story:

By a vote of 53 to 41, the Senate on Saturday rejected a Republican effort to block cutbacks in payments to home health agencies that provide nursing care and therapy to homebound Medicare beneficiaries. Republicans voted against the cuts, saying they would hurt some of the nation’s most vulnerable citizens. Most Democrats supported the cutbacks, saying they would eliminate waste and inefficiency in home care. The Democrats’ health care bill would reduce projected Medicare spending on home care by $43 billion, or 13 percent, over the next 10 years. The savings would help offset the cost of subsidizing coverage for the uninsured.

This and the projected $400 billion in cuts to be made to Medicare prove that Obamacare is to be financed out of the hides, perhaps literally, of our most vulnerable citizens, most particularly people with disabilities and the eldelry. I don’t see any other way of looking at it.

Oh, right: Afterwards the senate passed a measure—as it did after refusing to delete the wider Medicare—opposing all cuts in home health care. Sorry, you can’t cut $43 billion and also maintain the same quality of services. Either the services will suffer or the cuts won’t be made, meaning this is all a sham to make it fit the CBO cost workup.  I hope it is the latter. Either way, Obamacare may be the most dishonest bill in the history of the United States.
0
Print
Email
Prev Article
Next Article