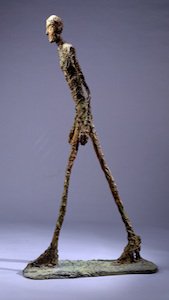 When Sotheby’s put Swiss sculpter Alberto Giacometti’s “Walking Man I” up for auction, it was expected to bring between $19.2 million and $28.8 million. Instead, the piece was sold to an unidentified buyer for a record-setting total of $104.3 million.

According to the Wall Street Journal :


Giacometti, a Swiss modern master known for his haunting sculptures of blank-face Everymen, cast the work 50 years ago as part of a commission to plant several of his bronze figures outside Chase Manhattan Bank in New York City’s financial district. The artist famously struggled with the project and eventually abandoned the commission. But he later cast stand-alone versions of some of the planned sculptures, including “Walking Man I.”