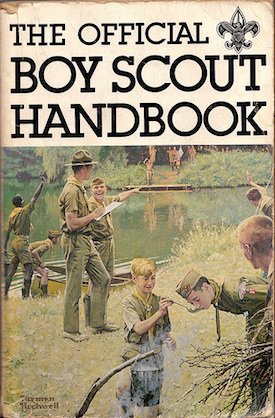 Today marks the centennial anniversary of the Boy Scouts of America, an offshoot of a movement which began in Britain under the leadership of General Robert Baden-Powell and was brought to America by publisher William Boyce.

It’s fitting that a publisher established the institution since it produced what is arguably the most influential conservative book ever published in America.

Of course, the Boy Scout Handbook is rarely regarded as being a conservative book. That probably accounts for why the Handbook has managed to continuously stay in print since 1910. If it were widely known how masterly the the book inculcates conservative values, it would, like Socrates, be charged with corrupting the nation’s youth.

Cultural critic Paul Fussell once wrote that the Boy Scout Handbook is “among the very few remaining popular repositories of something like classical ethics, deriving from Aristotle and Cicero.” Indeed, it is literally a vade mecum on virtue ethics. Consider, for example, the Scout oath:


On my honor I will do my best
To do my duty to God and my country
and to obey the Scout Law;
To help other people at all times;
To keep myself physically strong,
mentally awake, and morally straight.


And then there is the Scout Motto (“Be Prepared”) and the 12 point Scout Law which includes the politically incorrect admonition to be reverent: “A Scout is reverent toward God. He is faithful in his religious duties. He respects the beliefs of others.”

Such an earnest and irony-free worldview is naturally antithetical to the South Park-style mock-the-world moronity that pervades the culture. In a society that combines libertarian Me-ism with a liberal nanny state that suckles “men without chests,” it is not surprising that the ranks of Boy Scouts are dwindling (Scouting is down 11 percent over the last decade). But we should be cheerful that an institution where self-sacrifice and manly virtues are encouraged manages to survive at all.

Fortunately, Scouts and their handbook remain what good conservative institutions should be: deeply, irredeemably, and unapologetically anachronistic.