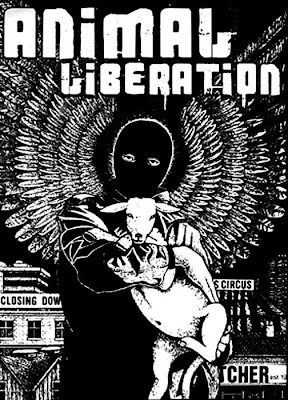 Animal rights activists would never stop screaming if the actions they take were directed against them.  They demand the right to free speech—which some activists expand beyond recognition to include threats, intimidation, and even bombings—but have little problem with denying it to those with whom they disagree.  Thus PETA refuses to condemn ALF, even when it plants pipe bombs under animal researchers’ cars—equating the terrorists with the Underground Railroad and the French Resistance on its Web site. This is particularly true of the “direct action” types, the ALFs, SHACs, who are closely allied with anarchists.  I call this the “tear down” arm of the animal rights movement, because it certainly is not interested in building up.

A good illustration of the double standard happened here in San Francisco when an ex vegan was pied at an anarchist book store reading of her book.  From the story:

An ex-vegan who was hit with chili pepper-laced pies at an anarchist event in San Francisco said Tuesday that her assailants were cowards who should direct their herbivorous rage at the powerful - not at a fellow radical for writing a book denouncing animal-free diets. Lierre Keith, a 45-year-old Arcata resident, was attacked at 2:15 p.m. Saturday at the 15th annual Bay Area Anarchist Book Fair while discussing her 2009 book, “The Vegetarian Myth.” A 20-year vegan, Keith now argues that the diet is unhealthy and that agriculture is destroying the world. As Keith stood at a lectern at the Hall of Flowers in Golden Gate Park, three people in masks and black hooded sweatshirts ran from backstage, shouted, “Go vegan!” and threw pies in her face. While they fled, some in the audience cheered or handed out leaflets.

That was an assault and battery.  Alas, being victimized did not teach Keith that it is wrong to engage in lawlessness against people with whom one disagrees:

Keith said her values are similar in most ways to those of her attackers. She believes in militant action, even property destruction, if it can lead to change. In her book, she said, she railed against factory farming and promoted the restoration of prairies and forests. “It’s insane. My entire book is about how the world is being destroyed,” Keith said. She said the first pie hit her just after she uttered the sentence, “You should not eat factory-farmed meat.” Among those rejoicing in the pie attack was the North American Animal Liberation Press Office, which often prints communiques from activists taking credit for attacks on animal researchers. The group said Keith was wrong about veganism, referred to her as an “animal holocaust denier,” and scolded her for calling the “agents of state oppression” - the police.

This is as much the face of animal rights as pretty models posing nude to protest fur.  Rather than being distinct, I am convinced that the movement is one organism, like an octopus, with PETA’s edginess one arm, ALF’s violence another arm, and HSUS’s lawsuits and legitimate political advocacy, a third arm, etc.. That point aside, Keith’s nihilism is so thick that even after becoming a victim, she doesn’t have it in her to condemn lawless tactics against people based on differences of opinion.  She just wants these tactics directed at someone else.  Typical.
0
Print
Email
Prev Article
Next Article