The distinctive look of an Early American church is unmistakable. It might be Boston’s Old North Church or King’s Chapel or, as visitors to Manhattan’s Financial District may find, New York’s John Street Church. John Street’s congregation, the oldest Methodist congregation in the United States, held its first worship service in 1766 and dedicated its original church two years later. The current church, in characteristic Early American style, was erected in 1841. 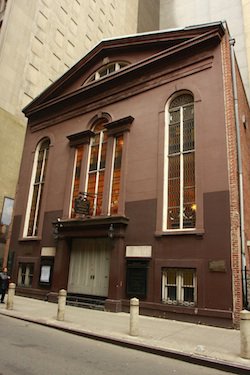 John Street’s two-tiered central space—with its bare, white walls and pillars and its high-backed pews—gives visitors the undeniable impression that simplicity was enshrined as a virtue in the cultural aesthetic of early America. The precincts around Wall Street are eerily quiet on a Sunday; all the more appropriate, then, that this time-honored church still lights the gas lamps on its façade as a beacon, as it must have done when the streets of Lower Manhattan were paved with cobblestones, and trees, not 50-story office towers, punctuated the skyline.

Clad in a white alb and purple stole, John Street’s young pastor, the Rev. Jason Radmacher, led forty or so attendees in a traditional Methodist service, with several iterations of gospel readings interposed with hymns. In his sermon, the Rev. Radmacher initially focused on straightforward exegesis, providing reflections on several passages. During one of them—Jesus’ raising of Lazarus—Radmacher noted how threatening Jesus’ ministry was to the Pharisees and priests: “If we allow him to go on like this, soon everyone will believe in him.”

The pastor then moved directly to the next episode in the Gospel of St. John—Jesus’ dinner with Martha and Mary at Lazarus’ home in Bethany. Such is fodder for many sermons, but this Sunday the Rev. Radmacher chose to focus in on Jesus’ assertion, “You will always have the poor among you, but you will not always have me.” The theme of service to the poor characterized the rest of the sermon, and the pastor exhorted his congregants to embrace their poor neighbors, who are so often on the receiving end of “the back of society’s hand.” One of the many spiritual benefits of serving the poor, he suggested, is humility. Calling to mind an example from the history of Methodism, Radmacher spoke of a time when John Wesley exhorted a supplicant to greater humility after she fell victim to pride by looking down on the unrefined, lower-class Methodists of her day.

At the sermon’s conclusion, the pastor began the Lord’s Prayer, followed by general intercessions from the congregation. Several members raised their hands and spoke aloud the names of friends and relatives in need of prayers. The Rev. Radmacher dutifully inscribed the names on the pad he carried as he walked down from the pulpit toward the pews. Clearly concerned with Methodist traditions, Radmacher was deliberate and clear throughout the service, retaining touches of more ancient Christian liturgies, such as the congregation’s response of “Thanks be to God” to the pastor’s “The Word of the Lord” and the now rarely heard “Amen and amen.”

After a collection and an ambulatory exchange of peace, the service closed with a classic Wesleyan hymn, “Thou Hidden Source of Calm Repose.” Indeed, the hymn’s verse was a strikingly fitting encapsulation of John Street Church—a hidden source of calm repose from the bustling of the world’s financial center and from the stress of life, even on a Sunday.