Inauguration Day 2009 was not only a historic day for our nation, it was also a turning point for the antiwar movement: It was the day Democrats stopped opposing the wars in Iraq and Afghanistan.

At least that’s the conclusion that can be drawn from a new a sociology paper on the partisan dynamics affecting the antiwar movement. 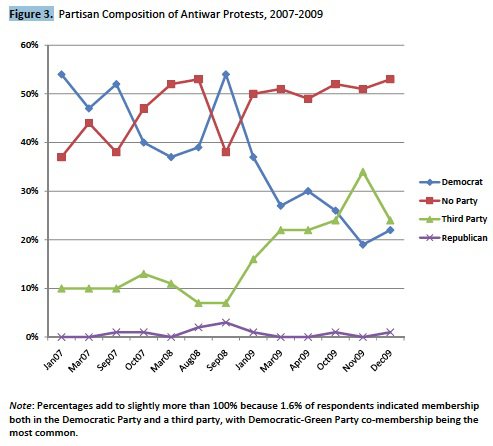 My collaborator, Michael Heaney, and I have a new working paper called “The Partisan Dynamics of Contention: Demobilization of the Antiwar Movement in the United States, 2007-2009.” The key argument is that the decline of the antiwar movement can be attributed, in part, to the fact that Democrats have stopped using the peace movement as a platform for anti-Bush sentiment. In other words, at its peak, the ranks of the antiwar movement were swelled by partisans. Once Obama won the presidency, and other issues emerged, the movement shrank when Democrats stopped showing up. The remaining protesters were more likely to be non-partisan or third party, and these non-Democrats were more likely to disapprove of Obama’s management of Iraq and Afghanistan. When Democrats gained power, the movement converged on a core of peace activists who were not strongly identified with the Democratic party.


You can download a PDF of the paper here .
0
Print
Email
Prev Article
Next Article