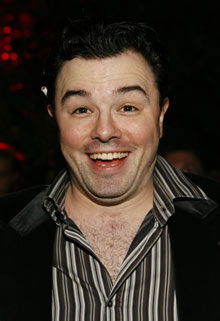 A few weeks ago, I castigated the creators of the mega crude Family Guy for using the V-word to make fun of Terri Schiavo.  Using the word “vegetable” to describe anything but carrots or squash—in other words, to describe any human being—is hateful and intended to dehumanize them, strip them of their intrinsic dignity, and in some hands, open them up for instrumental use as a mere natural resource—just as we did to American slaves.

Last night, Family Guy’s creator, Seth MacFarlane was on Larry King and the program allowed Terri’s brother, Bobby Schindler, to send in a question.  From the transcript:

KING: Seth MacFarlane’s our guest. His show provoked an outcry with a musical about the late Terri Schiavo. We reached out to them today and Terri’s brother Bobby had this question for you. “How do you justify using the term vegetable to describe any human being when its only intention is to denigrate and dehumanize just like the “N” word?”

MACFARLANE: My first response would be it’s not a human being, it is a cartoon. But you know, I think — this is — this was a touchy area because the idea was, keep in mind, this is a play within a play. And this is an instance where you see the Griffin family in the audience reacting and in a way that is — they themselves are a little put off and we have done this a few times on the show in which there’s something that’s done in extreme — you know, one could argue questionable taste but you got to have somebody there who’s reacting to that in a negative way and that’s something that we sort of tried to include with Brian and Chris sitting in the audience reacting wide eyed at this show. It is kids putting on a play. You know, whether the — whether that term is denigrating is for the viewer to judge.

MacFarlane’s elliptical answer indicates to me that he has never considered the question.  He wasn’t asked about the show, he was asked about the epithet.  Moreover, the scene did not have people appalled: The audience of the supposed play laughed uproariously when, “Terri” having been called a V, responded, “We hate vegetables!”  Moreover, if the show had the kids put on an old fashioned minstrel show that used the N-word—which he almost certainly would never do, and if he did, it is unlikely it would ever be aired—would he ever just reply that the denigrating nature of the word is “for the viewer to judge?” Not on a bet.

Some concerted consciousness raising is clearly required.  We have to help people understand that using the V-word to describe people with serious cognitive disabilities is as hateful and dehumanizing to them as using the N-word is to people of color, the F-word to gays, or the C-to women.  The time has come to retire it from common and acceptable usage, just as we have (or are doing) with the others.
0
Print
Email
Prev Article
Next Article