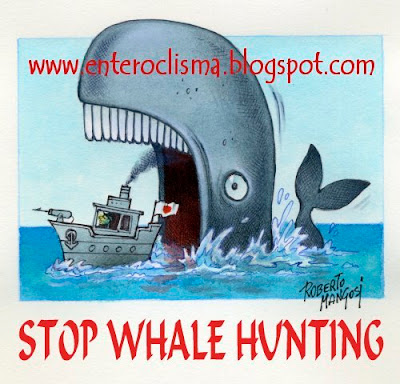 The anti human exceptionalists are—rather desperately, it seems to me—ever pretending that animals are like “us,” even as they say there is nothing special about being human anyway.  And now, the effort to stop whaling has scientists in high anthropomorphic gear about pods of whales being “tribes” and alleged cetacean personhood. Latest example, New York Times science writer Natalie Angier, who argues that we should “Save a Whale, Save a Soul:”

After two years of transcontinental haggling, the commission had been expected to replace today’s hunting ban with limited hunting quotas. Supporters of the policy change had argued that by specifying how many whales of a given species could be sustainably harvested over a 10-year period, and by tightening or eliminating current loopholes through which whaling nations like Japan and Norway kill the marine mammals for “scientific” purposes, the new measure would effectively reduce the number of whales slaughtered each year.

Yet many biologists who study whales and dolphins view such a compromise as deeply flawed, and instead urge that negotiators redouble efforts to abolish commercial whaling and dolphin hunting entirely. As these scientists see it, the evidence is high and mounting that the cetacean order includes species second only to humans in mental, social and behavioral complexity, and that maybe we shouldn’t talk about what we’re harvesting or harpooning, but whom.

To show you where Angier is coming from, SHSers may recall that the last time I blogged about her writing, she ridiculously opined that plants are the most ethical life form on the planet because they live without killing.  I guess she forgot that ethics requires rational analysis and the intentional creation of moral codes, activities in which only humans are capable of engaging. Oh, and what about those cruel venus flytraps?  They digest their prey alive!

Here’s the thing: We don’t need to go through the mental contortion of making whales people too in order to support an international treaty banning commercial whaling.  Human exceptionalism supports it based on our duty not to treat animals cruelly or cause animal suffering for little human benefit.  The need for whale meat is very low and the cruelty of the killing method very high.  That being so, it doesn’t matter that a pod of killer whales once seemed to play with dead salmon (discussed in Angier’s piece).  As a matter of applying basic animal welfare principles, the arguments in favor of a commercial ban are clear and convincing.
0
Print
Email
Prev Article
Next Article