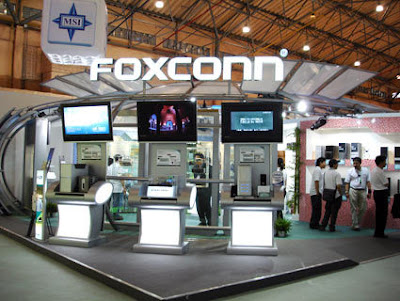 We have been told by the Davos set, people like Thomas Friedman, that we should be more like China—and then we could build worker friendly green industries on the double time!  Of course, China’s near slave labor pool of “migrant workers” helps the country, shall we say, keep production costs low.  And the chickens are beginning to come home to roost.  From the story:

As Taiwan-invested Foxconn promises to upgrade living conditions at its enormous electronics factory in the southern Chinese city of Shenzhen after a spate of employee suicides, experts are calling for a rethink of traditional sweatshop business models amid a wave of industrial action. Foxconn, which assembles Apple’s iPhone, said Sunday it had signed an agreement with two property management companies to take over the running of on-site housing for 450,000 of its migrant workers. Critics have blamed inhuman working conditions at the plant for the suicides, as China faces a wave of industrial action at foreign-invested companies over pay and working conditions.

The story doesn’t do justice to the plight of migrant workers, who are Chinese from different areas of the country. Here’s another take:

Social scientist Yang You-ren at Taichung’s Tunghai University began the Taiwan petition drive earlier this month. He said he and fellow academics are appalled by Foxconn’s labor policies. “Foxconn’s military management model, including scolding and sometimes beating front-line workers, helps drive isolated Chinese workers to kill themselves,” Yang told The Associated Press on Monday. “If the company does not put an end to that, there will be more suicides in the future.” In the petition, the scholars charged Foxconn with using a “concentration camp styled controlling system” and said the recent pay raises do not address the problem. In addition to Foxconn, they blame the Chinese government and Apple for alleged poor working conditions at Shenzhen.

Migrant workers are unable to move freely and live in what used to be called company towns, where they are totally dependent and subject to abuses and deprivations.  This is tyranny and a denial of human equality—and all of us are supporting it with our cheap I Pads and other electronic products.  And yet we hear so much from our betters in the ruling class, along with their courtiers, that China is the model.  Sure, if you don’t like freedom.

HT: I first heard this story in detail on the remarkably informative John Batchelor Radio Program.  If you want to learn what’s really going on in the world, listen to this show.
0
Print
Email
Prev Article
Next Article